Good morning everyone. There's a chance I may be parting with my 2006 Accord so am starting to research replacements. Must be a sedan/hatch/wagon with a manual transmission, decent feature set, and would like a stronger engine (previous car was a Saab 9-5 Aero so the Accord's been a huge step down). Desired price in the mid teens. GTIs (SE or Autobahn, don't want the base model) are the most common thing that show up on Autotrader etc, 2014-2016 with 45-70k miles typically. Anything worrisome about these cars? Reasons to target a specific model year over another? From what I've seen 2015 may have had a minor refresh so maybe target that year or newer. Problematic intake manifolds, intake valve deposits? Any suprisingly difficult basic maintenance tasks? Odd tools required to work on it? jeff

2015 was the first year of the MK7. 2015's and early 2016's had occasional turbo failures along with faulty water pumps that liked to leak way too early. Alot of the problems from the MK6 are corrected with the MK7's, but the occasional intake rudder failures happen. I've heard of some timing chain failures, but I think it isn't as common in the MK7's. The stock clutch is a real weak point, it will not hold up past stock power. Some upgraded heavier clutch/flywheel setups are known to cause crank walk, which means goodbye engine. Carbon buildup is still a thing unfortunately. 2017's and up are the best ones IMO, but may be out of your price range. The 2.0T EA888 is solid, powerful, and efficient IMO. In typical VW fashion sunroofs are problematic, which is why I went with the S model without one. My 2017 has been solid with nothing other than oil changes and tire rotations in almost 22K miles. As far as tools, triple square, hex, and torx sockets are a must.

I had a 2013 2 door hatchback 6 speed manual and sold it with 166K. My wife put a ton of company paid miles on it. Sold it to one of my brothers who is a Walmart pharmacist and doesn't wanna park his Acura at work. The odd tools you'll need are triple square sockets for some jobs: https://www.amazon.com/s?k=triple+square+driver+set&ref=nb_sb_noss The VW will not be as reliable as the average Accord. The 2015 GTI switched production to Mexico and started the MK7 version for the USA. The biggest issue I had was the dual mass flywheel going out. It was under warranty, but I chose to spend $1500 and future proofing the clutch and flywheel for the long haul. I spent $700 in other repair parts. The intake manifold failed at 82K, the oil separator failed and the high pressure fuel pump failed when my wife was 90 minutes from home. I kept a Bluetooth OBD II dongle with an app on my wife's phone. She read me the trouble code, described the symptoms, quick Youtube and internet research and I was off with the tools and a new fuel pump I got at a VW dealer to get the car back on the road. My wife was able to drive the car 50 MPH with the low pressure in tank fuel pump alone and replacing the HPFP only took 15 minutes. Some things on the car lasted longer than Japanese cars we've owned. The suspension never needed anything during my ownership, no struts nothing. The brake pads lasted longer and the rotors never needed turned or replaced. There are good videos on the issues these cars have. Humble Mechanic has good repair videos. I went 82K before cleaning the intake valves because of the intake manifold failing. The car didn't feel any slower or faster after cleaning the intake valves. I think VW mask it with the turbo somehow. There is more room in these GTI's than you think. They are built for tall Germans. I'm nearly 6'3" and fit in the car fine even with it having a sunroof. These cars aren't for everyone. It was a great car for my wife and I. VW put lots of engineering in these cars to make them a drivers car. The two stage intake manifold as an example gives the engine a torque curve flat as a pancake from 1700-5500 RPM. Mine would spin past redline to 7K without it ever feel like the power was dropping off.
D

Go get a brand new Alltrack. They can be found 6 speed manual or DSG is quite good. 2019s are still out there with a giant 72 month warranty and 0%. The AWD hardly hits the fuel economy much and being able to put power down at all times is worth it. Getting the 4 motion manual upgrades you to the 1.8 engine and 6 speed manual. I used to own a 275hp golf wagon 5 speed front wheel drive and the situations were limited where you could use the power. I suggest the base model so there is no chance of sunroof problems. My new alltrack is only 328.50 a month and i dont even see a payment till september 27th. So cheap it feels free. Its like 6-7k more than a 50k mile used model.
J

just my own practice, but if buying a used german brand vehicle i only get a cpo with longer warranty.

Manual transmission is going to severely limit your choices. I am a big VW fan but warn people they are not usually like a Honda/Toyota where it's only oil changes and gasoline for a million miles. Here's a low mileage V8 RWD Tremec manual that will burn down a GTI on the track. Remember I'm a VW fanboi.. https://www.cargurus.com/Cars/inven...dEntity=m22#listing=266241619_isFeatured
D

I considered buying that very CTS-V until i got the interest rate from my credit union for something that old. Also you can easily break differentials on those and no cheap way to upgrade it. New Alltrack is way cheaper due to the free money 0% 72 months. Manual VW does cut the search down a lot and the clutches need upgrading if you tune it.
E

I have a 2007 Accord sedan with the V6 6MT. It has lots of power. That's why I bought the V6. I've been thinking about a GTI too (though I'll be keeping my Accord). The GTI has lots of positives - hatchback, interior room, handling, fuel economy. I'm just not sure I can get over the reliability and repair cost questions. Other new cars I've been considering are a Honda Accord with the 2.0 and 6MT. It has good acceleration, lots of interior room, handles pretty well and gets decent fuel economy. Another option would be a BMW 230i which is also available with a 6MT, though interior room isn't great and BMWs can be expensive to own. And of course there is the Tesla Model 3 which has only 1 gear forward, and is plenty fast.
G

Good info everybody, thanks! Yes I'm aware the manual requirement will keep the pickins slim. My wife and I spent about 3 months back in 2009 looking for an Accord EX-L with the manual, finally found one and it's been great. I'm not afraid of something requiring a little more maintenance than the Accord, just don't want something that's sorta guaranteed to start having expensive parts fail on a routine basis. Sounds like I should stick to 2015s and newer? Stretch for a 2017 if possible? Certainly won't be buying something older than my Accord and I'm pretty sure newer CTS-Vs will be well outta my price range

I have seen ATSs with the manual here and there. I have also seen some A4s and 3 series BMWs, more in the 2012-2014 model year range. There might be another thread about those depending on how this goes. The Alltrack isn't exactly my kind of car

Zero chance I'd do any power mods on the car so if the stock clutch can handle the stock power I'll be fine. My Saab was a front driver, 250hp turbo and I loved it. jeff
D

Stock power GTI clutch will be fine. Buy at least a 2016 for the carplay head unit. They are so easy to tune and yield so much extra power that its very likely a used one has been flashed or ran hard with a JB4. I had APR on my sportwagen and the slightly larger turbo from the GTI. It ran fantastic. But even stock GTI power from a front wheel drive only is too much to use unless your doing a lot of highway. I had to be in 3rd gear to reliably have traction. This was summer 235 wide tires too. Other than costing too much, the Golf R would be perfect if you dont like the sportwagen or alltrack styles. If they made a 4 motion GTI, i would have bought that.
D

Here is the first used manual GTI ad i opened. 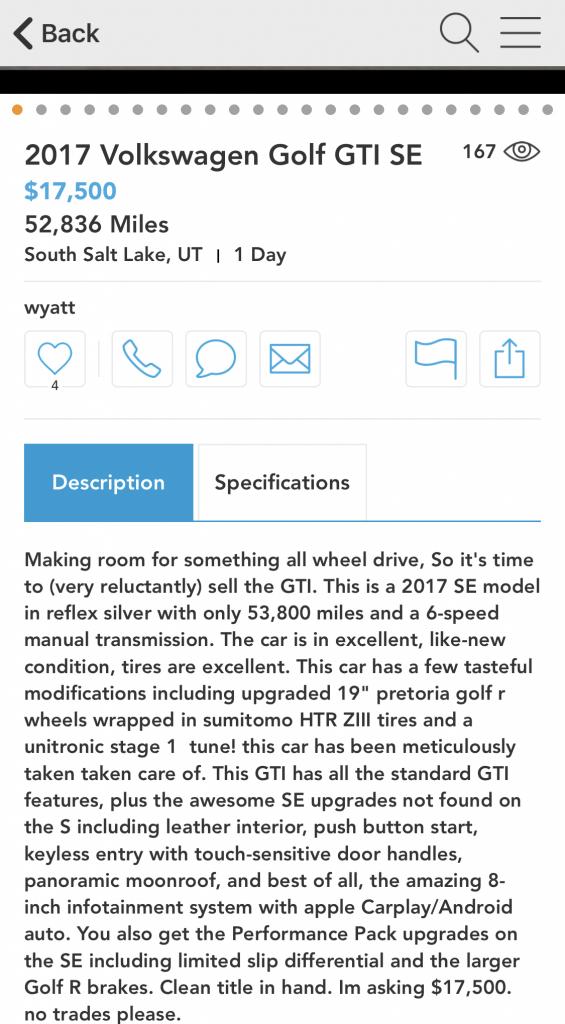 As you can see, its modded, and he wants an AWD. Not saying you cant find a stock unmolested manual GTI but it will be rare. Especially in a well equipped perfomance pack lsd model like this.
J

I'd look for a 2016 or newer. You'll have Android Auto/Car Play, and the few turbo issues seem to be more prevalent with the 2015's. I had a 2016 Autobahn, which was trouble-free except for the lack of traction after tuning it... I sold it and got a Golf R. Problem solved! The MK7 VW's are pretty solid overall. I'd look for one with the lighting package, which makes a massive difference. The Performance Pack is nice as well. The one listed above in Utah actually looks pretty good for the price!

If I was going down the hot hatch road again the Civic Si, Cooper S, GTI, and Veloster N would all be on my list. I think that the GTI is the most well rounded of the bunch, followed by the Si, MCS, and Veloster N. The Fxx MCS use the BMW modular engines and aren't as problematic as earlier models. The Civic and Veloster are probably the best value. The Veloster N is so much fun it almost makes me want to get another hot hatch. Having said all that, the GTI is a legend for a good reason.
You must log in or register to reply here.