The Next Generation M1 Macs

So, Apple announced a couple of much-anticipated models today. All are MacBook Pros and here are the highlights:

The specs just are across the board outstanding, and are basically murdering the Intel and AMD mobile competition while keeping a ~20 hour battery life and running extremely cool. After using the M1 for 8 months, it always catches me off guard just how hot my Intel Macs are when I need to get one back out.

There are some good and not so good features in my book:

1. The M1, to me, is handicapped by only being able to drive one external display. Even a low end 2011 Macbook Pro can drive two, and when I'm docking/using as a desktop replacement this is actually a big deal to me. The new 14" and 16" models can run a couple of 4K or other high res displays-I think how many depends on just how many GPU cores you get

2. As mentioned, 16gb RAM standard, option up to 64gb on the M1X models. The first gen should have come standard with 16gb, especially given the SSD thrashing issues that have been there.

3. The touch bar is gone, thank goodness, and we have a real row of function keys back. There are some good elements of the touch bar I wouldn't have minded seeing retained, but on the whole I find the touchbar causes me more problems than it solves and I think removing it was good.

5. Charging seems well thought out. First of all, it can still charge via USB-C, which is nice for those of us who gave in, bought something like a PD dock, and appreciate the convenience of 1-plug docking. Also present, though, is a 3rd generation Magsafe port. I'd hoped it would either be a resurrection of Magsafe 2, or else pin-compatible with older Magsafe(Magsafe 1 and Magsafe 2 are electrically the same-MS2 is just a shorter and wider magnetic ring so all that's needed is a simple passive adapter). Magsafe 3 looks just like the others, but instead is a separate cable that plugs into a USB-C charging brick.

The dual-mode charging is welcome to me since, as I said, USB-C charging is great at your desk but Magsafe to me shows its strength when truly using it as a laptop. my M1, my first USB-C Mac, has taken a few tumbles, several thanks to the dog, that Magsafe would have saved.

The technology looks superb, and I'm excited to see one in person.

I'm struggling to see why it was even necessary, much less the size it is. On iPhones, the notch makes space for the FaceID sensors(which are more complicated than just a camera-the tech behind it is actually really interesting), speaker, and Facetime camera. The laptops don't have or need a speaker there-you're not holding the screen up to your ear, and they don't have FaceID. Also, there's still a decently generous bezel, so it's not like space couldn't be made for the camera. That makes the notch completely illogical, and I'm afraid it's an aesthetic choice that's going to interfere with how I personally actually interact with my computer. I put a lot of stuff in the menu bar, and looking at my screen now I can see that the notch wouldn't leave room for a lot of it.

I love the computer, and to be honest I was ready to hit buy, but I want to see one in person. As stupid as it may sound, the notch may be a deal killer for me...

I’m glad to see they brought ports back. I’m bummed that they didn’t put the new processors into a 13” MBP or MBA. My 2010 MBA is getting too slow to do much, while my 2013 MBP is still great. I’d like a thin, light replacement for my MBA, and either the 13 pro or air would do… but I want the external ports and the new processor… and not a $2000 14” unit.

I can wish, right?
H

I love my M1 Air for just daily use! The new Pros have to be wicked.

I have seen a few strange issues with M1 Macbook Pros here at work, a few times it required replacement of the device by Apple. Also not impressed by the ability to only run one screen. Otherwise they are impressive. I'm typing this from my 2020 MacBook Pro with i-5, it's been a great machine.

jeepman3071 said:
I have seen a few strange issues with M1 Macbook Pros here at work, a few times it required replacement of the device by Apple. Also not impressed by the ability to only run one screen. Otherwise they are impressive. I'm typing this from my 2020 MacBook Pro with i-5, it's been a great machine.
Click to expand...

Yeah I dont get the one screen thing. I thought that all the transistors and shared memory was intended to support some pretty powerful GPU functionality. What is the bottleneck?
B

JHZR2 said:
Yeah I dont get the one screen thing. I thought that all the transistors and shared memory was intended to support some pretty powerful GPU functionality. What is the bottleneck?
Click to expand...

It's been a mystery to me as well, and fortunately is fixed in the new ones(at a price).

Back in 2011, the 13" MBP with its not-that-great Intel HD3000 integrated GPU was only capable of driving two screens. Here was the thing with it, though-you could still connect two externals, and if you did the internal screen would just turn off.

Here's one I set up not too long ago as a proof-of-concept, since those systems have become rather popular among vintage Mac tinkerers(and it's scary to me to think that they're now considered that considering that one was my first Mac) since they're the newest portables that can run Snow Leopard.

In any case, when they were current there was a lot of discussion about the dual display capability, and no one would believe me when I brought it up although I never actually did it back in the day since I couldn't afford the pieces that were required. It needs to be connected a VERY specific way via the Thunderbolt port, but here's mine running a 27" Apple Thunderbolt display and its older 27" Cinema display cousin 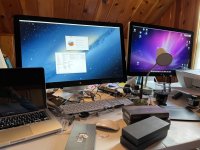 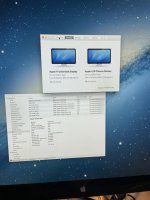 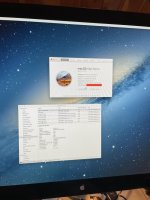