They look too bulky and gimmicky to me but who knows. I wont be spending money on them any time soon.
L

Are you talking about tool LW11 on page 426? It's pretty unique looking. I dare challenge their claim of "removing even the most worn off lines and fittings"
G

Yes, the LW11. I agree, it is bulky and gimmicky. When I first saw it I did not believe it was a real SnapOn tool that is listed in a SnapOn catalogue, I thought it was an instance of a respectable brand name prostituting their brand for money. Costco has SnapOn and Kawasaki branded items at Costco that have nothing to do with the companies except the manufacturers of these products paid fees to SnapOn and Kawasaki for the use of the names. The reason the LW wrenches interest me is that they are somewhat similar to butterfly line wrenches and I have had very good performance from butterfly wrenches.

I recently had to replace a ABS modulator valve assembly on a Freightliner truck. The flare nuts were rusted on since the unit is mounted on the frame under the truck and exposed to road salt. My Craftsman line wrenches were rounding off the nuts. The 11 mm Craftsman wrench provided a tighter fit than the 7/16 wrench and even that could not budge the nuts. The 11 mm butterfly socket took off all eight nuts. I don't have a SnapOn line wrench, perhaps it would have taken them off. I highly recommend the butterfly sockets, they look gimmicky too, but, try them.

George this is what you need from Hazet. They are reinforced on top with a very compact profile but will not round off a nut. Pricey but what pro tool isn't. 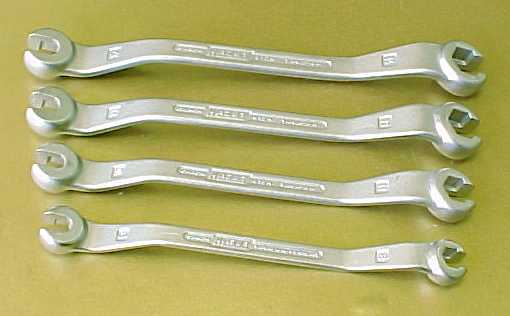 Originally Posted By: Trav
George this is what you need from Hazet. They are reinforced on top with a very compact profile but will not round off a nut. Pricey but what pro tool isn't.

Good Looking set of wrenches. I might just have to add them to list of things to get. :--))