Hi Forum, the next oil change is due, and I have not even told you about the last one!

Shocking! Let me get that sorted. As mentioned in the thread of the last UOA, I did not change the oil in spring but decided to double the interval. It was not clear yet at the time whether "double the OCI" would be based on the service manual (which prescribed 7500km intervals) or the actual intervals I had been dricing for the last >200.000km, which were ~10.000km. In the end, the oil stayed in the engine for 19236km (that is ~11953 miles for our metrically challend readers). A short reminder on the engine: the B202L is the turbocharged 16V DOHC version of the SAAB H-engine. 2 litres of displacement, oil-cooled Garrett T3 turbocharger, a small intercooler and the world's first electronically controlled boost management system. Fuel injection is a Bosch LH-Jet 2.2. The car is eqipped with an oil cooler. Total capacity of the oil system is 4,5 litres, of which you change 3.8. In stock form, the engine should do 160hp. We have dyno'd mine at just a tad above 190hp, but I have had some electrical problems with my boost control lately which hears knock where there is none, so I rarely have full boost nowadays. Top speed consequently is down to a measly 210km/h (from 220). Driven hard, this engine can be quite demanding on the oil, as this testing picture nicely illustrates. A full throttle run with a "semi-synthetic", that is mineral 10w-40 from Berlin to Munich and back and your oil is toast - it will be pitch black, you will have burned ~1 litre and you may well develop an oil pressure problem at idle. Been there , done that. With the switch to synthetics (either GtL or PAO), these problems were gone. My driving profile historically consisted almost exclusively of long distance commutes (2x580km nearly every weekend). In the last months, a lot of shorter trips (10km) in the city have been thrown into the mix, but I make sure the car gets thoroughly warmed up every day - if necessary I drive a detour on the way back home. Car also sees redline frequently (that's what on-ramps are for), and while most of the distance is done at a leisurely pace, this OCI includes some 3000km of rather quick left lane Autobahn stuff. Observations: 1) the oil got quite dark. Here is how it looked on the dipstick at the end of the interval: 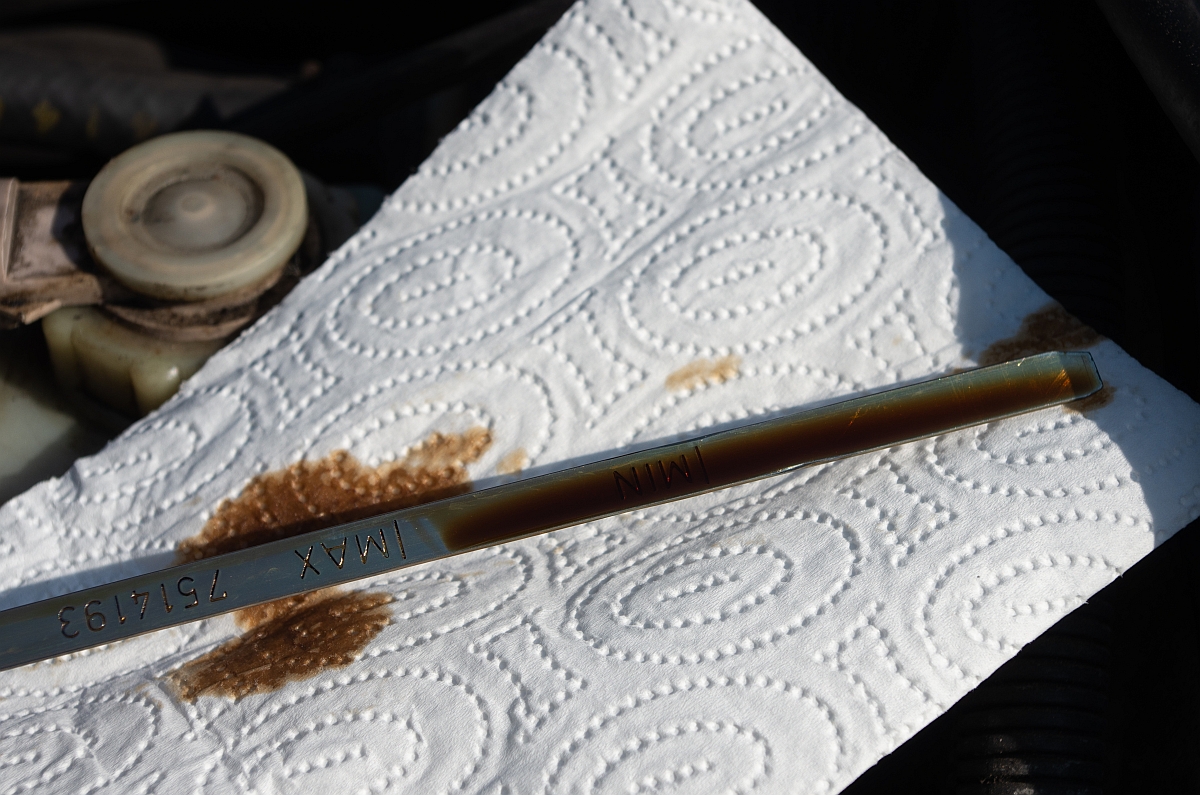 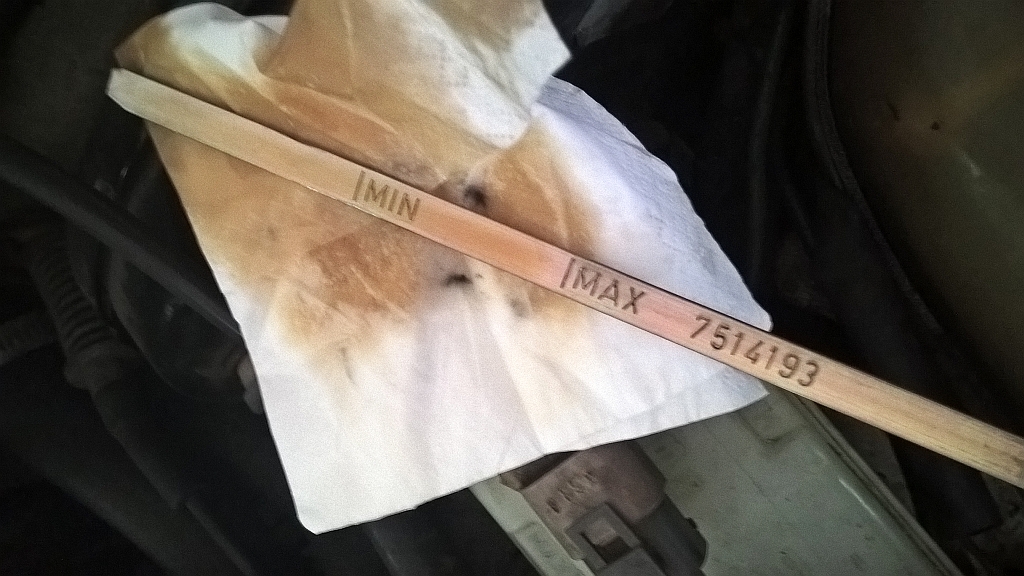 2) during the last few thousands kilometres, the hydro ticking came back occasionally. During the last years and following a gearbox swap/rebuild (which on a classic 900 means another, in this case used and probably not 100% clean oil pan...) the engine had developed hydraulic lifter tick with one lifter anytime the engine was not brutally hot. That was why I switched to this 0w-30 in the first place. I wanted an oil as thin as possible why still having a reasonable HTHS (3,5 or higher) - rod bearings are where these engines usually fail, so I was not willing to take any risks and go lower than a C3 oil. After the oil change, hydro tick disappeared again. 3) there was siginificant oil consumption, which could be seen clearly on the dipstick. The engine had been slightly overfilled (4 litres instead of 3.8), which meant it had read to the "X" of the max mark at the start of the interval. Total oil consumption was less than 1 litre and no fill-up was required. Nevertheless, a healthy B202 will only consume oil when you stay above 5000/min for sustained times; and driven sensibly, you shall not see any drop of the dipstick level at all during a "normal" interval. So, here are the results:

OIL Shell Helix Ultra Professional 0w-30 AV-L MILES IN USE 11953 (19236km), 8 months MILES 391609 (630233km) SAMPLE TAKEN 18/06/09 (date format for the civilized part of the world: 06.09.2018) FILTER: Mann w712/80 wear metals (mg/kg) IRON 23 CHROME 1 TIN 1 ALUMINUM 4 NICKEL 0 COPPER 6 LEAD 5 ANTIMONY - MANGANESE 0 pq-index <25 pollution (mg/kg) SILICON 11 POTASSIUM 1 SODIUM 7 WATER (%) <0.1 IR-GLYKOL negative FUEL (%) 0.85 Additives (mg/kg) CALCIUM 1444 MAGNESIUM 8 BORON 236 ZINC 799 PHOSPHORUS 592 BARIUM 0 MOLYBDENUM 4 SULPHUR 1372 state of oil: visc. @40Â°C (mm2/s) 62.15 visc. @100Â°C (mm2/s) 11.89 VI 191 OXYDATION (A/cm) 2 NITRATION (A/cm) 0 SULFATION (A/cm) 0 dispergency* (%) 97 SOOT INDEX** <0.2 BN N/A * the german word was "SchmutztragevermÃ¶gen", hope I translated that right. ** the lab has introduced the "RuÃŸindex", an in-house tool to check for soot in gasoline oil, as soot from direct-injection engines will not show correctly in the standard test for diesel oils What do we see? - Iron has somewhat increased proportional with mileage. All other wear metals have increased only slightly, with the exception of lead. - oil has thickened. As we see nearly no oxidation, this mostly due to the lighter fractions evaporating. If this were due to a breakdown of VII, I'd expect more oxidation and nitration. - concentration of some additives has increased, while others are lower. That could indicate some evaporation of the lighter fractions of the base oils. It could also remind us of the tolerances of the process. A measurement may be precise, but that does not necessarily tell you how accurate it is. (That is also why I have decided not to obsess to much with the increased lead.) - TAN has nearly caught up to TBN. Conclusion: 20.000km seems to be the border to which I can push an OCI with my current driving profile. The oil itself could probably last longer - TBN and TAN are the limiting factor. I'd like to see this base oil with a full-SAPS add pack. This baseoil with the M1 0w-40 FS add pack should be sweet, but unfortunately, that will never happen (zinc limits for SAE 30...). On the other hand, this oil is dirt cheap. 5 litres can be had for 24â‚¬, so there really is no point in pushing it further. I might settle for 15Mm intervals, just to leave a little bit of wiggle room. Previous UOA: https://bobistheoilguy.com/forums/ubbthreads.php/topics/4899236 Filter: https://bobistheoilguy.com/forums/ubbthreads.php/topics/4857642/re-mann-w712-80-19236km-11955miles Article on my blog (with a little bit more - german - text and a few pictures): https://turboseize.wordpress.com/20...wechselintervalle-doch-nicht-so-schlimm/
Last edited: Oct 18, 2018

What an interesting post, thank you. Can't disagree with your methodology or conclusions at all, very nice work!

This is going to be my next fill, nice to see your results from a mid-SAPS oil on an engine originally specified for A3 oil.

The metal wear rate is good in an old Euro engine. Looking at the blotter spot and its dispersancy index ? of 97, this oil is still very robust. At residual TBN of 4.43, Blackstone would have recommended continuing oil service and I personally see no problem with continuing service of this used oil . Anyway, in relation to Saab's old school recommended OCI, you have indeed done very well.

Yes, I have two follow-up UOAs. Have not yet gotten to publish them. The last year was a bit crazy, workwise.
You must log in or register to reply here.