Debating what to do here, would like some input. The Dakota is still on its original tires, have about 55K on them and based on the tread left, I'd estimate another 20K easy. The Dak is 2wd and, to be blunt, the Goodyear Eagle LS that they came from the factory with stink. Lots of complaints over on a Dakota forum I used to hang out at so I know it's not just me. Here's the dilemma; do I bite the bullet and buy new tires now before they wear out? Since they're original tires, they're appoaching 8 years of age, and I think the tire makers now recommend replacing tires after 5-6 years whether they're worn-out or not. Is there any truth to that line of thinking or is this one of those things that companies do to keep their legal departments happy? The tires have 2 strikes against them, their age and the fact that they stink, but I have a problem throwing out a set of tires that aren't worn out. Suggestions? Other than getting a life that is....

I just replaced a set on my wifes truck with the same specs as yours. The difference is that these tires kept springing leaks everywhere. As tires age, the rubber starts breaking down whether the tire was used or not. When the rubber breaks down you run a higher risk of tread separation. I would have them inspected in the least, even inside, but would strongly consider replacing. A couple hundred dollars is easy to live with compared to crashing on the freeway due to an unexpected blowout.
K

Since the tires are and integral part of me staying on the road instead of flying off and killing myself I make sure to check the manufacture date whenever I buy tires. I had bought some tires about 3 months before I found out about this info. I checked my tires that only had a few k miles on them. They were 5 years old. I took them back and told them I wanted new replacements. They switched them out without a hassle. Here's some info: Check the tires on your car. How do they look? Plenty of tread, no bald spots, no wear and tear? If that’s the case, you’ve probably got a great set of tires with years of life left on them, right? Well, maybe not. Those tires could actually be ready to break apart at any moment. I don’t like buying new tires. Right now, I’m shopping around for a good deal because the quote I got from my local tire store was close to $800. But I’m wary of "deals" on tires because they actually have a use-by date. Most people don’t know that. It’s not advertised and there's no law protecting us (more on that later). And worse still, the consequences of driving on old tires can be deadly. This is not just about getting the best tires for your money…it’s about getting SAFE tires. In Europe and Asia, tire manufacturers inform customers about the dangers of old tires, and the very real dangers of driving on ‘new’ tires that are actually six years old, or even older. But here in Uncle Sam, we’re being kept in the dark. And that’s hardly surprising, because tires are a billion dollar business, and no company wants to destroy tires and see profits literally go up in smoke. They look new. They smell new. They are new, right? Well, no. The rubber in the tires dries out over time. This can lead to cracking, greater stress on the tire’s infrastructure and “catastrophic failure.” When that happens, the tire can literally fall apart on you while you’re driving. The tread comes away from the tire quickly and violently. As you can imagine, this can be disastrous; even deadly. So far, more than 100 deaths have been attributed to old tires, and there is currently a lawsuit against Bridgestone/Firestone for selling old tires as new. It’s alleged that these tires were responsible for a crash which left one man dead and a family without a father. And yet despite all of this evidence, the National Highway Traffic Safety Administration (NHTSA) has refused to impose a six-year shelf life on tires. All they have issued is a warning . Why? We could speculate, but money talks, and how many tire companies are ready to junk thousands of tires every month that could easily be sold as new? A hidden camera report by ABC’s 20/20 , aired on May 9th, show revealed some shocking facts about so called ‘new tires’ currently on sale. Some tires were up to 12 years old, and were on sale at Sears, a reputable store. It makes you wander what stores without the big name and reputation will carry. You can watch the complete section below, this is 10 minutes of your time very well spent. So, what can you do? First, check your tires. Whether you’re shopping for new tires, riding on new tires, or have tires that are several years old, check the actual age of your tires asap. Knowing where to look and how to translate the code is simple enough, but it does vary depending on the age of your tires. The highlighted section below is the complete information I got from TireRack, the place where I buy my tires and a store that is very forthcoming about both tire age and longevity: When it comes to determining the age of a tire, it is easy to identify when a tire was manufactured by reading its Tire Identification Number (often referred to as the tire’s serial number). Unlike vehicle identification numbers (VINs) and the serial numbers used on many other consumer goods (which identify one specific item), Tire Identification Numbers are really batch codes that identify the week and year the tire was produced. The U.S. Department of Transportation (DOT) National Highway Traffic Safety Administration (NHTSA) requires that Tire Identification Numbers be a combination of the letters DOT, followed by ten, eleven or twelve letters and/or numbers that identify the manufacturing location, tire size and manufacturer's code, along with the week and year the tire was manufactured. Tires Manufactured Since 2000 Since 2000, the week and year the tire was produced has been provided by the last four digits of the Tire Identification Number with the 2 digits being used to identify the week immediately preceding the 2 digits used to identify the year. Example of a tire manufactured since 2000 with the current Tire Identification Number format: 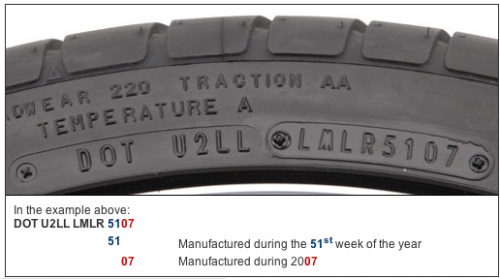 The use of a partial Tire Identification Number on the one sidewall (shown above) reduces the risk of injury to the mold technician that would have to install the weekly date code on the top sidewall portion of a hot tire mold. Tires Manufactured Before 2000 The Tire Identification Number for tires produced prior to 2000 was based on the assumption that tires would not be in service for ten years. While they were required to provided the same information as today’s tires, the week and year the tire was produced was contained in the last three digits. The 2 digits used to identify the week a tire was manufactured immediately preceded a single digit used to identify the year. Rxample of a tire manufactured before 2000 with the earlier Tire Identification Number format: 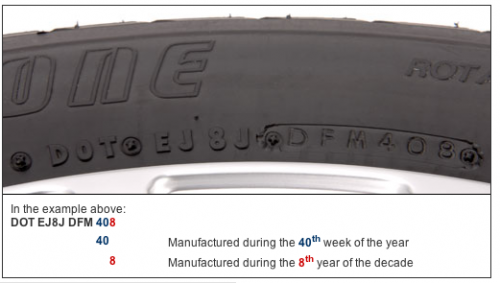 While the previous Tire Identification Number format identified that a tire was built in the 8th year of a decade, there was no universal identifier that confirmed which decade (tires produced in the 1990s may have a small triangle following the Tire Identification Number to identify the decade). So, you have old tires. What next? If you’re the OCD frugal shopper I am, you’ll have kept all of your receipts from the past few years for your major purchases (and I consider tires to be one of these). Most of us hang on to these receipts because tires come with a warranty, anywhere from 20k to 65k miles. Contact the store, garage or website that sold you the tires and explain the situation. If your current tires have had plenty of use, you may still be entitled to at least a discount on a replacement set of tires. If you’re a good haggler, you may get a new set free of charge. And if you have just bought your tires, you should absolutely demand a replacement set that were manufactured recently.
Last edited by a moderator: Jul 14, 2009

Thanks for the input. I plan on running the truck into the ground, so getting the most out of the replacement set will not be an issue.

I've noticed the last couple of times in the rain the truck was even more skittish than it had been in the past, so it looks like I should get a new set just to make sure I actually can drive the thing into the ground instead of wrapping it around a tree due to loss of traction.....

When you are getting a new set, try something that has lower trend wear rating so you will wear it out instead of rotting it out. This also has the benefit of better traction (usually traction is reverse proportional to trend wear).
K

AdRock, good info on date code reading. It has been futher determined that age is more of a problem in the sunny and warm climes than up north. Whereas there is talk of a six year expiration date for Florida, Texas, and Arizona, ten years would be acceptable in the snowy north. I personally had to trash four year old tires because of rot. Yet on another car I'm riding on nine year old tires that barely have any crazing. Do you park in the sun?... shade?... garage? This is not a black and white issue. There are many variables as to when tires must be replaced. Imposing a flat six year expiration date by law would be a hardship to many. For one, that means my classic car garaged here in the North would need a new $600 set of tires every 3000 miles (more expensive that the fuel cost!). My other cars don't see many miles either, around 5K per year. It's really up to the individual to get on their knees an put their eyeballs to where they can properly inspect their tires and hopefully make the right decision as to when to replace them. Because few miles are put on my cars and I run the risk of having the tires rot out before they wear out, I now do what PandaBear mentioned and buy tires that have more traction (and a lower wear rating).
R

Thanks, CR has useful information also.
You must log in or register to reply here.