In my 1951 Chevy, we installed a rebuilt SBC 350. When we first installed the motor, there was a slight valve leak on #8. The engine came to me as a "brand new rebuild" but I've since started to learn that it may have been slightly used with less than 250 miles and the previous owner decided to go another route. Anyways, I do not know if break in oil was used correctly after the rebuild or not. So I ran conventional 10w30 for about 500 miles along with a valve adjustment and then swapped to Mobil 1 10w30. After I've been driving on this motor for around 3000 miles since this change and we seem to have finally eliminated any signs of an issue in #8 (no oil usage, no oil on spark plus, no smoke from exhaust). I'm contemplating swapping from Mobil 1 to Rotella and wondering if T4 or T6 would be more appropriate? We are running T4 in our 56 Chevy with strongly built 355. My motor is a mild build, RPM stays less than 3000 on a regular basis. I run right at 2500 RPM on the interstate doing 75 MPH, but normally run around 2000 RPM over longer distances at around 68 MPH. Would a better option be to continue with Mobil 1 and swap the last quart for a single quart of Rotella or possibly a high mileage oil to provide some additional protection? I'm also considering a change from 10w30 to 15w40 or 10w40 with our higher temps in south Georgia. Appreciate any feedback provided.
M

T4 in either variety. I would be running the 15w40 because there is no reason to run thin oil in a SBC in GA.
C

The 15w is better above freezing.

Get the T4 15W-40, you don't need a 5W-XX for anything in Georgia. The T6 would not hurt anything either though, and if you prefer synthetic, run that.
S

Another T4 15w-40 recommendation. A stout oil that will work with the old school engine. Even on the coldest days in Georgia it should not be an issue.
B

OK, this is a low mileage engine. Either a crate motor, or a rebuild. But that means the bearings were done. So they are now around 0.0025" and they do not need 40 grade. I'll also bet this thing sits a week at a time between outings ... So it may exhibit some "drain-off" with synthetics. Meaning that it might be slightly noisy on cold start ... Dino's are usually better for engines that sit. They maintain a stronger capillary fill. I'd go to Delo 400 15W-30 SD (severe duty) or Valvoline VR-1 xW-30 (Silver Bottle). Both have very good add paks for flat tappet cams. Since you did not state the cam config, I'm assuming flat tappet ... I would not mess with less than 1,100 PPM Zn & Ph with an old school SBC. Just not worth it ...

There is absolutely no proof that synthetics lube better than quality Dino oils. There are no professional papers or engineering studies that state this. And there are a few million over the road trucks with million mile motors on good old dino HDEO

Synthetics are good at heat rejection and long change intervals. As long as this car will not be raced (roundy round for hours at a time), or you are not going to try for 10,000 mile oil changes, they buy you nothing ... Keep it simple, and have fun

Originally Posted By: Linctex
Another vote for T4 15W-40 (actually, any 15W-40 HDEO, will be fine, it doesn't have to be Rotella)
Well, Rotella is a safe bet as the Zddp level is still a good 1200ppm, which is one of the main reasons to use a HDEO in an older car.
V 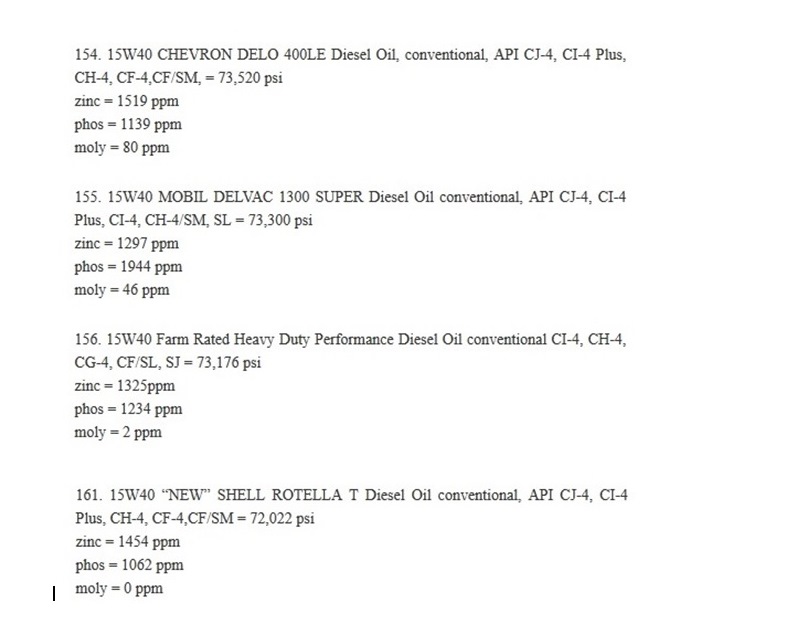