Originally Posted By: Soggydog
quality part but is often expensive. Ive never been disappointed with Guardian, Saint Gobain, Carlite/Carlex, AGC or Nippon brand windshield. Some of the Chinesse made brands (Fuyao, Benson) were making improvments in fit and quality when I left the industry. I think Fuyao (fy) is an OEM for Hyundai and Kia.
FYG is also OEM on GM, Mopar, and now BMW, VAG(VW and Audi), Volvo. Recently, Honda and Subaru are using FYG glass, Moraine isn't that far from Honda's Ohio core. I've been seeing FYG as the OEM windshield on the newest Japanese-built Imprezas and Crosstreks, Subaru was predominantly Central/Carlex.

look at the corner of the windshield. If you don't see the manufacturer's name, then look for a DOT number. Google that, and you'll find out who the OEM is. Independent glass repair/replacement shops can order from the OEM, which can be surprisingly inexpensive.
B

Watch for glass distortion on the aftermarket glass, first replacement on the wife’s Jeep was bad, had that replacement changed the following weekend.
C

If you want made in USA by a US company, Guardian is only option. Guardian sells to Carlex, and others. Keys to the windshield are the coating between the two glass sheets that reflects infrared and provides desirable color, and sometimes the type of PVB that is used for the lamination. St. Gobain is the French government, PPG is now owned by Mexico, Pilkington is UK based but owned by Japanese, AFG is Japanese owned, not to mention the Chinese companies mentioned above. RAV4 I'm guessing uses an OEM windshield made by Asahi, which is a Japanese company. Should be a good OEM windshield if you want to go that route. If it was me, I'd try to find a Guardian made windshield, and if I couldn't I'd go OEM.
Last edited: Jan 16, 2018
N

My parents called me about their windshield, and I decided to go Safelite to make things easy on them and AAA. I requested no in-house glass, only Pilkington or FYG. I was about to call a CA-based outfit(All Star), but after seeing them install a PGW-branded XYG on a friend's car I'll pass. Some of the local outfits in the Bay Area tend to be hack jobs - I think anyone can walk into Mygrant and buy glass, and what's even scarier is that some places are using Chinese urethane as well.
A

Originally Posted By: nthach
I think anyone can walk into Mygrant and buy glass
Well, you do have to be in the trade or next to it. Body shop, car lot, garage, etc. I've bought over a dozen windshields from Mygrant and Service (the wholesale division of Safelite) over the last 5 years and replaced them myself. I have over $1,000 in glass tools and believe I do a better job then the techs working under a daily quota.
J

Originally Posted By: JTK
It may depend more on the make/model vehicle, but I've had good luck with Pilkington. Main thing is to avoid Safelite or chain places in general. Find a good local mom/pop glass shop.
^^^^^^this
N

The Safelite guy came out to the parent's today - I was quite impressed with his work, we were talking glass and workmanship. He told me a few things I shouldn't know and the last installer who worked on the van didn't bond the windshield in. He even had me help out. I was also glad to see this: 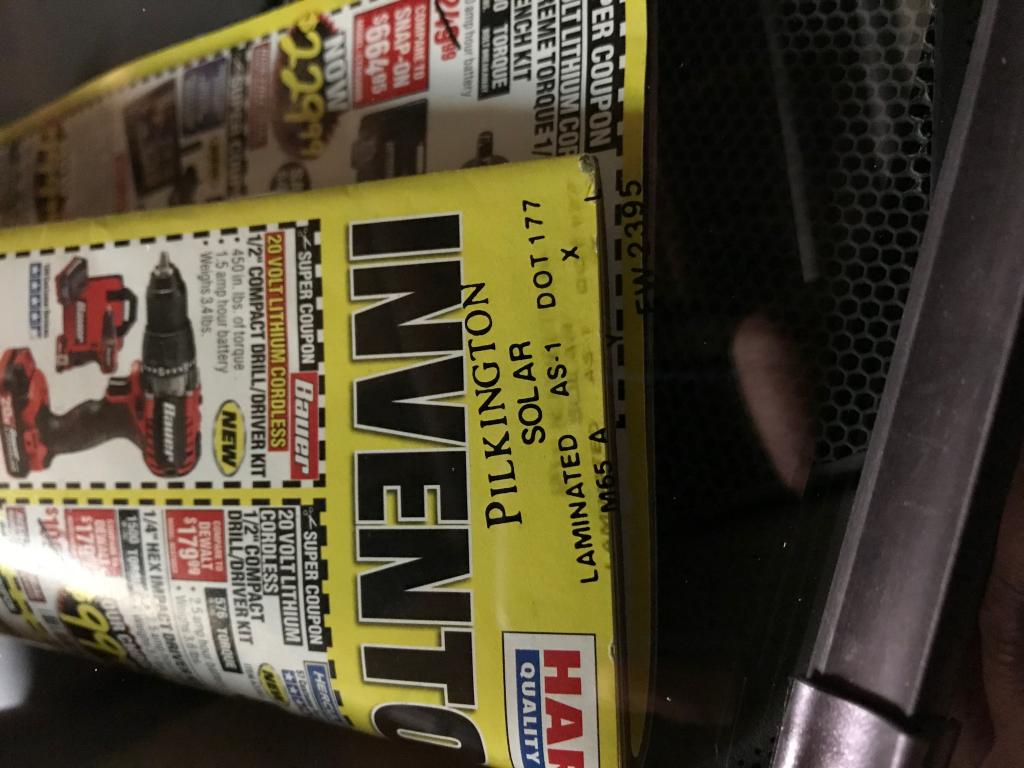 ^ since I can't edit, the tech asked me I'd like to give him a hand to set in the new windshield(after it was prepped, primed and a new bead of urethane was laid down on the pinchweld of course). I said yes, and after that was said and done, he told me I did pretty good for someone who doesn't do this for a living.

it varies. I install a lot of windshields at work in Class 8 Semi's and we generally use Fuyao glass but you can tell the quality doesn't match the OEM windshields (Pilkington or Guardian) or the XYG glass we sometimes get if we can't get the FY (Fuyao) glass. I'm not saying thats true for all windshield sizes for all makes. Just what I've noticed with the windshields I've put in for these trucks.
A

Originally Posted By: nthach
^ since I can't edit, the tech asked me I'd like to give him a hand to set in the new windshield(after it was prepped, primed and a new bead of urethane was laid down on the pinchweld of course). I said yes, and after that was said and done, he told me I did pretty good for someone who doesn't do this for a living.

Not too smart on his part. If the boss found out, he could be fired. Big liability issue. If you got hurt, or if there is any question on the installation in the future, the company could be sued. All glass installers have the tools to install the glass by themselves.
1

Fuyao has been utter Garbage in my experience. I've had 4 of them in my 2006 Silverado since I've owned it. Does anyone know of another supplier? The first was installed at the dealer 8 years ago, the 2nd & 3rd were done by Safelite and the 4th I had an independent shop do. The indy guy said that's all he knows of for the Chevy/GMC trucks and vans. The Glass cracks so easily, all it takes is a tiny pebble and the glass is cracked or chipped beyond repair and any bit of sand pits the glass. I've had the current glass for 2 years now and it's time for a new windshield. The pitted glass is annoying at night. We had the windshield replaced in our 2012 Ford Flex at the same time and it's also pitted and chipped but not cracks (yet), I am not a believer in this glass and/or company turning out quality glass. It might look factory and not have any distortion or waves but it just chips/cracks way too easily. We also have a 2004 Golf with the Original Windshield in it and it took until just a year ago to get a crack (here in Colorado it's inevitable, but the Fuyao fragility is just unacceptable).
N

I'd look at Pilkington - it's made in Mexico at their AGM plant that was a joint venture between LOF and Nippon Sheet Glass. LOF became a part of Pilkington and LNSG formed United L-N Glass in Kentucky to supply Toyota/Honda/Nissan/Subaru's US operations and Nippon Sheet Glass bought out Pilkington recently. Vitro/Crinamex would be another good choice as well. It's a Mexican glass company who also supplies GM, Ford, Chrysler, Nissan and VW. Vitro bought out the OEM business of PGW and recently took over the glass division of PPG. If you get a DOT 904 PGW or a DOT 476/287 part, it's made in the US at former PPG plants or Mexico by Vitro. IMO, since GM does use Pilkington/LOF and PPG/PGW/Vitro on their trucks, a Mexican-made Pilk or Vitro/Crinamex will be closer to the original DOT 15/18 glass. I also know Saint-Gobain Sekurit also has etched aftermarket pieces as well for German cars. I think you need to venture outside of Safelite and do it as a customer pay instead of insurance. Safelite will only install OEM-branded glass if you pay up. I'd still trust Safelite over a guy who works out of a truck for cheap but that's not saying much. If I had to choose between the three Chinese brands - FYG, XYG and Benson, FYG will get my vote. FYG can make good glass - it's now OEM on BMW, Volvo and VW/Audi/Bentley. Honda, Hyundai, Subaru and Toyota are now starting to install FYG from the factory. Their aftermarket stuff seems to be hit or miss. They now make glass in the US at the old GM Moraine, OH plant. It's DOT 1038.
C

Can I purchase replacement glass directly from the local Pilkington? Guess the generic answer is no, but do they sometimes sell to individuals?
A

I have an account at Mygrant glass and they don't sell direct to the public but have allowed somebody to pick up a windshield on my account for cash and I charged them $20 over cost. Maybe hang out at the warehouses and ask one of their customers if they'll buy one for you for a twenty.
H

Originally Posted by AZjeff
While traveling in the RAV4 yesterday we got a stone thrown into the windshield from the car ahead that instantly cracked. Weird since you can barely see a mark from the stone and it was small enough to be invisible coming at us. I've got 100% glass replacement so that's not a problem but I want OEM quality glass, not some wavy distorted junk. Are there any brands of glass as good as OEM or do I need to push for that? Because of previous occupations I'm probably more aware of distortions than some and won't have it. thanks.
I've had multiple new windshields over my 20+ years of driving. Never asked about quality, just gotten whatever they say matches with the sun blocking dots behind the mirrors and such. Never paid more than $300. Glass has all been "fine" but the moulding and plastic always ends up busted or pieces don't fit right after. My latest on a Forester has the plastic pieces up about 1-2mm so they rub when the hood opens. Thought about taking it back but it doesn't leak (which I've had issues with on other cars in the past) so I just pop the plastic pieces out before opening the hood. Risk reward I guess. I honestly can't be too mad given how tight the tolerances of the plastic pieces are on a new Forester. The glass isn't wavy either. Go with a place that's been around a while and that has a warranty. That's my opinion.
You must log in or register to reply here.