Remote keyless entry and the cost of batteries

So my wife finally found the second original key and remote for her 2002 Honda Civic. I'd gotten a couple of keys copied from the other original key, but they don't work to start the engine and will even set off the alarm if I open the door/trunk without using the remote (if the thing is alarmed via the remote). I was thinking of going out and getting a new key and remote at the dealer, but I hear they cost a fortune. When I drove her car, I always ran the risk of forgetting to give the key back to her. I also worried about losing the only known working key when we were on vacation. So the remote is at least 12 years old with the original battery, and it still works. I just popped it open for a look and the battery is intact without any leaks. I'm still going to replace it though. This morning I stopped at Fry's and bought a 2-pack of A23 batteries, but it turns out that it's A27 (I hadn't replaced one in a while). As far as I can tell, they're only made in China regardless of whose name is on the label. I'm not sure they're all the same quality though. The factory installed battery was from Gold Peak. I thought these 12V alkaline cylinder cells were originally for pagers and some compact garage opener remotes, but some remote keyless entry systems use them. Why use these? I know it's 12V, but I've gotten pretty good life out of 1 or 2 lithium button cell remotes. Frankly - this Civic remote has lousy range. The (Alpine) remote from my 2004 WRX uses a single CR2032 and I've been able to see it work from 500 feet away in a parking lot when I was in a high-rise building. The Civic is lucky if I can get it to work 25 feet away with nothing in between. I'm also kind of shocked at how much these things cost. $2.99 for a single A27 at an electronics store. Someone walking into AutoZone might even pay $6 for one because they're not sure where else to get one - other than a dealer which might have even have higher prices. I bought my lithium button cells in bulk (Maxell or Sony) from a large reseller on Amazon that has free shipping. I can get something like $2.25 for a 5-pack of Maxell (not some cheap Chinese battery that might leak) CR2032 batteries. The place I normally buy from has GP A27 in a 5-pack for less than $4. So where do you guys get batteries? I've got all these assorted electronics that use lithium button cells and buying in bulk makes sense for me. They also have a long shelf life (wish Maxell would put an expiration date on their packages though) so it's not a big deal to buy a bunch. Not sure about the 12V batteries, but I figure having some spares mean that we can swap them out in a couple of years. Even if it still sort of works, it's nice having a fresh battery because it increases range.
N

I recently paid $5 for a CR1620 replacement battery for our Mazda. Ridiculous.

I buy all such batteries on eBay. I try to stick with name brands and sellers who have lots of feedback history. Except for a couple of no name CR2032's that wound up being dead (out of a pack of 10) I have had good luck. The cost ends up being less than a dollar each so I keep them around as spares. CR2032 is used in lots of stuff so I always buy those in 10's. I have spare batteries for my Mazda remotes as well.
A

I too use Ebay for small batteries. As to the RKE, I've yet to change the battery on either remote. They are over 14 years old.
R

I buy batteries online or on ebay; they will be cheaper and of premium quality. Like 3-4 at a time with free shipping. If it's a reputable seller of batteries, they will also list the expiration date of the battery. For example swatchbattery.com or like you mentioned amazon. It's the same as oil. If you walk into the parts store and pay shelf price your 1quart of Mobil1 will cost you $9.79.
L

A friend of the wife's gave her some blinking Christmas ornaments last year. She said that she didn't really want them and told me to throw them away. On a whim, I cracked one open... whaddya know? It has a CR2032 inside, which is exactly what I need for my garage door opener. Can't speak for my key fobs, but I can tell you the cheapest way to get another type of pancake cell...
S

Originally Posted By: raytseng
I buy batteries online or on ebay; they will be cheaper and of premium quality. Like 3-4 at a time with free shipping. If it's a reputable seller of batteries, they will also list the expiration date of the battery. For example swatchbattery.com or like you mentioned amazon. It's the same as oil. If you walk into the parts store and pay shelf price your 1quart of Mobil1 will cost you $9.79.
Maxell is probably the highest quality lithium button cell manufacturer on the market, but they don't list expiration dates on their button cells. Not sure why. Sony lists expiration dates. They're mostly made in Indonesia now, but I'm pretty sure it's a Sony-owned/managed factory. I've bought Renata lithium batteries a few times just to be different. It does says "SWISS MADE" on it, but that's not necessarily a good thing. Their watch batteries have a reputation for leaking.

My research says this is an Audiovox Prestige ELVAT1E remote for use with vehicles with a factory alarm and optional remote starter function (OPTION button I guess). It doesn't say Honda anywhere on it. The number at the top is apparently the Audivox customer service phone number.

I'd also note that I have another remote for my WRX that's in long-term storage. I removed the battery years ago. The last thing I need is for the battery to leak from being stored too long.

Originally Posted By: NateDN10
I recently paid $5 for a CR1620 replacement battery for our Mazda. Ridiculous.
This is where I got mine. It is $6, but that's for a tear card of 5. http://www.amazon.com/Maxell-CR1620-Lith...=A19DY5EK03NION The picture is kind of old though. My experience is that it does come with the latest packaging (second photo - sold as $10 for 10 batteries). 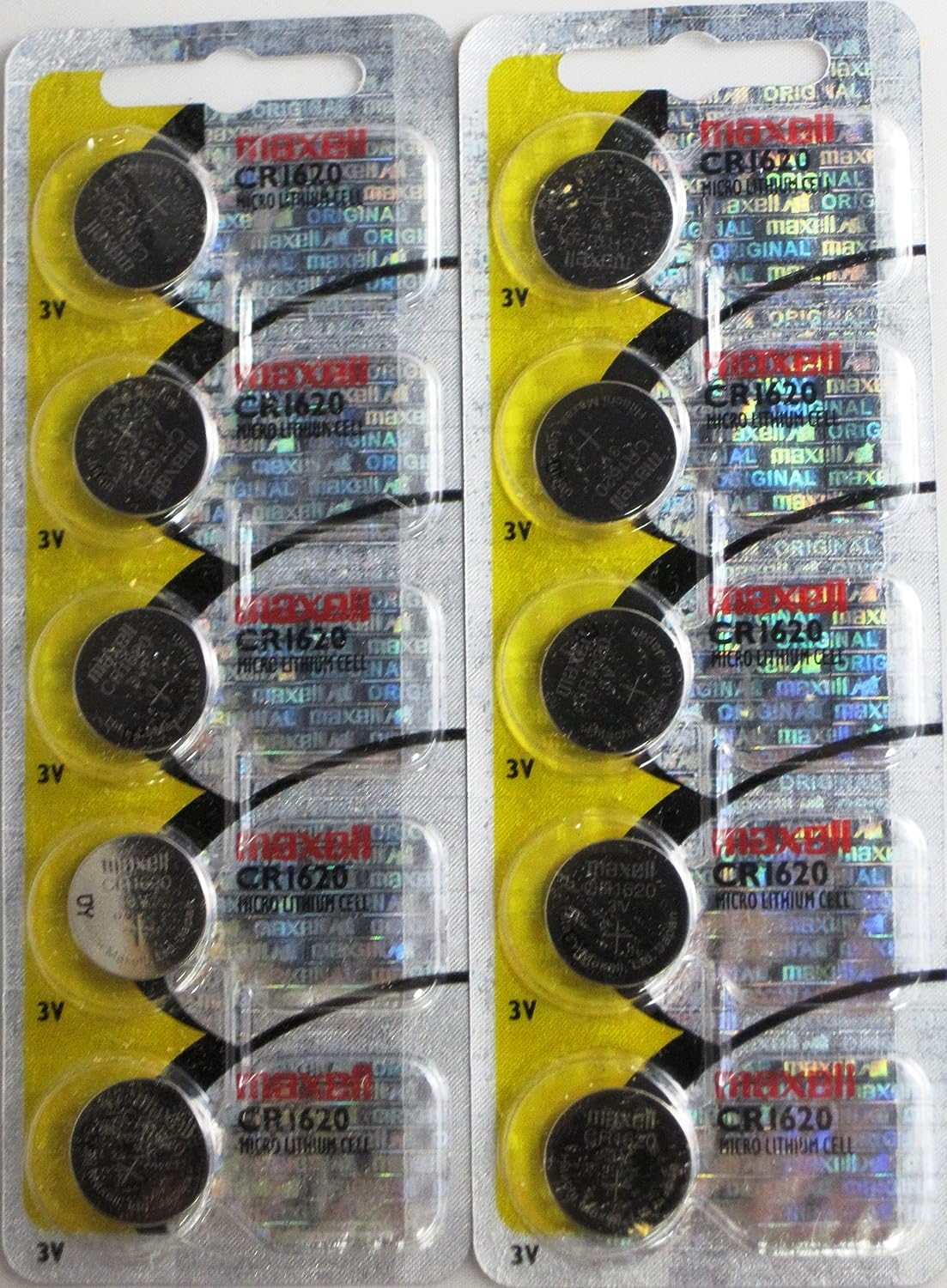 For *any* type of coin or button cell battery, look on Evilbay or Amazon. Store prices are outrageous! Just make sure of the battery number, find a deal & place your order. I've done this for years now, bought almost all mine from 3rd party sellers on Amazon, & kept watches, small travel alarms, mini flashlights, remotes for electronics & cars, all going strong for *cheap*.
B

Buy a sheet of 10 on ebay, I prefer someone who ships from the US and sony/maxell/name you heard of. They maybe cost 50 cents apiece.

Do you guys recycle your small button type batteries? I started some years ago when Home-Depot started to accept old batteries of just about any kind.

Originally Posted By: 123Saab
Do you guys recycle your small button type batteries? I started some years ago when Home-Depot started to accept old batteries of just about any kind.
Required by law in California. There are quite a few places that will take used batteries these days.
9

Originally Posted By: lugNutz
I go to HF for my remote batteries. A 4pk of cr2016's runs me 2.50 and I dont have to wait or pay for shipping.
I don't trust them or any button cells made in China. My dad bought some once and they leaked and ruined the piece of electronics where it was used. I trust Maxell, Panasonic, Sony (even those made in Indonesia), etc. If it's labeled as made in Japan, it's probably one of these manufacturers. Heck - I'll trust Renata before I'd use a Chinese-made battery. The main issue is the quality of the seals. I have seen Japanese-made coin-cells at a place called Daiso. Almost everything there is $1.50 and these came in 2-packs including CR2016/2025/2032. In Japan they're called 100-yen shops. This is what a leaking battery looks like:

I had a friend traveling to China who wanted a watch battery installed there because the labor was much cheaper. He knew I had a supply of Japanese-made button cells and asked for one to take there. They would normally either use cheap cells made in China or use imported batteries from Japan that cost a small fortune there.
W

mcmelectronics.com is usually cheaper than my local retailers, but sometimes big lots or ocean state job lot has them really cheap.
9

I only buy Sony or Panasonic button cells