Amazon updated the images for Pennzoil ultra 0w-20 SP GF-6A with a "carbon neutral" marketing line in green. The listing still states SN so not sure which version you'll obtain for 24.97 without S&S which bumps down to 21.xx 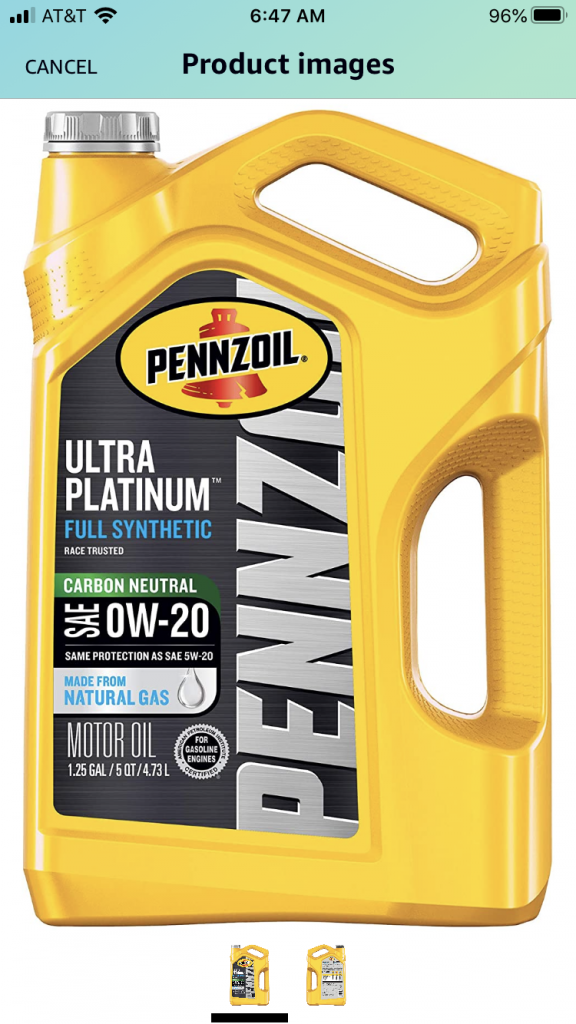 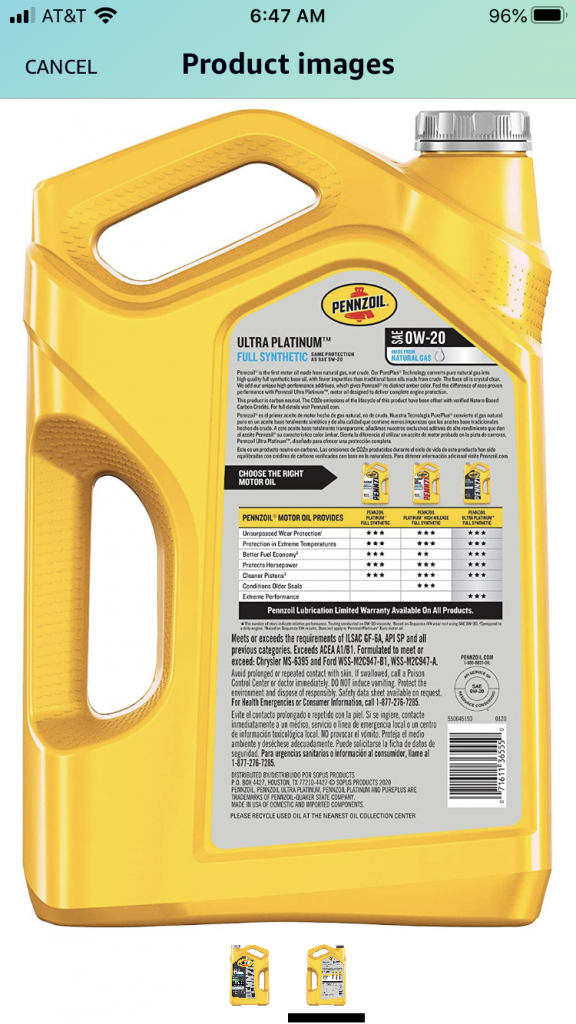 What does Carbon Neutral mean? Is there such a thing as non-harmful soot inside my engine - or inside my exhaust system? I demand Carbon Evaporation instead. Now where's this Race Pennzoil speaks of? Who races legally on our highways and city streets?
E

I wonder if "carbon neutral" pertains to the processing the oil from crude.
B

Originally Posted by Eddie
I wonder if "carbon neutral" pertains to the processing the oil from crude.
Yes, it does, but I wish it meant "infinite MPGs" when using it. Perpetual motion motor oil!
S

I have yet to see UP in a Walmart, O'Reilly, or other store. Is there some sort of shortage?
A

Originally Posted by AJB0009
"0W-20 - Same protection as SAE 5W-20" Hmm.
That's nothing new, ExxonMobil has stated something similar on their products for a long time. It is just an educational statement for a typical Walmart or Autozone shopper who might walk up and think an oil with a 0W winter rating is thinner or a "0 weight" oil.
M

I've never used PUP but it used to be available at Walmart a long time ago but then it stopped appearing on the shelves, today even PP is getting harder to find there, they did have 1 jug of PP HM 5w30 but that grade wasn't available in the regular version. I haven't been to Walmart in sometime because honestly I hate going there and when I do it's usually to purchase oil because no one can compete with their prices, the last time I checked the shelves there were a lot of empty spaces as they were in the process of rearranging that I've read on here. I don't know if it's just that PP 5w30 is so popular or if they just are not keeping it in stock but the price for PP had skyrocketed... and now I just look at their website and it has come back down again and the price is now in line with what it used to cost so go figure.
G

Great catch! The image shared was posted in error, but we do have exciting news on innovation from Pennzoil to share soon. As always, we appreciate the support from the BITOG community. Stay tuned.
S

Hopefully in the process it streamlines the product line! Look forward to hearing about it!
S

Originally Posted by GenaFishbeck
Great catch! The image shared was posted in error, but we do have exciting news on innovation from Pennzoil to share soon. As always, we appreciate the support from the BITOG community. Stay tuned.
When can we expect the info? I'm in the process of looking to find an oil, and just stick with it. Would be curious about this "new" innovation.
S

Per the back of the bottle, carbon neutral means Pennzoil is offsetting the carbon emissions related to the lifecycle of the product with "Nature Based Carbon Credits". Per Shell's website, "Nature-based solutions, or natural climate solutions, are projects which protect, transform or restore land. In this way, nature absorbs more CO2 emissions from the atmosphere." An example would be a forestry project / reforestation https://www.shell.com/energy-and-innovation/new-energies/nature-based-solutions.html
L

Maybe that jargon means the fuel savings from an engine running "SP" formulation 0W-20 offset the hydrocarbons used in the oil??
S

What I find interesting, is this oil is nowhere to be found. I went to another auto store today, and all there was is normal platinum.
G

Thank you everyone who has been eager to hear about our exciting news! The below list of Pennzoil motor oils are now carbon neutral and can easily be identified by their new ‘Carbon Neutral’ green ribbon on the bottle’s label: 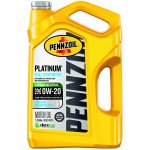 At Pennzoil, we want to help drive the future by reducing our carbon footprint and we are committed to providing lower-carbon alternatives. We will be implementing nature-based solutions, including activities related to the protection, creation or redevelopment, of natural ecosystems, such as forests, grasslands and wetlands, to help absorb greenhouse gases from the atmosphere.

Additional alternatives include avoiding emissions by optimizing the efficiency of our production process and product design. By designing products with reduced greenhouse gas (GHG) and less packaging (e.g. bigger, re-usable packaging, encouraging customers to buy bulk and transporting product using LNG trucks) we aim to keep products and materials in use for longer.

For more information on our carbon neutral efforts, please visit our website at https://www.pennzoil.com/en_us/carbon-neutral.html.
K

Earth is a carbon based planet. How can...Everything we manufacture is from Earth. IDK, confused!

I'm using Pennzoil Platinum High Mileage 10W30 SP. What's the difference between PPHM 0W20 and PPHM 10W30 (besides the obvious, viscosity) that makes the 0W20 carbon neutral and the 10W30 not carbon neutral? I'm confused too!! Are "0W" oils "carbon neutral" because they're "0W"?
S

The answer is Pennzoil has not chosen to make any grades other than those listed products and viscosities listed above (largely 0w's) carbon neutral. Making it carbon neutral has nothing to do with the oil's formulation etc.; not all 0w's are carbon neutral. All being carbon neutral means is Pennzoil engaged in some behavior (buying / building carbon offsets like planting trees) to offset any carbon emissions associated with the oil's production, and, potentially, engaging in other sustainable behavior (packaging, etc, but I think for economies of scale any packaging or other sustainable production practices would apply across their entire line. The the real difference in making an oil carbon neutral is buying / making carbon offsets). You could call a 10w30 carbon neutral if you bought enough carbon offsets equal to how much carbon emissions were associated with the lifecycle of producing, packaging and transporting the oil to the end user.

As an example, let's assume (totally made up figure) that producing 1 qt of PP 0w20 created 1 metric ton of carbon emissions to get the oil to the retail shelf (could be CO2, could be another carbon gas like methane). Making that 1 qt carbon neutral means Pennzoil has (for example) to plant enough trees that would absorb the equivalent of 1 metric ton of carbon emissions (removing them from the atmosphere and resulting in net neutral emissions). Pennzoil could plant the trees themselves, or there are people who engage in such carbon offset projects to sell carbon offset "credits" to companies like Pennzoil; the credit is a just a tradable record showing an amount of carbon offsets were created whose ownership can be transferred and credit applied to the owner

As to why they chose to only make some products carbon neutral, while not an expert, I assume most hybrids take a 0w viscosity and 0w is also being pushed as helping gas mileage which would appeal to someone green conscious, etc. As such, the buyer of oil who may most likely be swayed by the fact a product is carbon neutral would most likely be buying a 0w product vs another viscosity, so it may make sense to make those products carbon neutral and not others. But that's just speculation on my part
Last edited: Oct 24, 2020

Discussing oil is fine. Bashing brands, and politically charged accusation is not.
You must log in or register to reply here.

Best oil on the market?
2