Pictures for those who have been following

I dropped the power train this week and installed a new flywheel and pressure plate, bendix and starter nose. Then took it for a nice 20 mile drive. I put up a You tube video, but don't know how to embed it here. Here are a couple of shots from the beginning and a couple from yesterday. Much more on my site. Now it is a matter of carpeting and sound system.

Wonderful work with a classic.

http://www.youtube.com/watch?v=I5coi115XiI Is this it? I like all the pictures, but especially the second. It has a patina... surface rust and faded paint, yet relatively straight metal and most of the parts present. Would make what we affectionately call a "rat rod" if not restored further than that point.
V

Kudos for bringing it back to such good shape! My wife and I would like to do such a project once the kids are up and gone...or at least a little older.
C

Originally Posted By: pickled
Wonderful work with a classic.

Great job. I've done restorations also and the feeling of satisfaction and accomplishment is a great thing. I like it also that you are thumbing your nose to old Ralph Nader the POS!!

Good looking dog too in that 1st picture.

Thanks guys. No, that video was when I first started it, before changing out the flywheel. I should have thought about just posting the link. So this would be the first drive. It is quieter now too. http://www.youtube.com/watch?v=32gP0OF1MUk

What kind of vehicle for the filming?
W

Unfortunately the chase vehicle was my 4x4 Toyota HiLux. It probably would have been much smoother if it had had a half ton of something in it. Would have been better from my Grand Cherokee, although he would not have been able to pass and things.
J

Richard, great job. That brings back many memories. My father bought a new Corvair the first day they were introduced in my home town Chevy dealership. It was a Tasco Turquoise 4 door with 80 HP and 3 in the floor. a few weeks or so later, a Ford salesmanager called up and wanted to 'borrow it' for a day. Ford was introducing the new 1960 Falcon and wanted a Corvair for a side by side comparison at the local fairgrounds to train his salesmen. My father wisely said no. My friend's family later bought the 1962 Monza with the hot 102 hp engine and 4 speed manual. These engines had a throaty growl. Oh yes, I remember you could get an aftermarket dual exhaust for these cars.
W

Thanks to various people suggesting it, I searched for whitewalls and swapped out the blackwalls.

Widman, every time I visit the Henry Ford museum in Dearborn, MI (we have annual membership), I think of you! Here is their 1960 model: 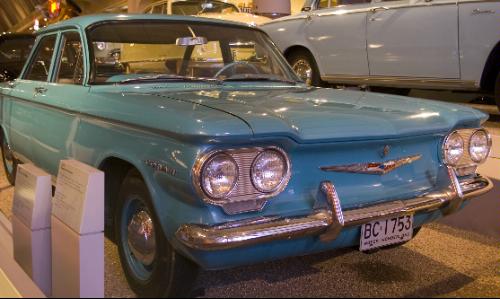 Every time I think of you, I think of my long time Bolivian friend, Hose', who introduced me to dining on GUINEA PIGS, a Bolivian treat, I am told.
You must log in or register to reply here.