This is my first UOA. I am pretty proud of the results of the test. 2006 Honda Ridgeline, one of the first made (MFG date 1/05), currently at 191,400 miles, with the oil sample taken at 190,000 miles after a 13,000 mile run. I have owned this vehicle since it had 8800 miles on it and have generally run an 8-10k mile oci, mostly staying around 8k miles. I have always used either Penn Plat or Mobil 1 5w20. This run was on Penn Platinum. I have in the past run both Wix and Supertech oil filters, but this run was on a Wix (Napa Gold) and have bought nothing but Wix (Napa Gold) lately and will not use SuperTech again. I have always run a Wix air filter. I will continue to do 10k mile OCIs, as this 13,000 mile run was done as an effort to get the oil change at a number of 10,000 increments to make it a little easier to remember. Thanks for looking and any comments. 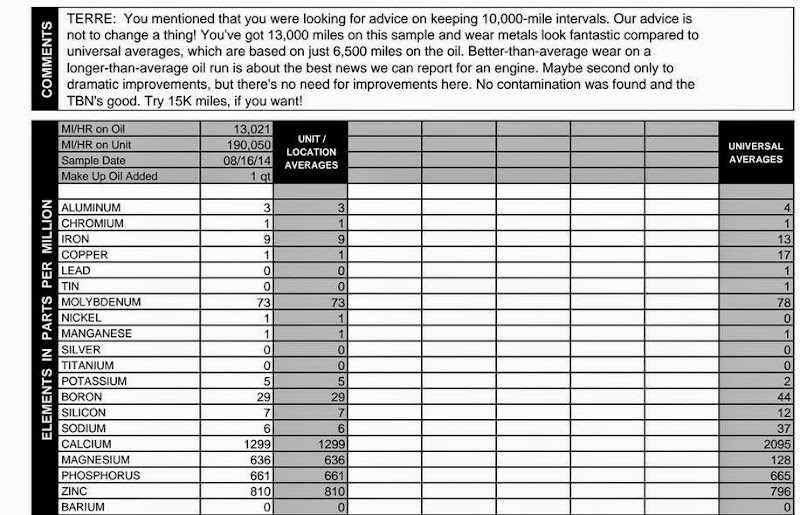 Low wear metals, good [email protected] degrees, excellent tbn-very impressive run. What kind of driving do you do and how much time was on this oil sample?
T

thooks, You have every reason to be proud. This is a fantastic UOA. Low Fe, fantastic TBN (3.9) & stable hot viscosity (~8.6cst) after 13K miles. However, are you absolutely positive this fill was PP 5W-20 and not M1 5W-20? The reason I ask is these results show the classic SN formulation for M1 of ~1300 ppm Ca, ~600 ppm Mg & ~70ppm Mo. SOPUS products, to include PP, use the older Ca only detergent-despersant package with ~2400 ppm Ca and only a trace (<10ppm) of Mg, with much less Mo (<20ppm). Even allowing for the previous fill being M1, Ca levels are much too low & Mg levels are much too high to be PP, IMHO. Just a thought. Either way the results are great. I wouldn't change anything (whatever that means in this case, lol). I would stay with PP, and resample after 15K miles, as you had plenty of TBN reserve, although it probably will be with the new PPPP oil as I haven't seen the old stuff in 5W-20 in awhile. Good job! Take care, Gary
I

I'm doing 15 000 mile OCI with both my Hyundai Sonatas 2.4l. It will be nice to compare my UOA reports with our UOA reports. Im just waiting to hear back about a oil sample just send out a few days ago. Pennzoil oil is awesome!
A

Honda and their engines, I personally haven't seen a bad UOA. Those wear numbers are insanely low for a 13k run.

Honda's J-series V-6, the one withOUT the cylinder deactivation, is a very nice engine that's generally very easy on oil. I, too, would like to know the OP's driving style. I change the oil in our MDX (identical powertrain to the OP's Ridgeline) every 3k miles due to 2 mile short trips by the wife to the kids' school. I'd be interested to know what the OP's doing here. Great job regardless.
W

Excellent report. Looks like M1 though, as mentioned above.
D

I'll just echo what Tucson Five-0 said. The report is fantastic! It does appear to be M1 though. Good job anyway!
T

Tuscon, You might be correct. It probably was Mobil 1. Who knows, I might take Blackstone's advice and run this fill of Penn Platinum (I'm positive on that one) to 15k miles and do another UOA. It would definitely be interesting plus if the wear numbers are similar, I would be even more confident in this engine living the life it needs to (Momma says I ain't getting a new truck anytime soon). Thanks for the comments. I have tried to take decent care of this vehicle since I bought it. I guess that has paid off. I wish Honda would build their suspensions like they do their engines. I just put the 2nd set of struts on the front. I guess if they have have 100k mile lifespan, that's not too bad. It sure makes for some expensive maintenance bills every 100k, tho. Hey, I grew up being taught that 100k miles "was a lot" and many were lucky to make it that far with a car (GM, Ford, Chrysler).
H

Originally Posted By: thooks
I just put the 2nd set of struts on the front. I guess if they have have 100k mile lifespan, that's not too bad.
It's not horrible. Our '05 MDX (same vehicle to yours) has OEM struts and shocks still, with 112k miles. I'd probably replace them, but my wife tells me not to touch it; she likes the ride. It's not yet floaty...but it's a little less controlled than I think it could be. I'd say that 100k miles isn't bad service from a strut or a shock. I'm sure that others go longer...and some are toast after 60-70k miles, too.
B

thooks, Seeing that you agree & believe it's really M1, I would keep using M1. We don't see as many M1 5W-20 UOAs with newer vehicles specifying 0W-20, and owners using the M1 0W-20AFE, but the SN version of M1 5W-20 is an incredibly robust, durable oil that gives fantastic results. Keep it in there & move up to 15K miles! /edit---Just reread your last post, I see you really have PP (probably the latest Natural Gas version) in the Ridgeline now. It will be interesting to see how it does compared to M1, as there's not much room for improvement. I'm not sure I would run this fill to 15K though, with the major additive chemistry change. I would at least sample it at 13K and go from there. Gary
T

I forgot about the driving habits/etc.- I live about 18 miles from the office. The first 6 miles of that in the morning can be stop-n-go, red light to red light or sit and wonder what / how many morons are driving that particular morning. Then there's about 10 miles of WAO, 60-80 mph 'freeway' (if such a thing exists around Atlanta), then a couple miles of 30-50 mph to the final destination. In the evenings, it's a mile or so of 3-9 mph, then WAO for a couple miles, then roaming through mostly residential thoroughfares at 30-45 mph for 5-8 miles, then sitting still in stop-n-go for 2-3 miles, then roaming again at 40-50 mph for 3-4 miles, then some stop-n-go for another 4 miles. Mixed in with 'driving to work', there might be a few days a month on long day trips, or trips of 100+ miles or more where I'm running at least 50 of that in the interstate. I drive it hard at times. I'm not afraid to make that engine work like a dog. I don't see how slow I can go from red light to red light. That's not saying I run like an idiot everywhere, but I will get out of the slow-pokes way and let them ride door-to-door and bumper-to-bumper in all these multi-lane roads....allowing them to pass the Grey Poop-on from car to car with their cheese and crackers. I topped off with a quart of Penn Platinum at 10,000 miles. As far as time on this oil change, I changed the oil on April 19, 2014 and dropped it on August 16, 2014. So basically 4 months. There's some insight in my driving. As far as the struts, yeah, a 100k miles isn't bad, considering the horrible roads driven on. It doesn't take a genius to see that most roads in the big cities are nothing but potholes, filled potholes or future potholes. Combine that with 87,000 patches where the metal plates once were and you're wearing those struts out. Hokie, I would be diligent in checking tire wear. A set of worn OE Struts on my wife's CR-V caused us to throw away a set of tires 1/2 way through their life because I ignored the struts. $1900 later (tires, 4 struts and CV axles) and that sucker rides like new. At 82,000 miles.
T

No, the Penn Plat that is in there now is 0W20 and not "made from natural gas". I do KNOW that for sure. I bought the 5-quart jug at a WM I happened to be in a few months ago, knowing I'd need it sooner or later. I appreciate the advice to keep using/get back to Mobil 1. I will jot all them numbers and letters down and look for some M1 matching that soon.
B

Originally Posted By: BIGJ552000
Any top offs?
Looks like a Quart's worth. That will most certainly boost the TBN.
J

I wonder how much the vehicle manufacturer should be credited?? Meaning, I use PP as well. I wonder if my Ford would show the same as your Honda product... Joe D.
G

Looks good! I am glad I am running Mobil 1. It really is the best bang for the buck you can buy in terms of synthetic oil. I am running the 5W30 though which from what I have seen is their most robust formula. Let's see how the older Pennzoil formula does on the UOA.
Last edited: Oct 22, 2014