There is actually an over abundance of fissile material worldwide. The mining of Uranium for yellow cake has been a break even prospect at best for the last decade. The dismantling of warheads and the dilution of that high yield material for reactor fuel has stymied the market and will continue for the foreseeable future. Maybe the small reactors will increase the need of a less volatile fissile material as some articles have expressed.

OPG has a relicensing hearing now for the new SMR build at Darlington B: OPG’s application for the renewal of a key licence for its Darlington New Nuclear Project will be considered in a public hearing this year.
www.opg.com

OPG’s application for the renewal of a key licence to develop a new nuclear project at its Darlington site in Clarington is set to be considered in a public hearing later this year.

OPG’s application will be considered by the CNSC at a public hearing on June 9 and 10, 2021. To learn more about the hearing process and how to participate, click here.

On Nov. 13, 2020, OPG announced the resumption of planning activities for a new nuclear build at Darlington with the goal of hosting a grid-size Small Modular Reactor (SMRs) by as early as 2028, pending regulatory approvals.

“A new SMR development on our Darlington site would benefit all Ontarians while further positioning Durham Region and Ontario as the clean energy capital of the world,” said Ken Hartwick, OPG’s President and CEO.

The Darlington station is already an important part of Ontario’s clean energy future, providing close to 20 per cent of Ontario’s electricity, and the Darlington Refurbishment Project will ensure the facility continues to provide clean power for decades to come.

The company’s new Climate Change Plan highlights SMRs and other clean energy solutions as critical to helping the company and the markets where it operates achieve net-zero carbon status in the future.

To construct and operate a new nuclear reactor at Darlington, further approvals, including additional CNSC licences, will be required. These licences must be obtained through an extensive regulatory process, which would include the opportunity for public input and a public hearing.

The site preparation licence is one step in the approvals process, which also includes a construction licence and an operating licence.

The Darlington site is currently Canada’s only site that holds a site preparation licence for future new nuclear development, with a completed and accepted Environmental Assessment (EA), which was granted following extensive public engagement and a 17-day public hearing held in Clarington.

To learn more about the DNNP and licence renewal application, visit www.opg.com/newnuclear.
Click to expand...

From what I've heard, the site is initially planned to consist of two different brands of SMR:

OPG is also actively funding USNC/GFP's MMR design (the "shipping container" reactor) but it is being constructed at Chalk River, which is already able to host SMR's.
C

Probably one of the many reasons new nuclear is so expensive. The expertise and skills learned during the cold war have all either retired or passed on.

Typical for all industries with not much growth and not much money to be made, declining, resting and vesting, etc.

The average age of people in the hard drive industry these days got to be 60 by now. We couldn't keep young people in it in the last 20 years, because income hasn't kept up in the last 15 or so.

I just saw this news article and figured it would be worth sharing.

A new 320 megawatt nuclear power plant near Richland Washington to be built. It is a advanced design. 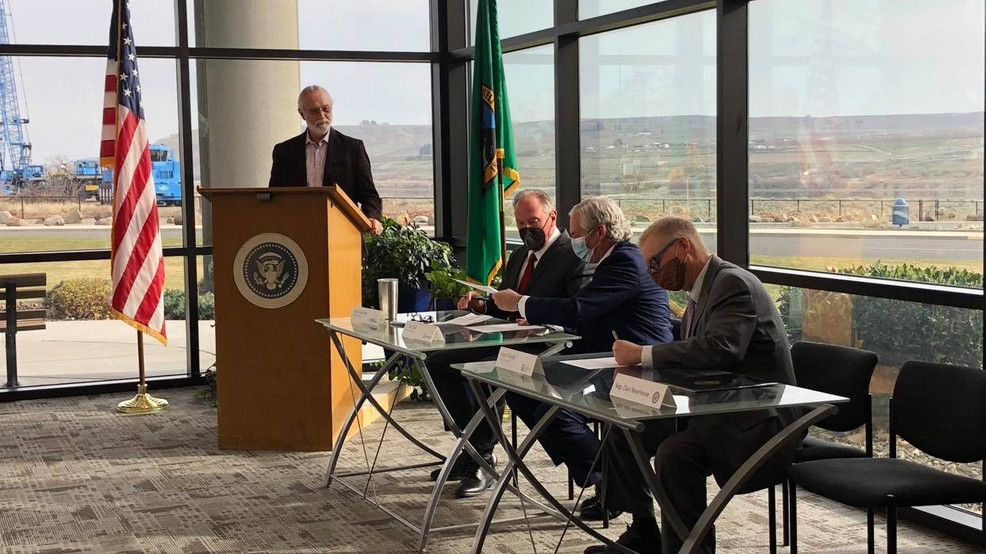 ctechbob said:
Probably one of the many reasons new nuclear is so expensive. The expertise and skills learned during the cold war have all either retired or passed on.
Click to expand...

The AP-1000’s in Georgia will go online barring some unforeseen mishap. America has seemed to favor the NuScale SMR. SMR’s I believe will be the plants of the future. After Vogtle 3&4 America is probably done with big plants for the foreseeable future. With Dems in office, nuclear power in general may be dead in America.

Dems are focused on the “green” energy farce.

China will be building many AP-1000’s. Westinghouse was smart with the contract for China. They sold the rights to China after the first few plants were built by Westinghouse. They knew the Chinese would steal/copy the plants anyway. China already has the manufacturing base to build all the large components.

The Middle East could still build some more. They work with the Korean design that came out of the Combustion Engineering design. It is basically an updated CE plant.

Snagglefoot said:
SMR’s are certainly the way to go. The darn thing about full size reactors is that they always seem to go wildly over budget . Why not standardize them and bring sanity to the price. Thanks for the post.
Click to expand...

That was actually the plan for the AP-1000. Standardized plants. They are great plants, but just too large and costly to build for Utilities in the US. The Government would have to help with financing such large sums. Our government is broke and not interested in this type of infrastructure.

This is true. The Canadian government is sponsoring the SMR thing here.

The Chinese seem to be focusing mostly the Hualong One design now, being their own design (based heavily on the EPR) but I do expect them to continue to build more AP-1000's, as they have a good track record so far and they are even using two for district heating at this point.

The cost of course would come down if the US were to build more of them, that's the whole idea of the cookie cutter design. The first ones are always the most expensive. But if the dems kill the nuke program, any chance of capitalizing on the momentum of the two units at Vogtle is of course lost.

Cost being one, the financial risk of any large project would be another. If utility rate is not stable there could be a chance that a new plant can go under due to debt default.

I can see a future where large power plant would need to find long term large rate payer to sign contract before breaking ground. At the moment I see data center signing long term contract and build next to plants like solar farm, hydro, or even gas plant and then buying / swapping power credit to make them "green".

There is a power plant along Central Express Way, and almost all the industrial site near by are unmarked data centers. It would be hard for nuke plant to find large clients to sign long term contracts these days.
You must log in or register to reply here.