Haven't had one of these in a while, as there hadn't been any noteworthy developments up until now.

As part of the refurbishment of the units at Bruce, in order for them to operate through 2064+, they need all the steam generators (boilers) replaced. Interestingly, Darlington, which is the newest in our fleet, is not having its SG's replaced during its refurbishment, which is the one of the reasons its operating life is slated to end in 2055 (though that may be extended).

When Pickering B was planned on being refurbished, OPG had SG replacement as part of the EA (which was approved by the CNSC) and this had an operating life forecast of "into the 2060's" per the CNSC approval paper. So, it seems boiler replacement is critical for a lifespan beyond ~60 years (Bruce will be well into its 80's).

Anyways, back to the update! This picture was posted and shared with me by one of the members of our nuclear advocacy group: That's the first SG being removed from Bruce Unit 6, which is the unit currently being refurbished. All of its pressure tubes have been removed already, but this (boiler replacement) was a big, and extremely important task, so it being underway is a big deal. The new SG's arrived quite a while ago and I believe I posted pictures on one of the previous threads. They have all of them, for all the units, onsite, ready to go. They were produced by BWXT Canada.

Bruce has 8 SG's per unit, and, as I've noted in previous threads, these units have the highest thermal capacity of any in our fleet at 2,832MWth. Pickering has 12 SG's per unit, which are smaller. We, as an organization, had an interaction with an individual who scoffed at the idea that SG replacement was possible at Pickering. I assumed this was only due to a lack of knowledge on the fact that:

On #1, when Bruce units 1 and 2 were refurbished back in the early 2000's, SG replacement was part of that process. One of the boilers had been damaged by a contractor leaving a lead blanket on it, which melted and caused significant damage.

A friend of mine who worked for AECL provided these pictures of the SG's removed from Units 1 and 2, which are currently stored at the WWMF (Western Waste Management Facility) located on the Bruce grounds: The remarks about their storage condition are germane to a discussion he has going about the future for items like these that are in need of being decontaminated, as 95% of the steel can be recycled. This is an industry, not materials issue, trying to get something approved to process this seems to be perpetually stalled. This will become a MUCH larger problem quite shortly as this stockpile will grow from 16 to 64!

When Unit 6 returns to service, I'll be keen to see if they run it up past ~825MW, which is about what they seem to be able to get out of the B units on a 5% derate. It went down with 880MW painted on the side of it, so expectations are high that she'll be back at 100% with the 95% FP limit removed by way of the use of the new fuel bundles and new, updated SG's in place. There have also been some tweaks on the generator side. The removal of the limit will depend on what the CNSC thinks.

Also, keen eyes might note that the SG coming out of 6 looks quite a bit different from the SG's from Unit 1 and 2

The Bruce A units have a different SG arrangement than the Bruce B units. The A units have a "drum" style setup, as the plant was designed to produce vast amounts of process steam to run other things on the site, such as the massive heavy water plant.

For the sake of keeping the pics in one thread, here are a few pics from the Bruce FB page that show what the new B-unit SG's look like: So, Bruce Power finally posted some official pictures of this event, so I'll share them here: I don't know much about commercial plants other than the basics we learned in college, but I find the use of vertical SG's interesting. I always thought they were horizontal u-tube-type. Any cross-section of the insides you can share?

I don't know much about commercial plants other than the basics we learned in college, but I find the use of vertical SG's interesting. I always thought they were horizontal u-tube-type. Any cross-section of the insides you can share?
Click to expand...

Sure, I have some pics at the house, I'll post them up when I get home

I don't know much about commercial plants other than the basics we learned in college, but I find the use of vertical SG's interesting. I always thought they were horizontal u-tube-type. Any cross-section of the insides you can share?
Click to expand...

OK, here are four CANDU designs, first up is Pickering: Third is the CANDU 9 (Darlington houses the only four of these in existence, the units at Bruce were the development reactors for C9): And the fourth is the CANDU 950, a design that never left paper, but the picture gives a better cutaway view than the CANDU 9 one to show you the SG arrangement: That's the same arrangement as at Bruce (8x SG's per unit). Darlington has fewer, larger SG's.

Bringing this thread back to life! 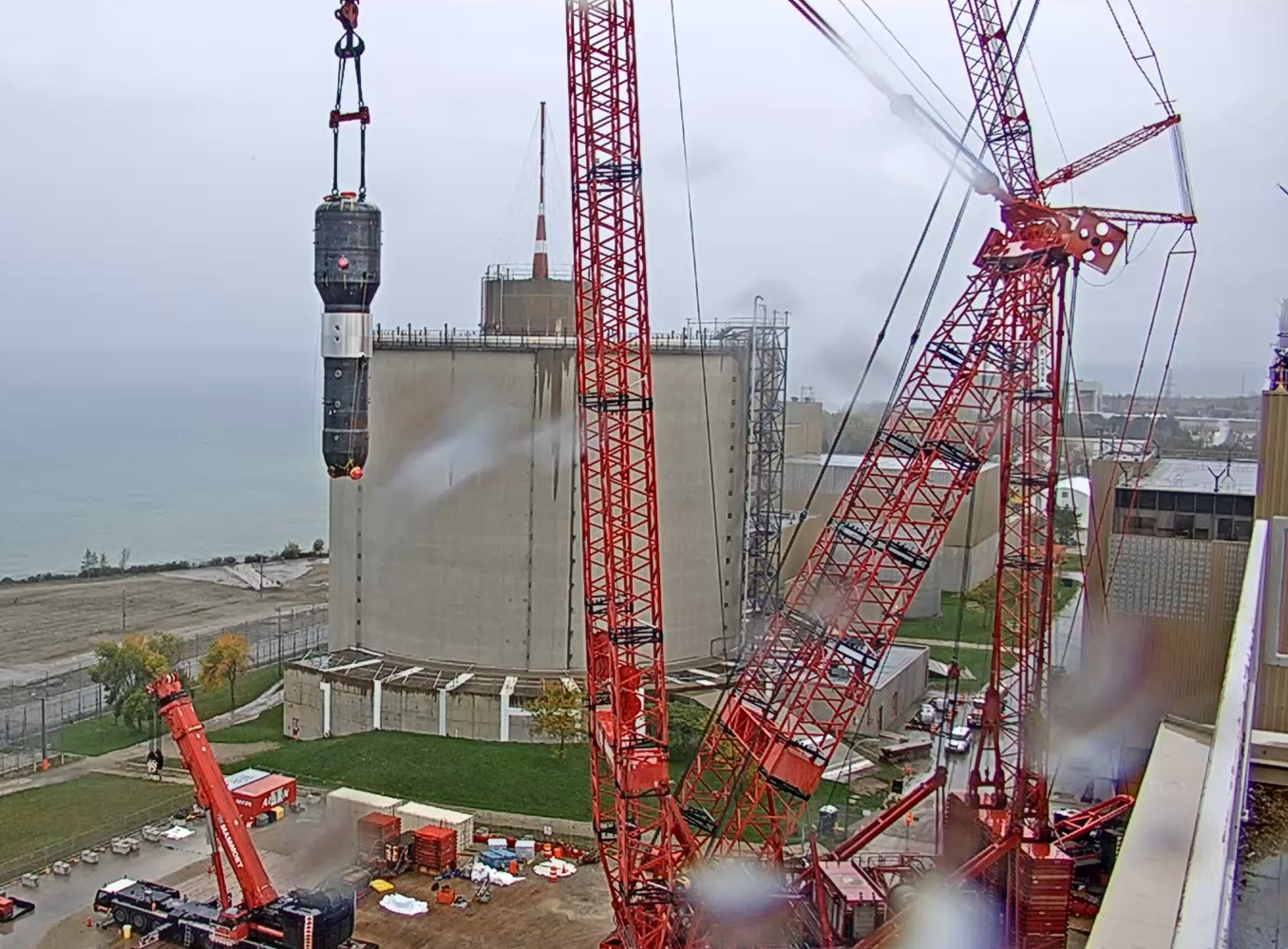 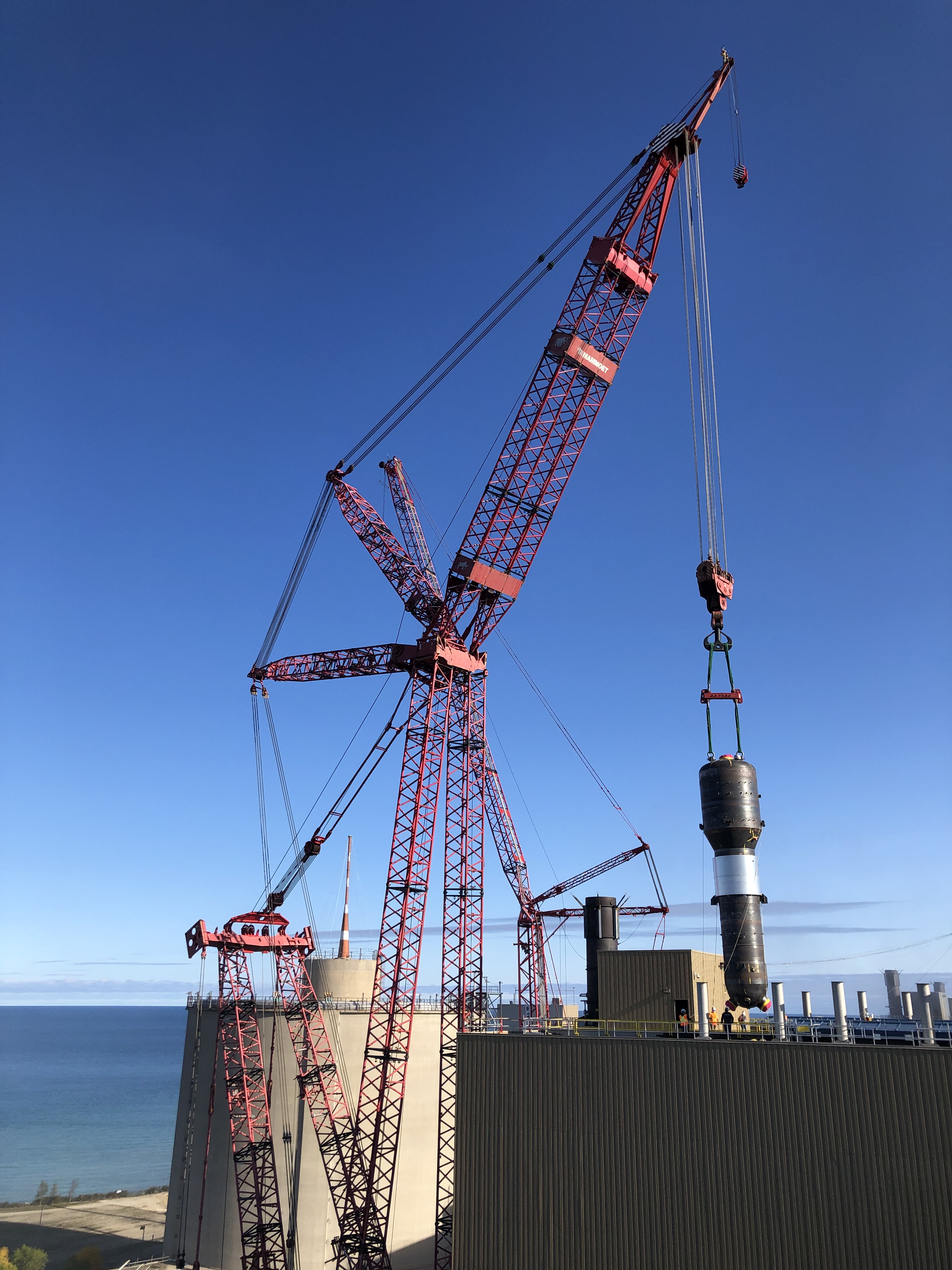 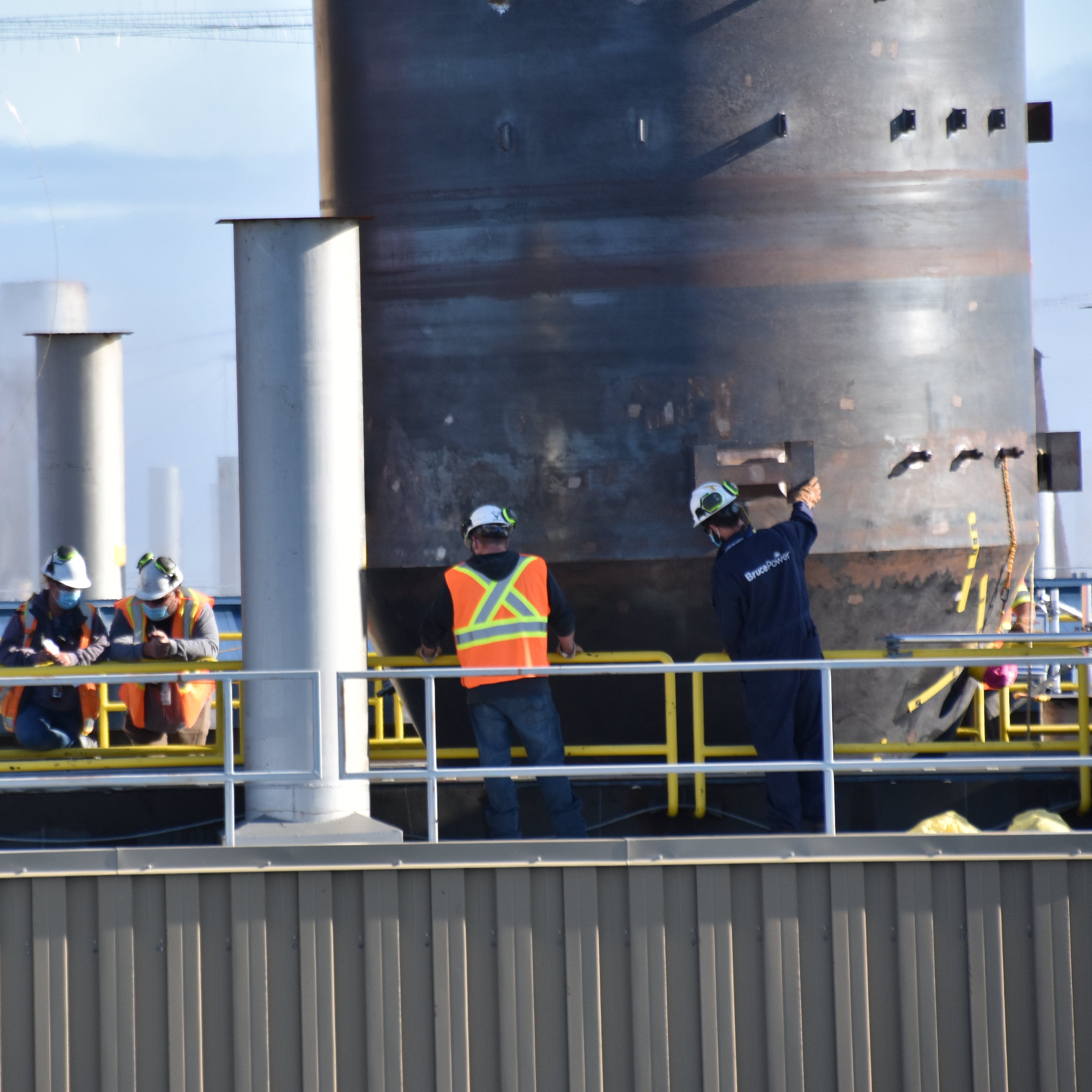 Two more to go on this side, then it gets sealed back up (containment repaired) and the other side opened to extract and replace the 4x there.

Of course other parts of the MCR project are ongoing within the reactor vault itself at this time.
You must log in or register to reply here.