Is this Lubro Moly oil OK to use in my Toyota?

I have a 1994 Toyota Pickup v6 (3vze engine) with 156,000 that I bought from the original owner @ 145,000. He said that he used Lubro Moly 5w-40 oil in for the past 6 years. I did a little research on this but have no found enough info to be satisfied. Obviously, logic tells me that if he used it for 6 years and had no problems, it should be fine... Anyway, here is a pic of an oil jug he sent me when I asked what it was (because I had never heard of it before): 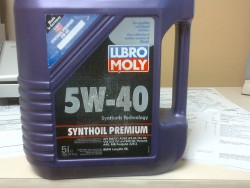 I have done 4 oil changes with Castrol GTX conventional - when I first took ownership of the truck I brought it to my local Toyota/Lexus mechanic to have a check-up done, along with oil and filter change, and this Castrol is what they usually use. I never mentioned the synthetic to them because I figured it wouldn't be a big deal. But the more I thought about it, the more I would prefer to go back to synthetic, as I plan on keeping the truck for a long time. I figured that it would be OK, and in anticipation of that I went to NAPA today and bought some more for my next oil change. The 5L and 1L options came in different packaging, but I think they are the same...can anyone confirm or deny? Here is a pic of the oil I bought: 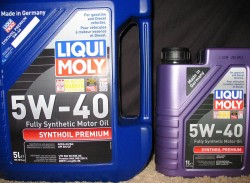 You usually can get it at NAPA. You would have to look at the back of the bottles to know what specifications it meets. I think using API SJ or above is all that engine really needs.
W

I have been running the same oil in my wife's MB now for about 3 years......I really like it better than Mobil 1 for this application.....the best deals I have found is on Amazon, cheaper than Napa.......if previous owner ran it for that many years and that many miles, why change? It is a bit pricey, but good oil.....same oil, just changed color in packaging blue being the new packaging............
Last edited: Feb 20, 2014

Liqui Moly/Lubro Moly is good oil, use it with confidence. It's a shame you can't get the Synthoil High Tech 5W-40 in the States any more, that's a PAO based oil.

Originally Posted By: KtrainHurricane
I have a 1994 Toyota Pickup v6 (3vze engine) with 156,000 that I bought from the original owner @ 145,000.
Does the owner manual for this vehicle actually call for Xw-40 grade oil?
B

Originally Posted By: Quattro Pete
Does the owner manual for this vehicle actually call for Xw-40 grade oil?
I can't see the grade being much of an issue. I also can't see a relatively expensive (in North America) synthetic being very cost effective, though. I bet GC, M1 0w-40, and similar are much cheaper and easier to get, if someone is really set upon using an A3/B3 A3/B4 type oil.
K

Originally Posted By: artificialist
You usually can get it at NAPA. You would have to look at the back of the bottles to know what specifications it meets. I think using API SJ or above is all that engine really needs.
Yes, I got these two at NAPA...
K

Originally Posted By: Quattro Pete
Originally Posted By: KtrainHurricane
I have a 1994 Toyota Pickup v6 (3vze engine) with 156,000 that I bought from the original owner @ 145,000.
Does the owner manual for this vehicle actually call for Xw-40 grade oil?
No. The owner's manual says 10w30. I was/am having some trouble burning oil, so my mechanic told me to use a thicker oil. Like I said earlier I did not mention to them that the previous owner had used this 5w40, as I just had them do oil changes with their conventional Castrol GTX 10w30. After suggesting I go with a thicker viscosity, I added in 10w40 Castrol when I noticed the dipstick getting low, and then had my last oil change done with 20w50 Castrol. Not sure if any of that info is important, but again I just wanted to confirm that this oil is OK with my Toyota Pickup 3.0

Originally Posted By: KtrainHurricane
and then had my last oil change done with 20w50 Castrol.
How is the 20W50 working out?
K

Originally Posted By: aquariuscsm
Originally Posted By: KtrainHurricane
and then had my last oil change done with 20w50 Castrol.
How is the 20W50 working out?
In all honesty what the [censored] do I know?... Haha I am the first person to admit that I have NOWHERE near enough knowledge or experience with vehicles/different oils to say there is ANY difference, but I will say that I seemed to have noticed a slight MPG decrease, and the truck doesn't *SEEM* to run as smoothly...almost like it is working too hard. I know that this would be the "typical" thing that too thick of an oil can do, but it may or may not be me actually noticing it as opposed to having a placebo effect with it. I don't know. With that said, though, I was low about 3/4 of a quart last time I checked (about 1500 miles since last change) and I added in 5w30 Castrol to lower the viscosity...and again, it *SEEMS* to run a little "smoother" now.
K

So is the consensus that this Lubro Moly IS "safe" to use? If so, is it worth using, knowing that I burn oil and will replace a quart every 1,000 miles or less...?

It's safe to use, but probably a waste of money considering the consumption.
S

German stuff is usually pretty good. Lubro Moly is the oil of choice for many non-factory BMW service shops. I'd use it if the truck likes it. That looks like one of their fully synthetic oils.
You must log in or register to reply here.