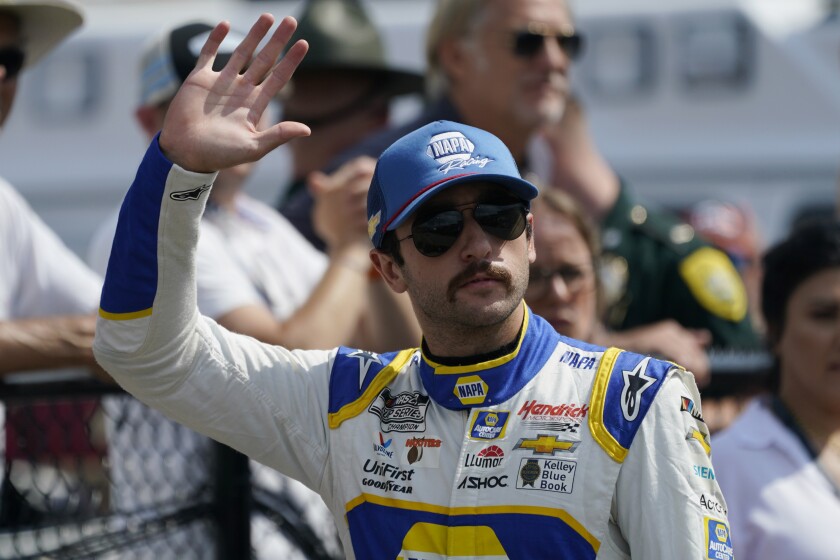 I would think JGR would have to appeal this one that's some BS.

It takes major offenses to get disqualified. Wow!

I guess has to do with material on front fascia board was there pre race inspection.

Couldn’t have happened to two of the most deserving guys out there (sarcasm). I’m led to believe that one of the two crew chiefs were made aware of the issues pre-race. If that’s true, somebody ought to be penalized individually by JGR.

If the cars passed the pre-race inspection then this is on NASCAR. Can’t say “you’re good to go” and let them race and then say, “oh sorry we missed this.”

On related news, I thought Denny's daughter breaking down and crying when she heard her father getting boo'd was spectacularly heartwarming. And then seeing her climb into his race car. Priceless!

Finally NASCAR has started cracking down on this stuff. It has been this way for a long time at the local tracks. I remember back when I was a big NASCAR fan I was so frustrated when Chad and Jimmy would get caught cheating and the penalties were mostly monetary and really had little to no impact on the championship. When you get caught cheating you should be moved to last in the running order, no exceptions.

Why wouldn't Bell's Toyota be the same?? I enjoyed that race more than most because drivers could pass each other and fuel strategy came into play.
L

Something is going on here. Joe Gibbs is not a cheater and wouldn't hire cheaters.

Oliveoil2 said:
If the cars passed the pre-race inspection then this is on NASCAR. Can’t say “you’re good to go” and let them race and then say, “oh sorry we missed this.”
Click to expand...

As part of the post race inspection, the wrap is pulled back to verify panels are unmodified. They can't do this pre-race because A. it would damage the wrap, and B. it would take FOREVER to do on every car. This was part of the normal top 5 post race tear down.

They could face a much higher penalty, an L3, because it was a modified single source part. The body panels are supplied by Five Star and cannot be modified in any way. That is why the cars can no longer be painted and can only be wrapped.

I am honestly curious if the other 2 Gibbs cars and the 2 23XI cars had the same issue, but were not torn down since they were not part of the post-race inspection. Gibbs could argue the components were supplied that way, but that would have to be part of their appeal, if they choose to file one. I am also curious if this was done at Gibbs after the parts were received from Five Star, how far up the chain of command was there knowledge?

loneryder said:
Something is going on here. Joe Gibbs is not a cheater and wouldn't hire cheaters.
Click to expand...

Yeah, just like the magnet under the gas pedal back when they would put a car on a chassis dyno at the track after the race to test engine power.
J

Only a fool would try to cheat with every car. If caught, would be very hard to argue that it wasn't intentional.
1

So them two cars qualified 1&2 and the 11 car by a far margin and after qualifying and pre race inspection they weren't looking extra hard and don't find anything come on i don't i believe it.

I dont know how this happens. I'd like to say its part of the "if you arent cheating you arent trying" mentality.. but I think that has faded to some extent recently.
Be interesting to hear more inside info about this.
S

Are Bo and Hope still together?

Nothing in the world of competitive racing is done by mistake!
You must log in or register to reply here.

Buffalo Bills Player Collapses on Field After Play, Given CPR and O2
2