So i'm giving away a 1987 Dodge Caravan. You'll need a trailer and possibly a winch to get it up onto the trailer. If there's more than one person seriously interested i'd consider offers above zero to hold it for you, I mean i'm half inclined to cut out the catalytic and pull off the tires which are likely sellable - I could do that and have it hauled away still slightly money ahead - but i'd prefer the vehicle to go to someone who intends to repair and drive it again because it's NOT a derelict. It was garaged more than half of it's life, one owner car, no accidents, no major (ie powertrain) problems, the body is surprisingly nice for a 34 year old minivan in Minnesota, the 141k miles is not excessive (i'm sure if minor things were fixed it would go another 60k) and the 4 cylinder knocked down 20mpg city just like the new minivans. (though hwy mpg is only 20)

The downside - it just has multiple smaller things I no longer have the time, energy, motivation, or will to fix. I spent over $1000 (for parts, tabs, sitting insurance) since the right rear drum piston seized to hold onto it or for repair parts that never made it into there with the intent on fixing it to run again afterall, and i'd spent another $1000 in the year before on replacement carburetor and tires for it, I mean the rest of the van I thought was worth holding onto trying to fix so I hate to see it go - but the simple fact is I already have three other cars now needing fixing, i'm going to have to move from my home soon prob before spring thaw, and this is the vehicle I have the least demand for. Also I want to handle this before things get snowed in making it harder. Someone willing to fix brakes, fuel pump, and a few other minor things (like a window crank fell off, the speakers crackle badly, the AC is out of charge) could have a nice van for awhile. The body is too nice to just junk IMHO.

I'll shut up and share some pictures. If youre interested contact me and tell me your interest, again I was hoping to give it to a fixer not a scrapper or i'm tempted to cut the cat out and scrap it myself. Also possibly of interest is it has the I think it's somewhat rare folding rear bed - instead of a 7 passenger it's a 5 passenger and the rear seat folds down to make a sleeping surface that would be great for someone car camping or similar, that was actually one of the reasons I kept it. The seat is temporarily out of the vehicle in the pictures (as I was hauling stuff in the rear before the drum seized) but will go with the van - or I could even sell it separately if someone wanted just that since that's the nicest seat in the interior. 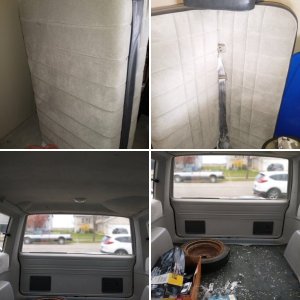 bobistheoilguy.com
ONE OWNER schoolteacher driven garaged most of life but not currently running and possibly marginally rollable (I haven't checked but a winch instead of one guy pushing might be safer, I haven't tried to roll it and wasn't going to try until someone is here with a trailer just in case it didn't want to roll back forward uphill nicely in the driveway again)
141k miles
Tires are mostly unworn (but are older/I dont see weatherchecking yet but they wont last forever)
No battery now
Body very good for an MN/mostly garaged, window glass really nice
Interior some dirt and problems tho under the plastic front cover its pretty nice for instance, the fold-a-bed rear seat is nicer and less worn
2.6L Mitsubishi 4cyl, 3 speed automatic
Will include some parts that were in progress for the rear brakes, perhaps a repair manual, I should still have the title, I might even have service records somewhere
I think I have a new radiator for it - that probably gets sold separately though. It didn't need it at the time, my dad just bought one off a mechanic friend cuz someone had the part for sale and it was brand new unused stockpiled but I have no other use for it so was deciding what to do with the part.

Known problems
- the right rear brake seized which forced me to not use it for like 5 years or i'd have never stopped
- sometime during that period I think the fuel pump died, it was starting and running fine (the carbs on the 2.6L are normally a bit trouble prone, but I had mine replaced with a good running one - the old carb which would need rebuilding can be included as I have no use for it)
- a minor fuel leak in the rubber hose near the fuel tank started dripping and let gas out this year, one of the final straws that made me decide to stop trying to fix it. It's mostly empty and I don't really want to play the game of fill it up with gas and try to start it - but it was running fine before what I assume was fuel pump failure maybe two years back when I finally had a chance to start working on (but didnt finish) the brakes (as I realized it wouldn't be instantly running after the brakes were fixed and went to a different vehicle), i'd been keeping Pri-G in there and topped off new gas for startups twice a year previously.
- there was a minor transmission fluid leak, that's gone on for years but it never had a problem just topping up the fluid and driving it for the 30,000 miles that I drove it after inheriting it. I'm sure most of the fluid leaked out by now since I stopped topping it up as I wasn't driving it for multiple years.

Hell i'd half consider giving it to someone to buy it back in the future if it was fixed and I got rid of some other cars because I know it's history and it was a good little van, just no highway power, no overdrive and other minor quirks. But I have nowhere to park/I have too darn many cars needing fixing or inherited and am tired of throwing money at it trying to hold onto everything.
L

Why not donate it to a charity or a local vocational school? You might be able to buy it back after vocational students learn from it and get it roadworthy again. Body looks decent too.

Get a school program to fix it up for you with the caveat that once done, you will give it to a needy family. There are some people that could surely use a running minivan but are not able to afford basic transportation.
C

Lubener said:
Why not donate it to a charity or a local vocational school? You might be able to buy it back after vocational students learn from it and get it roadworthy again. Body looks decent too.
Click to expand...

I wasn't sure if they'd have the ability to trailer it out of here but i'll consider that if there's no other takers.
L

columnshift said:
I wasn't sure if they'd have the ability to trailer it out of here but i'll consider that if there's no other takers.
Click to expand...

I am sure they have run into that situation before and have the means or towing company to get it off your property.

Also if this is still up it's still available, my only real goal was getting ahead of heavier snow but just in case there's any interested parties i'll try to wait thru next week. : P

Dang wish I was closer I would be the taker. I have always wanted one of these.
L

Don't give it to the guy with the wood chipper.

Lubener said:
Don't give it to the guy with the wood chipper.
Click to expand...

Hopefully the timing chain(s) are still good in it! One of my best friends growing up (family) had one of these, believe it was an ‘86 2.6 Mitsubishi, I remember the engine having to come out to do the chains, guides, & sprockets. Was pretty noisy before they fixed it, and it survived a long time after the repair. Same color, wheelbase, and rust spots!
C

AFAIK the timing chain is/was fine, the only problem it had originally was the carburetor flaking out which i'm told was common - that got replaced shortly before it's long park and was running happily which is another reason I wanted to hold onto it.

Unfortunately it's looking like it's heading towards a dump cuz I can't find anyone else interested in it. I got one local response to check it out and all they did was mangle up the side door and track which now doesn't even go back on properly or close, with no other response and now with a mangled door it's value is probably nothing since the track looks like it's a part of the bodywork and now it's messed up. (and I already wasn't going to mess with it any more just to get rid of it) I'll leave it up a last few days just in case but it's fate is probably sealed. : P
You must log in or register to reply here.

Whatever happened to hi-rise bikes?
2 3