F20C Honda S2000 results. What should be my next oil change?

Hello there. New member, 1st post. Just want to get opinions on my recent oil results. I know I should get another resample so the data can be accurately adjusted, but I'd like to get your opinion anyways on the current condition of the F20C engine w/ 142k mi, and suggestions with what should be used on my next oil change. Sample below was withe Motul 300V 5W-40. Had 2 track days with this oil, but other than the track days I hardly ever engage in vtec, drive the car like a summaritan, just cruise on the weekend type of car. Changed the oil at 2,297 mi with Penzoil Platinum full synthetic 10w-30, and OEM filter. I don't think I will be doing any track days with this oil, but will change before event if doing so. So what should be next, and also may be supercharged before next oil change. 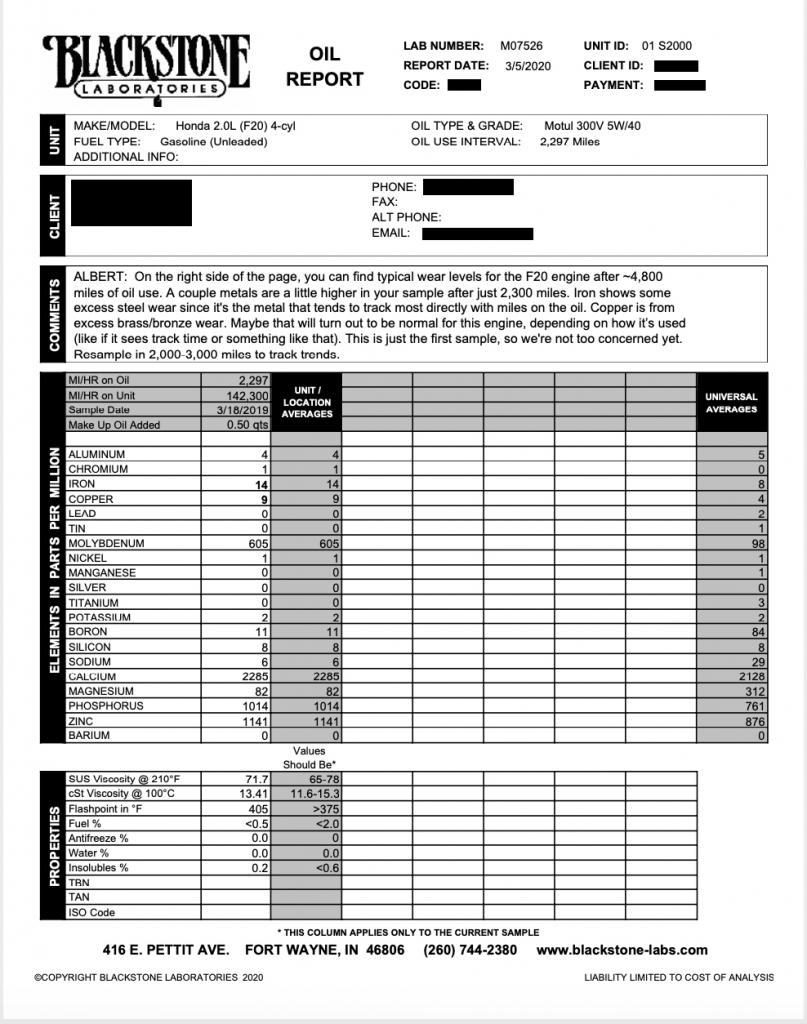 I don't think I would use that oil again!

Keep in mind that the cylinders on that engine are composite and not cast iron. So the iron you see is likely from the complex valve train or timing chain. None of those number are bad, in fact, those numbers are 100% normal for an S2000, I'd not worry about it at all. Also, please keep in mind that UOA is a tool and really can't show you "wear rates" despite the claims to the contrary. What it can show are the OCCASIONAL sudden changes to a trend that would indicate a failing component. Sometimes a UOA won't show anything, even when an engine is coming apart. I've seen great UOA results and oil filters clogged with metal debris. I had an "Inline Pro" Stage 1 kit on my 2004 S2000 with a turbo 2x too big. While fast, it was incredibly laggy, with a 2 second delay, I found it annoying. My previous car, a homegrown Turbo Miata had a smaller and much more pleasing turbocharger setup. The S2000 destroyed a transmission and differential inside of 30,000 miles. I simply changed the transmission with a junkyard unit. The differential got a 3.63 gear ratio, and machined caps for the bearings by Puddydad (silly name but absolutely great workmanship) . That held up very well.
Last edited: Mar 9, 2020

Honda has recomended 10w-30 year round and 5w-40 for winter use 1999 when the car was sold first. Honda never updated this reccomendation. This "weird" recommendation causes endless discussions among S2000 owners. In Germany, most Honda S2000 owners use 5w-40 oil, because they think it offers more protection and 10W-30 is the most uncommon viscosity here in Germany. Almost Zero Choice. At this moment, i use Shell Helix Ultra 5w-40 in my S2000, because it is a very thin 5w-40 - Viscosity 12.75 at 100Â°C - and this oil is GTL with MB 229.5 and Porsche A40 approval. I think this is the best compromise. For peace of mind, i am adding 2- 3 % Liqui Moly Ceratec. The higher readings of iron in this UOA can be caused by the timing chain or a failing timing chain tensioner, wich is a very common problem. BTW, this car was never meant to be driven softly and used for Cruising. It is a little racecar with lights and windshild wipers. Use it this way.

I ran my 2001 S2000 on redline 5W-40. IIRC from when I researched this years ago, while 5W-40 was allowed in the US manual but was recommended in some RoW markets. I would keep doing samples and monitoring, but wouldn't necessarily worry about these results. That is also a fine oil for the car. I sold mine when I bought the Elise, and if anything, owning the Lotus has shown how great of a car the S2K is. Enjoy!
D

Any fuel additives used during this stint. What is current air filter OEM or aftermarket??

I had a track raced AP1 with similar miles for a few years. I would recommend at least running a A3/B3 or A3/B4 rated oil. Really anything synthetic and European. These oils have a nice viscosity sweet spot for performance driving and a more robust additive package. Plus at your mileage, your oil pressure will be a little lower than when new so the extra viscosity will help (I was really attentive to that with my oil pressure gauge). A 0w-40 or 5w-40 worked great. Keep up with using the OEM filter or K&N filter. I've noticed reduced oil pressure with more restrictive filters like Mobil 1. Running too thick an oil over heats it quickly. Ran a 15w-50 and it would temp to 280F within 5 hot laps. Redline 5w-40 or 0w-40 with an OEM filter would be my go-to and just change it once a year.
D

Originally Posted by wings&wheels
I ran my 2001 S2000 on redline 5W-40. IIRC from when I researched this years ago, while 5W-40 was allowed in the US manual but was recommended in some RoW markets.
At least in Germany, the owner manual also state: 10w-30 Year round and 5w-40 in Winter.
You must log in or register to reply here.

Jun 2, 2021
nicholas
C
What oil should i use for my car now? {knowledge-expertise required)

The Difficulty with Oil Analysis Reports