Costco and Sam's Club both have $99 jacks that are very good. Harbor Freight offers a similar product, but their warranty is only 3 months, vs. Costco's lifetime return policy. Here's a picture of the Costco jack next to one of those cheap "trolley jacks" which you can buy for around $30. Which one would you rather use to lift your car? 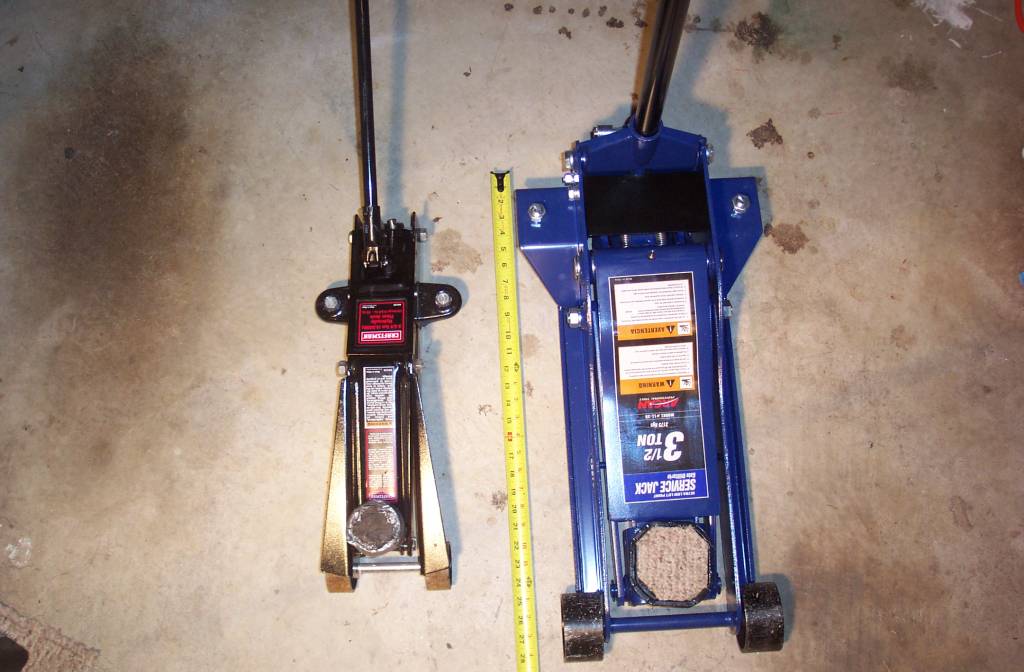 Hold on a second here; Does your Costco actually have that jack or they did at one time?

Alternatively, I could look around for the cheapest Arcan or Nesco jack I can find, and plan on replacing it every two years. I'm not above disposable goods.

I did some research and narrowed it down to the products in this list: http://www.hyundaiperformance.com/forums...html#post818002 Probably going with the JEGS 2 ton aluminium jack and 3 ton aluminium jack stand bundle for $277. Read the posts on the other forum, I'm not going to re-edit it to include all the links here.

That's a lot of money of spend on a jack and stands unless you're going to be using them a lot. Remember the jack is only supporting 1/4 of the weight of the vehicle. I'm in the market for some new jack stands. The 3T ones I bought on sale at Sears are too tall to get under my Corolla. I didn't read the specs carefully enough.

Originally Posted By: Leo99
That's a lot of money of spend on a jack and stands unless you're going to be using them a lot. Remember the jack is only supporting 1/4 of the weight of the vehicle. I'm in the market for some new jack stands. The 3T ones I bought on sale at Sears are too tall to get under my Corolla. I didn't read the specs carefully enough.
Yes it is a lot of money. Check out the list. I have some less expensive ones in the list; follow the link I put in the above post. I made it by process of elimination--these are the cheapest jacks I could find that didn't have more than a few negative reviews about the jacks falling apart in less than a year. I'm going to be using the jack extensively over the next few months--my Accent has at least a dozen problems that need to be worked on. I'm still hoping (but realistically, based on the amount of time it's taking for this car) that I can get an aftermarket modded Civic SI hatchback manual, which will mean more time for a newer car. Go with the OTC 5372 if you don't want to get the JEGS ones--$45.

I'd like stands that go down to 10 inches so I don't have to jack the car way up in the air. The $25 stands Advanced Auto Parts go down to 10.5 inches. Allegedly.

Quote:
I'd like stands that go down to 10 inches so I don't have to jack the car way up in the air. The $25 stands Advanced Auto Parts go down to 10.5 inches. Allegedly.
The 5372's are 12" minimum. The Pittsburgh's are 11.75 minimum. I'd rather go with 3 ton than 2 ton, and HF's are the same price for their 3 ton stands.
Quote:
6x6's work wonders too.
No way in the world am I trusting some pieces of scrap wood to hold up a 2354 pound chunk of metal and plastic. Wood slides and splinters. Wood isn't made of steel or aluminum, and it's not specifically designed or tested by companies who sell jack stands. Pretty sure if it was, they'd be selling wooden jack stands on a regular basis. I posted this on a different forum: http://www.hyundaiperformance.com/forums...html#post818410 "This is what you have: 2.5 Ton Aluminum Racing Floor Jack with RapidPump® The JEGS one is about $70 more (if you don't count the jack stands) at $224.99. Someone at JEGS thought it would be a brilliant idea to make the kit of jack stands and the jack the exact same price as if you'd bought them separately. Price went up by $30, now my top pick is gone. They didn't have the bundle on sale or anything, so I incorrectly assumed the price was stable. A 10% price increase overnight is hardly what I could call stable. The JEGS 3 ton version is $100 more than the HF racing jack. I could maybe get the 3 ton JEGS $260 jack and one of the jack stand sets listed below. These are almost the cheapest set of jack stands I could find: 3 Ton Steel Jack Stands $26.74, a difference of $18.54 between those and the OTC Tools 5372 stands. I like the (probably) superior build quality of the 5372's, and the placement of the feet underneath the stand rather than the feet recessed above floor height with the Pittsburgh stands. 2354 pounds is "nothing" until half of that suddenly drops while your hands are halfway in its guts--jack stands are the last thing I want to skimp on--jacks, sure, no biggie if it fails during pumping, goes right back where you started; chocks, a little less risk, because it's forward or backward single-axis motion (until it falls off stands, and then you've got a rolling falling chunk of more than a ton of metal and plastic), but jack stands are what can make the difference between a night of vehicle maintenance and a night in the ICU. Thanks for your reply. I think I can get by with cheaper stuff, I'm just wary of anything with more than a few negative reviews and a bad general reputation for poor build quality. I could probably get the 1.5 ton junky HF racing jack for $90, the junky HF stands for $27, and save myself $193 worth of overkill. I dunno what to do. Probably hyping this and overthinking it too much. Further thoughts?" I've also thought about spending the extra $50 and getting the 3 ton aluminum JEGS jack and then getting the Pittsburgh or OTC stands. Without the stands as part of the JEGS purchase, buying the more expensive jack seems like a pretty good bargain for the extra 2000 lbs of capacity. I'm still undecided on the two jack stands.

I went with an aluminium 1.5 ton jack from HF. I'll have to wait and see how long it takes to break. I got a set of Pittsburgh 3 ton jack stands from HF in the same purchase, and six wheel chocks.

Originally Posted By: joel96
I went with an aluminium 1.5 ton jack from HF. I'll have to wait and see how long it takes to break. I got a set of Pittsburgh 3 ton jack stands from HF in the same purchase, and six wheel chocks.
That jack gets good reviews. I had my hands on one the other day but I used my 20% off coupon on their $40 cart. I find a lot of need for a cart to hold tools and parts so I don't have to bend down and get them off the floor constantly. Still might go back and get that jack but I've been using my Rhino ramps a lot lately to get under my Rav4. I've been buying more and more hand tools at HF and I'm very happy with them so far.
V

Originally Posted By: engineer20
which jack or jack stands are the best? meijer=pro lift walmart =black jack oreillyauto=ac delco autozone=duralast etc The list goes on. Which is the best and why? The walmart brand is the cheapest at only 18.88 Is there a reason why? Is it worse? I have ac delco which i bought fron oreillyauto when it was on sale. Is ac delco good and hows pro lift from meijer and can you mix brands for the jack stands or should you use the same brand for jack stands?
In my opinion, the jacks everyone should have: 1 20 ton bottle jack 2 4 ton bottle jacks 1 Floor 2.5 ton "low clearance" trolley jack. 1 Floor 2.5 ton service Jack, I REALLY like NAPA jacks here, WITH THE RUBBER PAD. 1 Hi-Lift (Brand) mechanical jack. All steel, should last a lifetime if kept out of rain.
Last edited: Jun 6, 2015
B

I was in Lowes a few months ago and found a 2 ton Kobalt all aluminum service jack with integrated LED lights on clearance for $50.00. This jack had an original price of two hundred and something dollars (I think $220 or $230). I bought the last two in stock and haven't seen any more. There is no difference in this jack then one by Craftsman or any other company then the color. If you're by a Lowes, it may be worth it to stop in and check if they have one in stock. Here is a link to the jack. 2 Ton Aluminum Jack at Lowes

Now that I have the jack and chocks, I've got to figure out jack stand placement and overall car lift strategies. I think I'm supposed to only lift the front or the rear at a time. Gereral1 said something about using pieces of wood to gradually lift up one end of the car, but I forget what that was for; maybe to get extra height or maybe to inch it up evenly until jack stands could get under it. There was also something about putting a wooden block somewhere in the middle as a safety precaution (I guess in case the car slips off the jack stand). I'll have to re-watch his videos to figure that part out. The strategy varies based on what part you need access to.
E

I saw a thing at meijer called a unijack which looked like a bottle jack combined with a jack stand. 2 tons 39.99 now on sale for 29.99. Is this any good? It said it was for suvs and trucks ajd stuff with a higher clearance and they had a 6000 lbs one too. Anybody use this and is it any good? Thanks.

I know how you people love HF tools, but to me, their jacks appear to be the best bang for the buck all around. Compared to the majority of recommendations here, the COO, design and perhaps the original manufacture will most likely be the same.