This bike survived a lot of events and racing this season, including being raced solo in the 6 Hours of Glen Helen and the 10 Hours of Glen Helen endurance races. In October it will be raced in the 24 Hours of Glen Helen endurance race, but this time as the primary bike on a two-bike team where it will probably see about 18-20 racing hours depending on if it holds up, blows up, or how much we stop for repairs/maintenance. Normally in dirt bike racing we don't care much about OCIs. Just dump and replace after the race which could be anywhere between 45 minutes and 4 hours of use depending on the event/classes raced. But this bike is being used for endurance racing, and the competition is stiff, so stopping for maintenance is something some people do and others don't. We ran a minimum pit stop strategy at the 10 hour to eek out a few extra positions in pursuit of a trophy finish, and it really, really mattered. With an hour left and only a 40 second gap on the competitor behind, there was no room to stop at all and I peed myself twice for that silly trophy

lol. So, needless to say it has been interesting to monitor the oil condition and engine wear in this case, working up to a 24 hour OCI, since we want to shoot for another minimal pit stop run at the 24 hour. When the competition is making that midnight stop for air filter and oil, we'll attempt to just chug past and run this baby into the ground

For your entertainment, here's how it looks so far. Enjoy! Here's the motor oil report, using Mobil 1 10W-40 (auto oil) 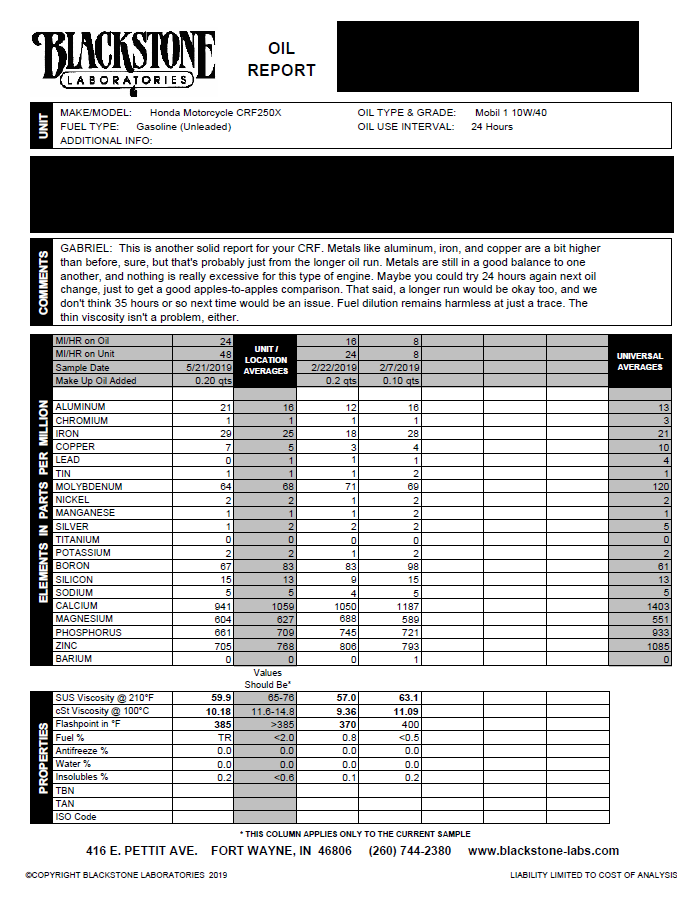 Here's a strip of the 24 hour filter.

Here's the transmission report. This caused some headache this season. The clutch was not really happy with Mobil Delvac 15W-40. I won't get too into the weeds on it (but if you are extremely interested or need to kill time with free entertainment, there is a publication called Torture Test Magazine with more details) but the OEM Honda CRF250X friction disc compound just did not jive with Mobil Delvac 15W-40 for whatever reason. The clutch pack needed to be replaced mid-season and was a problem during the 6 hour race where it overheated. Switching to a different clutch friction disc compound (still Honda OEM, and no changes to our stack height or spring pressure, but just a different friction compound) made the clutch happy with Mobil Delvac 15W-40 so that was interesting. Mobil Delvac has been awesome on other clutches but this one specific compound wasn't a good fit at all. I know it's funny, switching out the actual clutch pack instead of just a switch to a more grabby oil, but because of constraints with the publication the bike is being used for, that's what had to happen. It will be interesting to see what changes on the next oil report with the clutch now using different friction discs that aren't causing a heat problem. 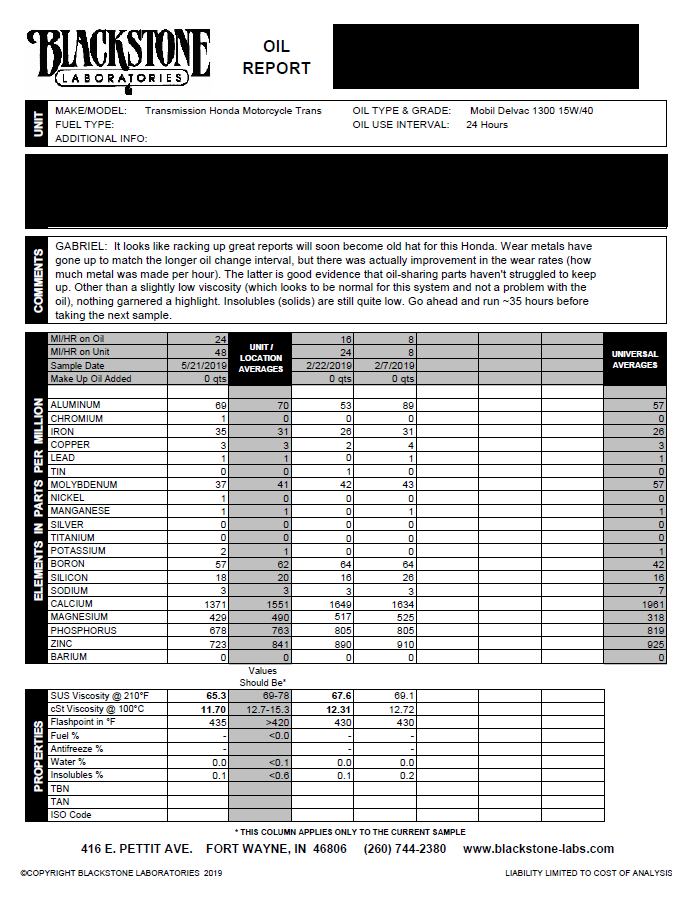 Clutch pack black and blue after the overheat, before switching to different friction discs. 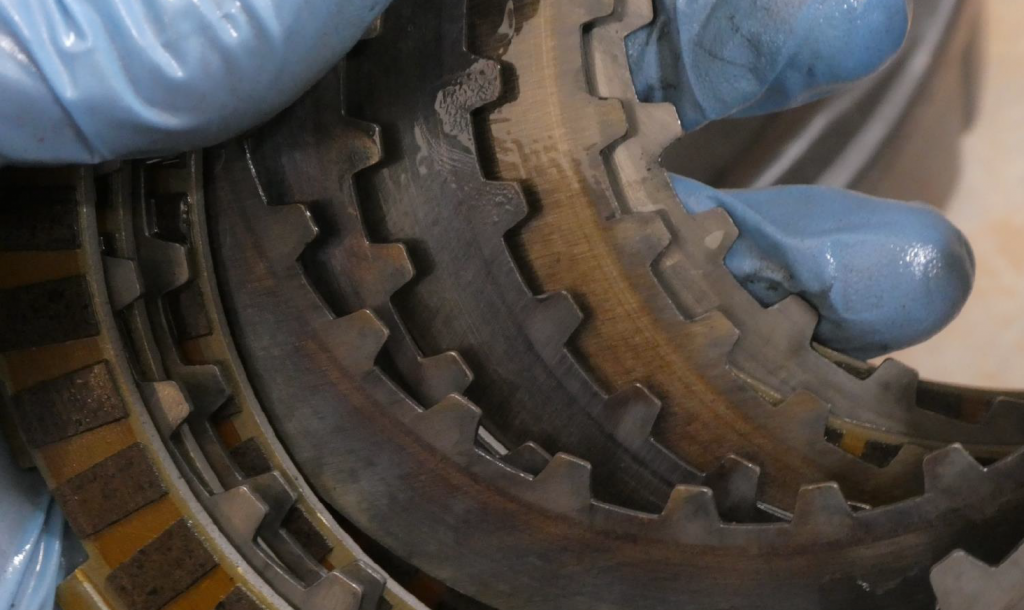 Those wear particles in the oil filter are quite large are numerous. Do you normally see that? I would put a strong magnet on them to see if they are iron/steel. What is your reason for using Mobil 1 10W-40 (High Mileage, I assume) instead of a motorcycle oil?

The metal chunks are aluminum, and it's normal on this bike but really is indicative of high wear, just not high relative to what is normal on the bike. The piston in this bike has skirts the size of a postage stamp and not much more than the crown and single compression ring area, so there's not much supporting the piston from rocking. So the small areas that do support the piston from rocking flake off pretty quickly. Auto oil is used because the bike was used to write a long article about cost of running, and running the bike to failure, and we had to go with a 10w-40 that is extremely widely available, not limited to one store or motorcycle stores. It's not supposed to be ideal or correct. So there's not much reason other than it's there, on the shelf, everywhere.
1

ATF is nice if you like the clutch to grab and hold. It's what I'd be using in the clutch and trans side if I could be using whatever I wanted.
1

Originally Posted by torturetestmag
ATF is nice if you like the clutch to grab and hold. It's what I'd be using in the clutch and trans side if I could be using whatever I wanted.
I have tried atf for a solid season, different motor oils too. Best shifting and clutch feel has been with belray gear oil and honda transmission oil.
K

Not sure that Mobil 1 is a 'torture test'.. "I've used Mobil One Car oil in my bikes, 5w30 to 15w50 since 1989, long drain, no problem. Stacked up 160k+ miles on 4 bikes. All wet clutches, no slippage." https://www.bobistheoilguy.com/forums/ubbthreads.php/topics/3762190/Honda_GN4_oil? If you want to do a real torture test to dispell some myths use an 'energy conserving' oil. Here are some discussions on the CRF250X and 'energy conserving' https://thumpertalk.com/forums/topic/1178344-oils/ 10w30 Energy Conserving is "BAD"

do you want to stay with M1 for your 24hr race or are you willing to switch oils now and see how better you can do?
M

If concerned about clutch discs, don't run Mobil1 Hm oil
You must log in or register to reply here.