Changing to DT-40, should I run break-in oil?

2003 Porsche Carrera C2 coupe, 108K miles, daily driver 400+ miles a week, mostly highway, some traffic. Currently doing a 4K OCI using Liqui Moly Leichtlauf High Tech 5w-40 & Liqui Moly Ceratec added. Done about 6 oil changes since I purchased the car 1.5 years ago w/82K on it. Doesn't use a drop of oil. Recently someone posted a virgin UOA of my oil and the numbers were not impressive, especially considering I drive my Porsche pretty hard, no track sessions or auto cross. So I decided to take a look at other oils with better numbers. There is a famous engine builder (Flat 6 Innovations) that specializes in my engine and they swear by Driven DT-40 and a 5K OCI for street use. Flat 6 worked with Joe Gibbs to come up the oil originally and as such is formulated exactly for my engine. I haven't been able to find a virgin UOA of DT-40, but according to Flat 6, the numbers are very impressive and just what I need. I'm pretty certain I'll change to DT-40 and go with a 4K OCI, because I do drive it pretty hard, even though street only. Flat 6 says that when you change to DT-40 you need to run some JG BR break in oil for a bit, then put the DT-40 in. Here's an exact quote from Jake Raby, the owner/creator of Flat 6: "I would buy a case of JG BR break in oil to use as a 100 mile flush before changing oil. This lessens cross pollination from one vastly different base oil to another and it does make a huge difference on the first two oil services after switching to DT40. I know this. Here I assemble engines with JGR assembly lube and break them in on JGR BR break in oil, then use DT40 from that point forward." That quote seems a bit of an exaggeration, but I'm not the oil expert, that's why I'm posting this here to see what the guru's of BITOG have to say. Bottom line - I'm scared to run a break-in oil in my engine with 108K miles on it! What say you guys? Should I run break-in oil for 100 miles, or just change to DT-40? Side question - if yes on the JG break-in oil, which should I use, there are three types, I'm thinking the 10w-40, ZDDP enhanced: BR Break-In, Mineral, 15W50 BR Break-In, Mineral, 10W40, ZDDP Enhanced Racing Break-In BR, Mineral, 5W30

Sounds like a great way to pad his sales numbers and pocketbook. While I don't have a Porsche, it's quite hard to see what a mineral-oil based flush is going to gain you, vs. going from LiquiMoly to the DT right away. Unless you've got money to burn on the DT, there's no downside to the direct switch other than understanding your initial UOA with the new oil will likely show just slightly lower elemental numbers for Ca, Zn, Mg, etc than once the remnants of LiquiMoly are gone in 2-3 changes, but the contaminant/"wear" elemental counts will be accurate. In addition, if you do the "flush" with mineral oil, you will swap the remnants of the LiquiMoly synthetic oil for remnants of the mineral oil, yet you'll be thinking everything is perfect according to those instructions. I'd rather have a mix of two synthetics in my sump vs. a mineral-synthetic mix any day, but that's just me in my other "flat world"

That all sounds ridiculously over-the-top

I'm sure the Driven DT40 product is a good lubricant, but why you would be asked to run a break-in oil on an engine with 108,000 miles on it? The whole premise regarding "cross-pollination" sounds dubious at best.

With a 103,000 miles and running good?...I would keep doing what works. What possibly could a magic oil diet fix? I bet that engine builder takes a pound of diet supplements every day!

Doesn't use a drop of oil? Runs great? I wouldn't change a thing...
L

To be quite honest...... I think even adding the Liqui Moly Ceratec is "overkill"
T

There is no need to use break-in oil. Just switch to DT40. Here's a VOA on DT50. Same add pack as DT40. DT40 is what Lake Speed Jr uses in his own Porsche also. 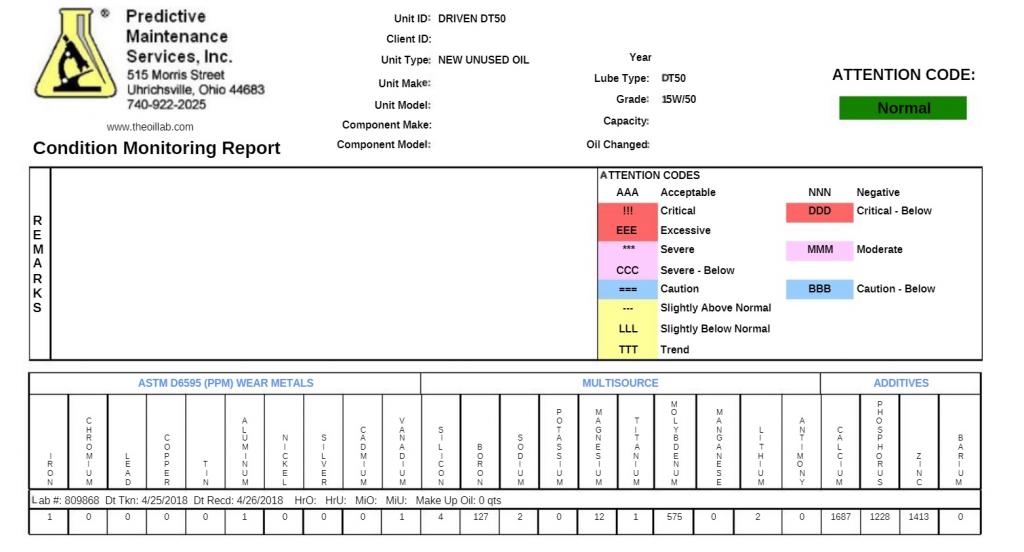 I dont drive my 99 boxster many miles per year, but drive it hard. Even did a hard 2 day drive at the tail of the dragon this past year. I change my oil annually regardless of mileage. My results attached with dt40 the last 2 changes, before that motul, and unknown first oil in it when i bought it. Wear metals continuing to decline, and drove it harder this past year than ever.