Cause of the dash/engine rattle...

So we were hearing this rather prominent rattle coming from the dash area of the 330ci every time upon driving off...couldn't find anything loose in the dash, and thought I'd just open the hood and check inside... and found THIS on the top of the engine cover !!! 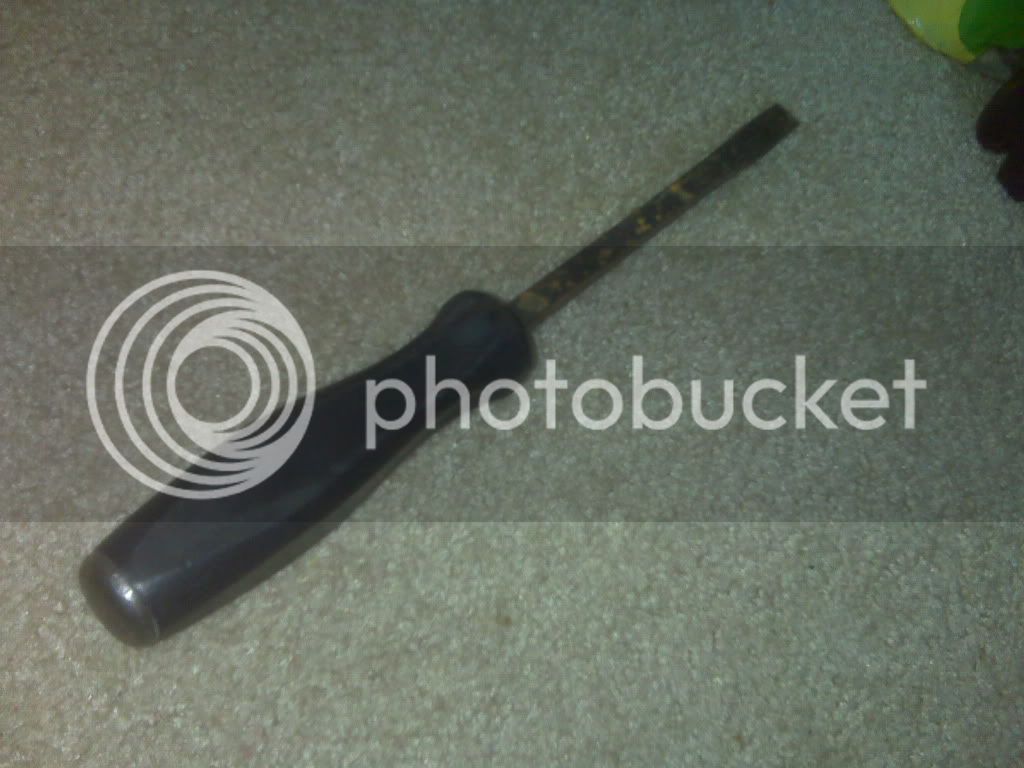 It's about a foot long, and heavy! should I complain to the last place that did the Oil change on the car? I can't really prove anything, and the noise didn't really emerge until today. I am glad it didn't fall off the engine cover and get caught up in pullies/belts etc !!! WTH!
9

You got oil change for free then.30 some dollars for that prybar.
S

I'd say you got lucky and SWEET DEAL I'm jealous

You now know where NOT to get anymore service. In my book any one who leaves their tools in the work area never sees me again. (esp if you are a doctor

) Glad there was no damage. Could have been very easy. What in the heck would they need a PRY BAR for in your BMW??? Bill PS: Also not impressed with snap-on tools if they rust that easy...

Bill: I agree. i think they may not have actually used it., but you know, he/she might have had it in her/his hand for some other reason, and probably just rested it on the top, and forgot to take it off - that's what I think... I did get an alignment at the same place (not @ the same time as the OC)...and I don't think they would need it for that either, so i think someone had the hood open and 'rested' it there for a moment, and forgot it. Anyway, whether they used it or not, that doesn't matter - they left a [censored] 1 foot long screwdriver sitting on top of the engine!
U

This is why after all these years I still don't understand why they don't have another person give a car that has been worked on a once over before it leaves the shop. Most of the places I worked after the work was done a supervisor double checked the entire car for a few minutes to make sure everything was right. Essentially look over where ever the work was being done. OC....under the hood, under the drain pan, near the oil filter, ect.

How long ago was the oil change? You mean to tell me you did not pop the hood and check the oil level right after you picked up the car from an oil change? And you call yourself a BITOG'er???

Seriously though, glad the disaster was avoided.
9

OC was probably about 5 months ago...but there's no telling for sure that it happened then or did it happen during the tire/alignment appointment 2 weeks ago ? ... they do a fluid levels/under hood check every time someone brings a car in, so they opened the hood then also... I did check the oil level soon after the OC, but I guess I never noticed it: the area where it was lodged in is kinda hard to see: it's a narrow area between the top of the engine cover and the area right next to where the windshield starts. Even today when I was actively looking for something there due to the rattle, it took me a while to see it - when it was wedged deeper in there, it was probably near impossible to spot... The screwdriver being fully dark gray/black, just like the surrounding engine area sure didn't help either...
H

Accidents happen, its human nature. You just got a free bonus with your oil change or alignment. I would take a free tool anytime if it was offered with a service.

Originally Posted By: 97tbird
OC was probably about 5 months ago...but there's no telling for sure that it happened then or did it happen during the tire/alignment appointment 2 weeks ago ?
Go around all the shops you've been to and ask each one, "Excuse me, is this your tool?"

A tool like this is absolutely not needed for an oil change, so I'd suspect the tire place to be the more likely culprit.
9

Hmmm...it's almost like a puzzle now: Place 1: on 2 separate occasions: patched a tire did state inspection Place 2: on 2 separate occasions: changed oil installed new tires and did alignment This is the order of events, from the oldest to the most recent: oil change (place 2) tire patch (place 1) state inspection (place 1) New tires + alignment + front control arm bushings (place 2) Place 1 is like a mom & pop garage Place 2 is a reputed BMW specialized indie shop SOLVE THE MYSTERY !!! WHO LEFT IT IN MY CAR ?

I had an inspection mechanic once leave his sticker scraper (razor blade) unfolded on my passenger seat, at night!!! I was a nice guy, brought it back.
L

I worked on a customer's boat at his house and left a small SO chisel. Every time he saw me until I got it he reminded me of it. It was very nice of him to take such care to return a small item like this. He is a surgeon and has lots of important stuff to worry about. But it is just the kind of a guy he is. I have some great customers.

Originally Posted By: ledslinger
He is a surgeon
So, he's guilty of leaving some of his tools in less than ideal places, too?

Originally Posted By: kozanoglu
You got oil change for free then.30 some dollars for that prybar.
Its Snap-On, man! That's probably a $100 prybar. But seriously, Some years ago, a friend had an S-10 Blazer. Bringing it back from a tune-up, he was concerned when he noticed the hood looked a little mis-aligned when closed. Opening it up for a closer look, he found a spark plug socket sitting in the little channel along the sides, where the hood's hinges were. It was preventing the hood from closing properly!
9

So, would you guys change your impression about this place and not trust it anymore? I have only had 2 appointments with them and both times, I was satisfied, (except this prybar incident)...They're very highly regarded in the area for BMW specific services... I do have another indie place I can go to, but it's further, and as it's a small shop, have to make appt's really early in advance...

I'd give them the benefit of a doubt and keep using them until they screw up again. We all make mistakes sometimes. It also depends on a particular tech and not the shop. Some techs are more diligent than others, but again, everyone can have a brain [censored] once in a while. It'd be nice if the shop had some sort of a policy/checklist where another employee does a thorough look-over before the car is returned to the owner, but how many shops do it these days?
V

Don't you watch them like a hawk when they man-handle your precious baby? So far, I have found a 10mm bolt. Unfortunately, it was after the timing belt job which I was not able watch :-( Somewhere on my engine, it is missing a 10mm! - Vikas
T

Depending on the construction of your car's front end, I can easily see the pry bar being used in the course of the alignment. How else do you move the suspension to where it needs to be? Regardless of the cause, the incident is worrisome. What if there had been no clearance, and you ended up with a nice impression in the hood?
You must log in or register to reply here.