I frequent the local car dealers when they are closed and spotted an interesting car. A 2018 Elantra Sport with a stick the dealer just took in on trade. The car has some minor body damage. A crack at the top of the front bumper and some minor creases on the hood. It looks like an object on the road hit it. I doubt it caused any structure damage. The car has 19K miles and a clean Carfax. It shows being serviced 3 times. Because of the damage and the detail crew not cleaning it yet, I went to the dealer when open and went directly to the sales manager. I told him I'm interesting in buying it, the car is damaged, has a stick and your probably going to auction it off, so I'll buy it at auction price today and can pay by check or cash. The manager had to dwell on it a few days and called me yesterday. Said it's $8000 firm. I bought it. It ended up being just over $9K with tax, title and document fee. I'm taking it to a few body shops today for estimates. Hopefully I didn't shoot myself in the foot buying this. I'll keep you updated. The car has 201HP and is peppy. It handles and rides better than my VW and the brakes feel fantastic. It does have a 1.6L turbo direct injected engine. Unlike the other Elantras, the Sport trim uses an independent rear suspension. Pic of my gorgeous wife at O'Reillys we went to buy a few detailing products. 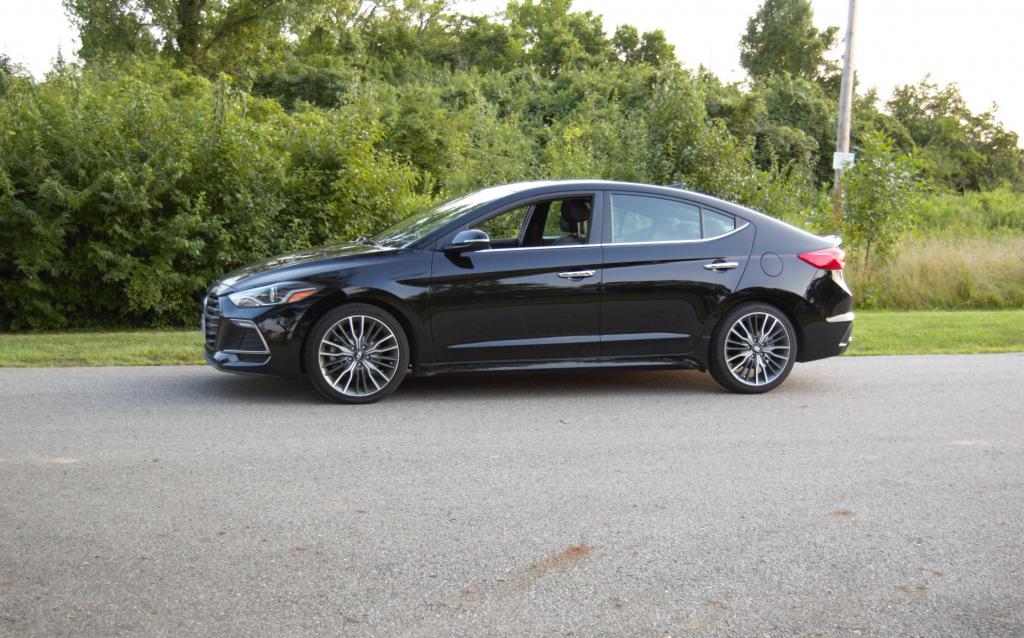 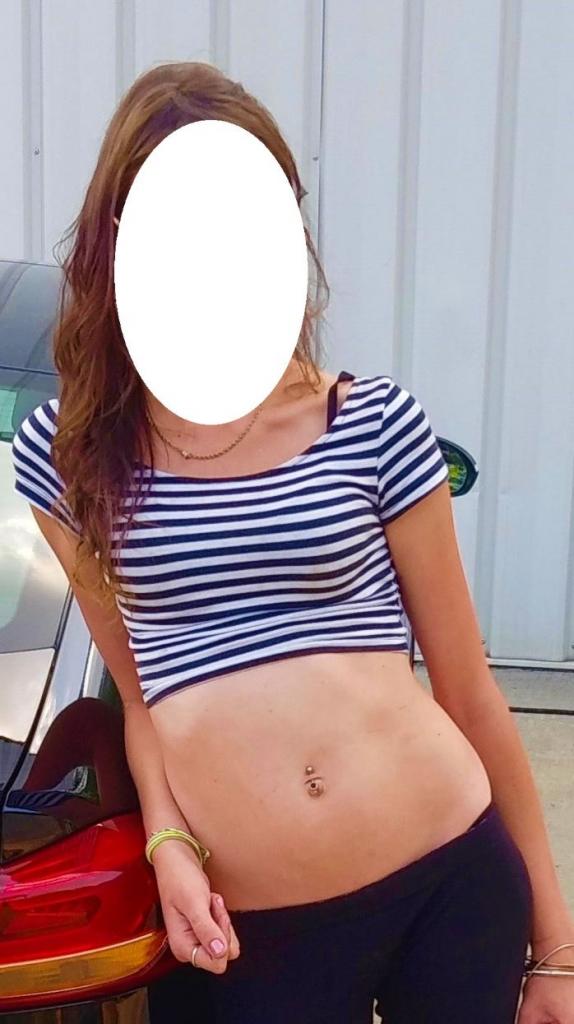 OOOOH MY!!!! Who is that BEAUTIFUL thing in the second picture????

Friend has an Elantra sport that he just put an exhaust on. It sounds pretty cool.
K

Do you have a picture of the car's damage? How does your wife get around with that white oval covering her face? I'd like to meet her jeweler.

Kira, she always wears cheap costume jewelry when exercising, going to the gym and doing chores. This is the pic of the damage. There is black duct tape covering the bumper damage and there are a few very small creases and a small pea sized dent in the hood. A friend told me the bumper has to come off but they might be able to plastic weld it. Damage: 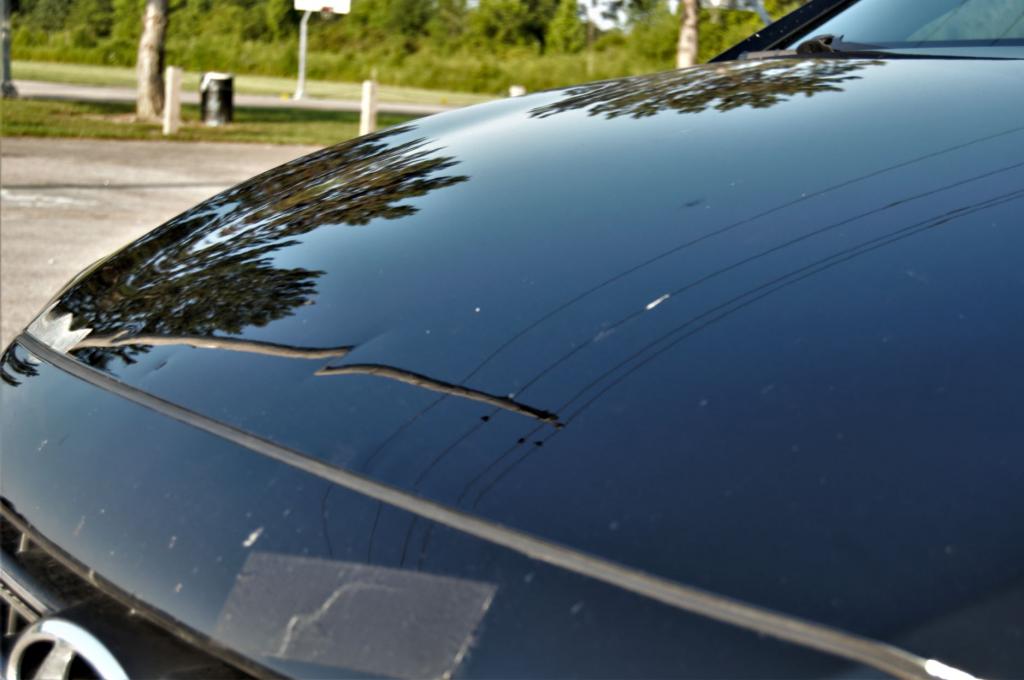 That's a lot of car for that price. Hope your body work works out okay.
S

Looks like a well purchased vehicle. The only question that I would have is what is the condition of the clutch and associated hardware. I would have that question about any used vehicle with a manual transmission where I did not know the previous owner. Good luck!
P

Originally Posted by SJUMBA
Looks like a well purchased vehicle. The only question that I would have is what is the condition of the clutch and associated hardware. I would have that question about any used vehicle with a manual transmission where I did not know the previous owner. Good luck!
I feel exactly the same. I would hesitate to buy a used M/T vehicle because replacing a clutch on a FWD car is very pricey.....and it is a 'wear item'. PS: I think the OP did quite well....and the 1.6T is supposed to be a good engine....but prone to LSPI....so use a D2G2 oil.
C

You may be able to buy a same year & color(looks like black in the pic) hood & front fascia(and/or other parts) off of a rear end collision Elantra Sport and not even have to paint a thing, just replace. Look into that first and do the work yourself while saving a ton of money. Otherwise, the car looks good enough to drive daily until you find what you're looking for. Good Luck! CB

If the clutch goes, I'll replace it myself. I replaced the clutch on my GTI. The 1.6's in the older Velosters are prone to LSPI and had weak connecting rods. Good advise on D2G2 oil. I'm going with Pennzoil Platinum. I doubt I'll find matching auto body parts locally. You don't see Elantra Sports everyday.

Is that what they call a bumper these days? I just thought it was a leading edge metal trim for the hood.
A

Killer price on the Hyundai. BUT, I would not let my wife wear cloths like that. But I am conservative this way I suppose. Enjoy.
S

Originally Posted by ARCOgraphite
Killer price on the Hyundai. BUT, I would not let my wife wear cloths like that. But I am conservative this way I suppose. Enjoy.
I'd totally let my wife dress like that. Win-win for the both of us. Now buying a black car, deal or not... Anyhow, sounds like a good deal, hope you get it fixed like you want. Good luck. Looks pretty good to me.
T

Originally Posted by PimTac
Is that what they call a bumper these days? I just thought it was a leading edge metal trim for the hood.
Lower Front Valence
B

If they still build them like they did in 2013, they are very good at frontal collisions. My son got hit head on by a car doing 50 mph, and he was doing 50 mph too. He ended up with a very bad bruise from the seat belt, and two broke bones in his back. Every air bag deployed...the side air bags too. The firewall did not collapse. The Elantra saved his life. The other driver in a Saturn died from brain trauma, and they had to use the Jaws of Life to pry her out. The firewall on the Saturn was in the driver seat.

Congrats on a new car. Sounds like you got a great deal. I thought you were looking for for a truck? Is this a replacement for your GTI?

Originally Posted by Quattro Pete
Congrats on a new car. Sounds like you got a great deal. I thought you were looking for for a truck? Is this a replacement for your GTI?
I'm selling the GTI as soon as I get the Elantra repaired. I'm still in the market for a truck.
C

Originally Posted by skyactiv
Just got my first estimate on the body damage, $1452.
A couple more quotes could get that down, but adding that to the amount you paid still adds up to a great deal. You did good on that one.
You must log in or register to reply here.