I don't tour the country on my bike, I like to stick to back roads, and if good riding country entails too much main road riding, I just go back to my favorite roads. I've only had a digital camera since 2003, so that is where recording of photos on computer began. On my end of year ride down to Awakino for a beer at the pub, I've been looking for this sign where I took a photo of my 1987 Honda XLV750 in 2003.

I thought I found the remains of it here...but it doesn't seem quite right. This is from the bottom of the hill leaving Marakopa. 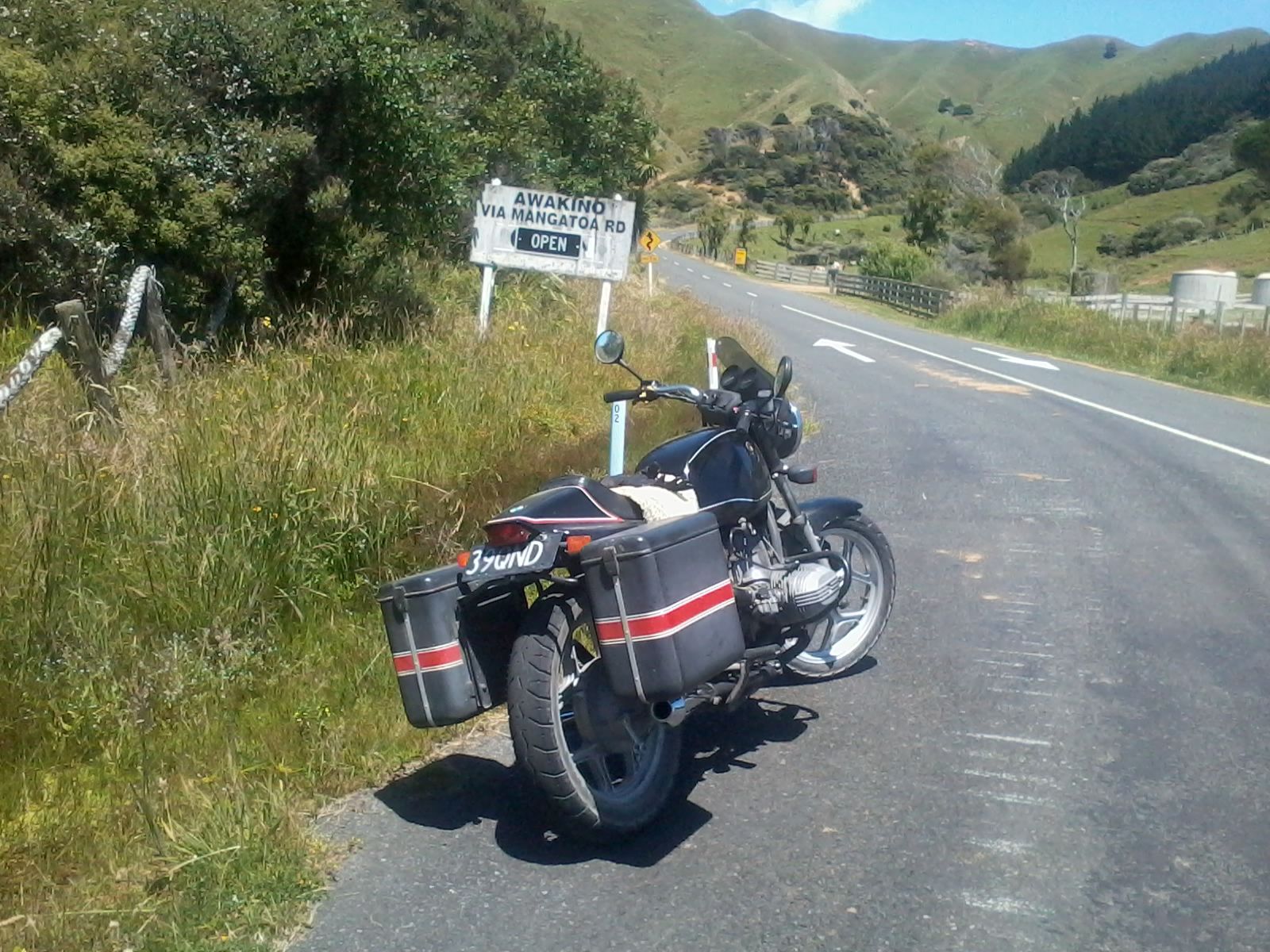 But in 2003, the Marakopa hill was sealed, this is the XLV750, looking down on the seaside village of Marokopa. I'll have to look somewhere else next time I'm down that way.

A few years ago, looking back at Marokopa with the BMW R65.

It was a hairy road back in the days when I took the XLV750 on it, but now all but 12km has been sealed, so yesterday had road tyres on. But there are still very tight dangerous roads down there. Near the Awakino end, Taumatamaire Rd comes into Manganui Rd, I get onto it from SH3...have to do nearly 20km of main road to get there. A couple of years ago, coming out. 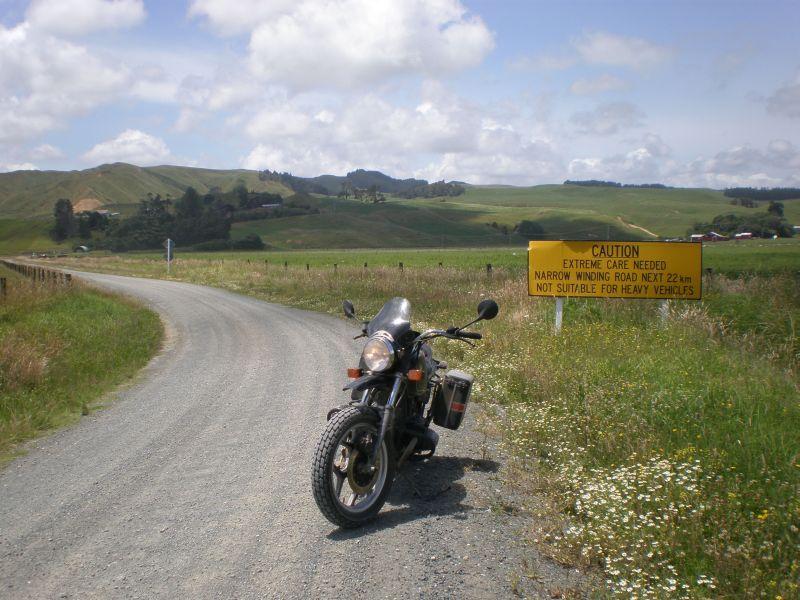 Last year I did Pomarangai Rd, which cuts in a lot further north. I've done them more than once, but don't think I'll do them again, they are not difficult roads, just very narrow, windy, and absolutly nowhere to pass. In places if I'd met an oncoming car, I'd be down a cliff. 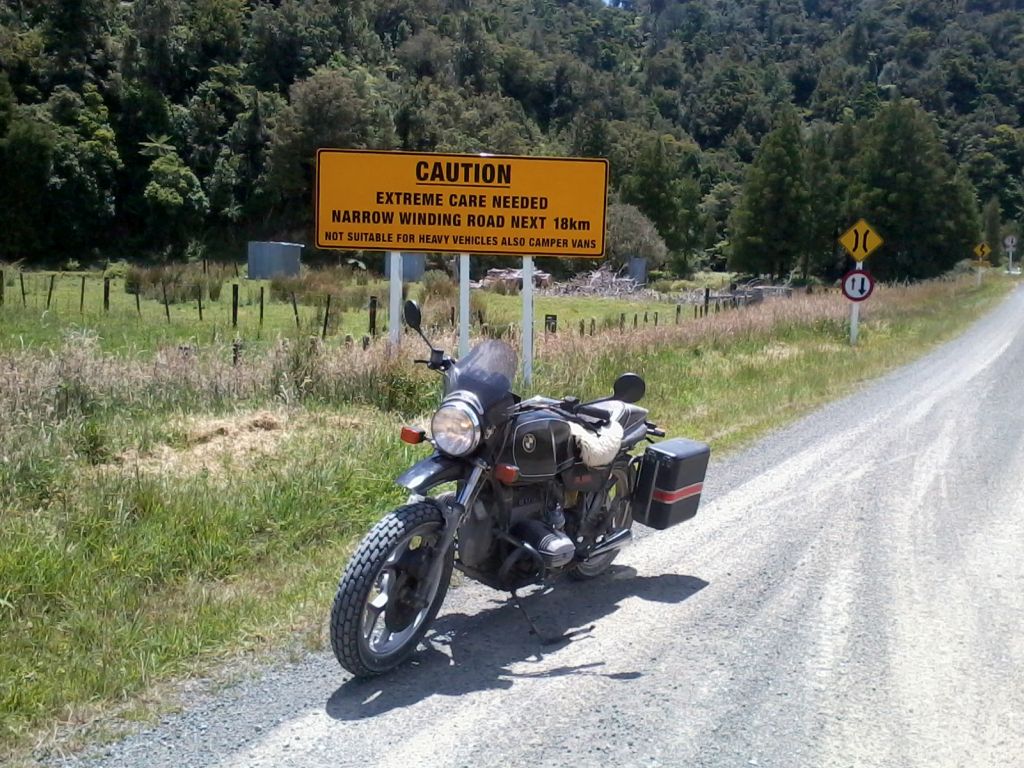 I'll come back with some more before and after pics.

Further north, the road between Raglan and Kawhia is a gnarly gravel road, always in a bad state. The road splits and rejoins further south, the left side had a road closed sign up for some time, there were a couple of plastic barriers that I would ride around, no worries. But late 2006, I came across this, on the 1997 Yamaha DT230. I studied it for a while, but no way through, and it was a big drop to the river. 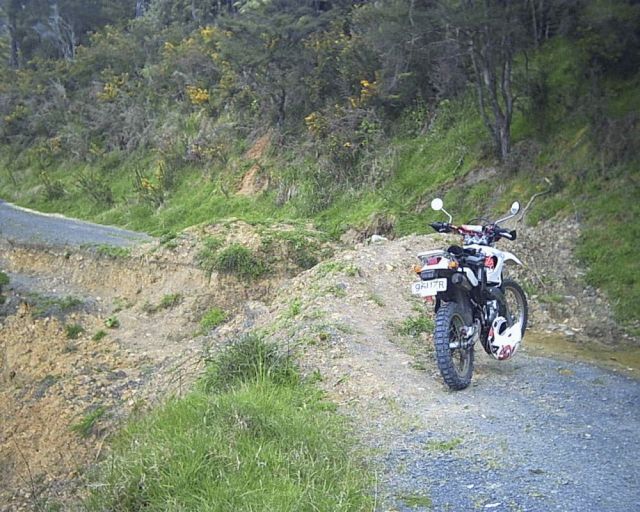 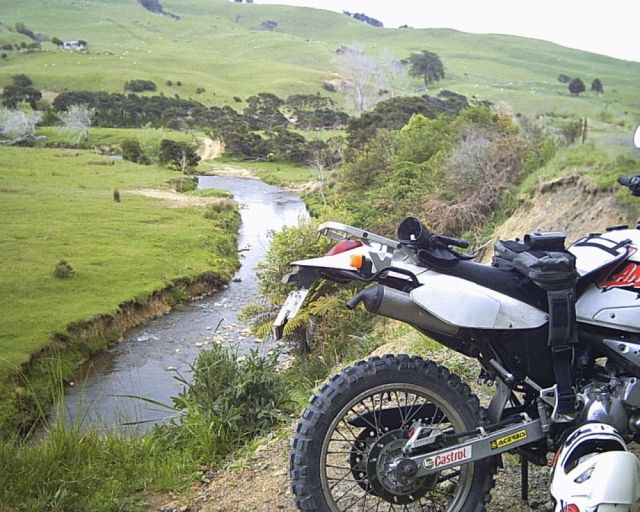 While I was watching I saw a car drive across a paddock and through the stream...the locals had it sorted. So I followed their route. Across this stream, and another recrossing later. I'm a trials rider...walk the section before attempting. 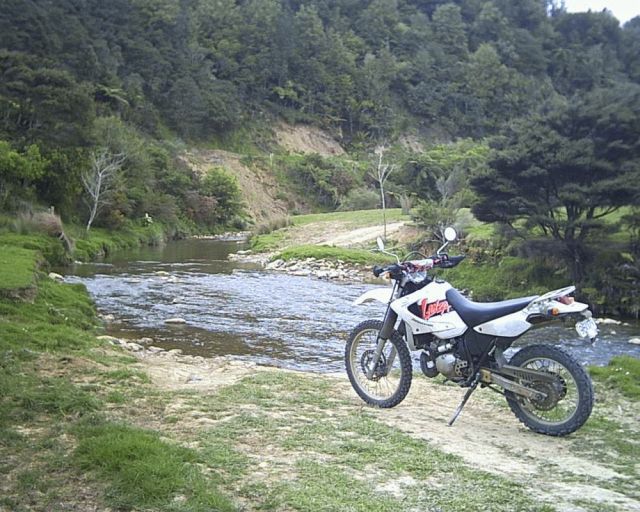 That's the slip up there. 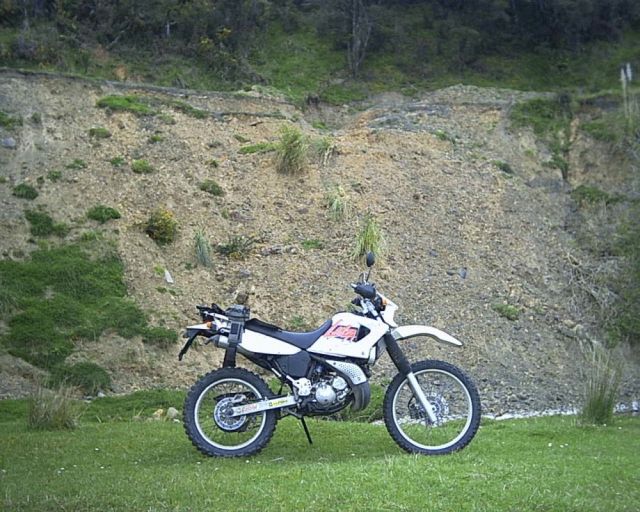 In 2011 it looked like this, passable, but only on a motorcycle or quadbike. 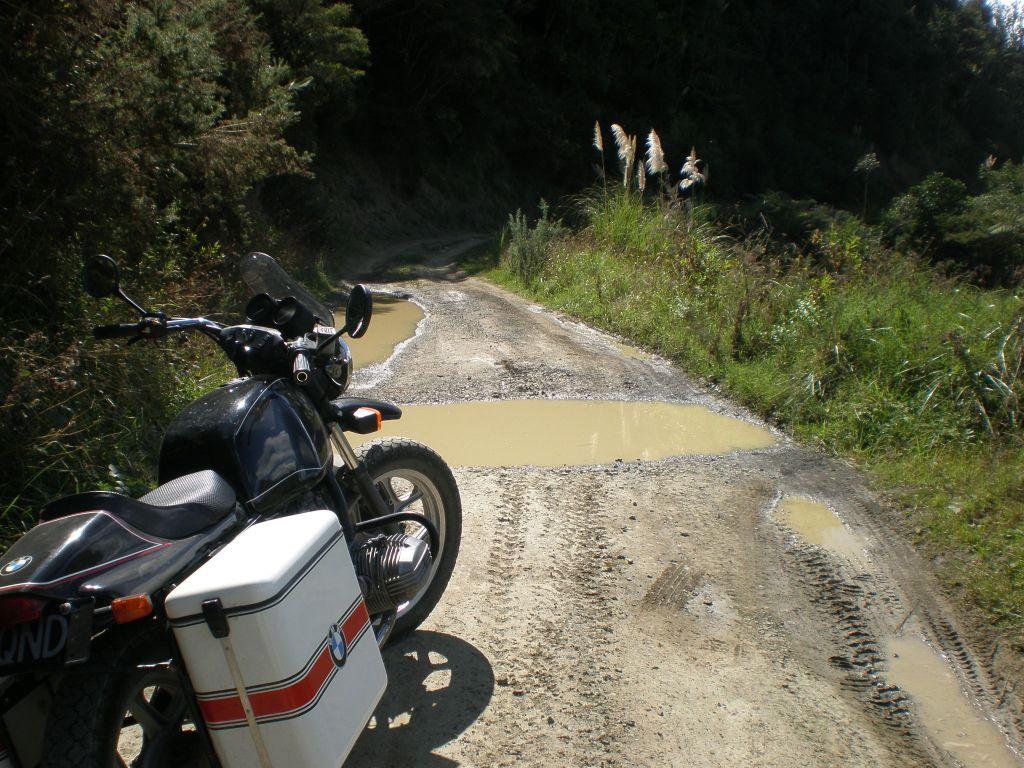 Now it looks like this. The road is still closed, but...

Back country...was this a warning? 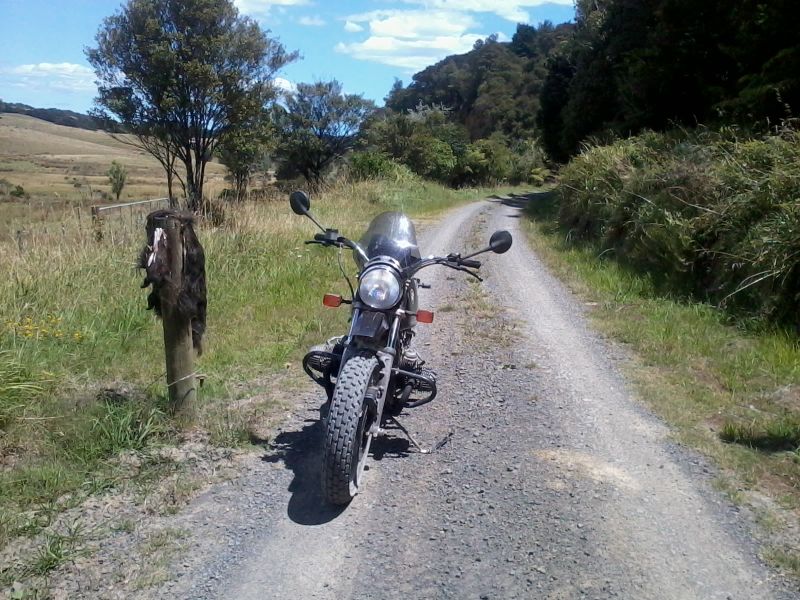 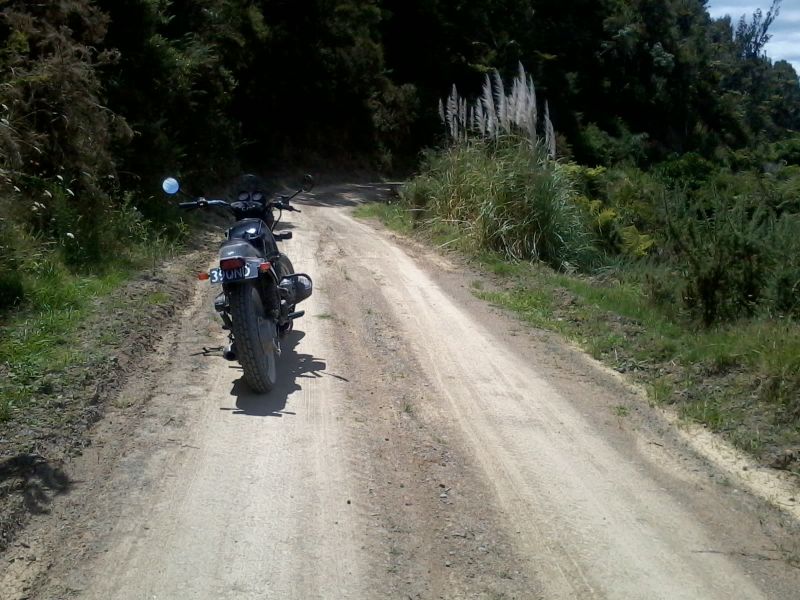 Looks like a great experience. Thx for posting. Be well.

Closer to home, to the north east is another road with warning signs. Here with the 1992 Yamaha XT400, by this time an XT621 with Acerbis tank and Supertrapp. I think the US only got the early red frame white tank model...we call these the technicolour models. Probably 2008.

There is a reason for the warning signs. After a big storm I came across this. No way through.

After studying it for awhile, these guys pulled up in a Navara ute, pulled a chainsaw out of the back, and cut a path through. Perfect timing.

I found I can drag in one before digital, back in Instamatic days. On the West Coast of the North Island are 3 harbours in a row, Raglan (famous for it's left hand surf break) Aotea, and Kawhia harbours. Everyone knows Raglan and Kawhia, but Aotea is a forgotten harbour, and in the late '70's I had a section there with a caravan on it. A friend had a bach there (pronounced batch, comes from batchelor pad, and is just a rough shack or crib). It was set back from the beach, and a walk over a little rise to the beach, after a storm the harbour mouth changed, and the area with holiday homes on it started to erode, and the place mysteriously burned down not long before the sea reached it. This is my 1954 Austin A40 parked down there, maybe 1978. Using a donor Austin A60 Cambridge I rebuilt the 1622 engine and replaced the 1200 in the A40, and later I fitted the front and rear ends of the A60 as well. Originally on 17'' wheels, it's sitting on 14'' here. 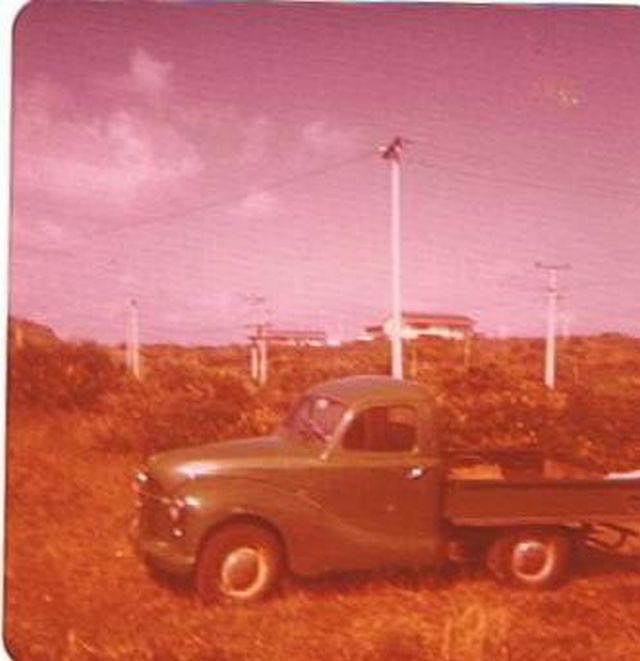 Back 30 years later on the DT230. The land has been reclaimed, you can see a discolouration in the grass which is the reclaimed part. The front of the old house would've started at that rock. Iron sand dunes on the otherside. 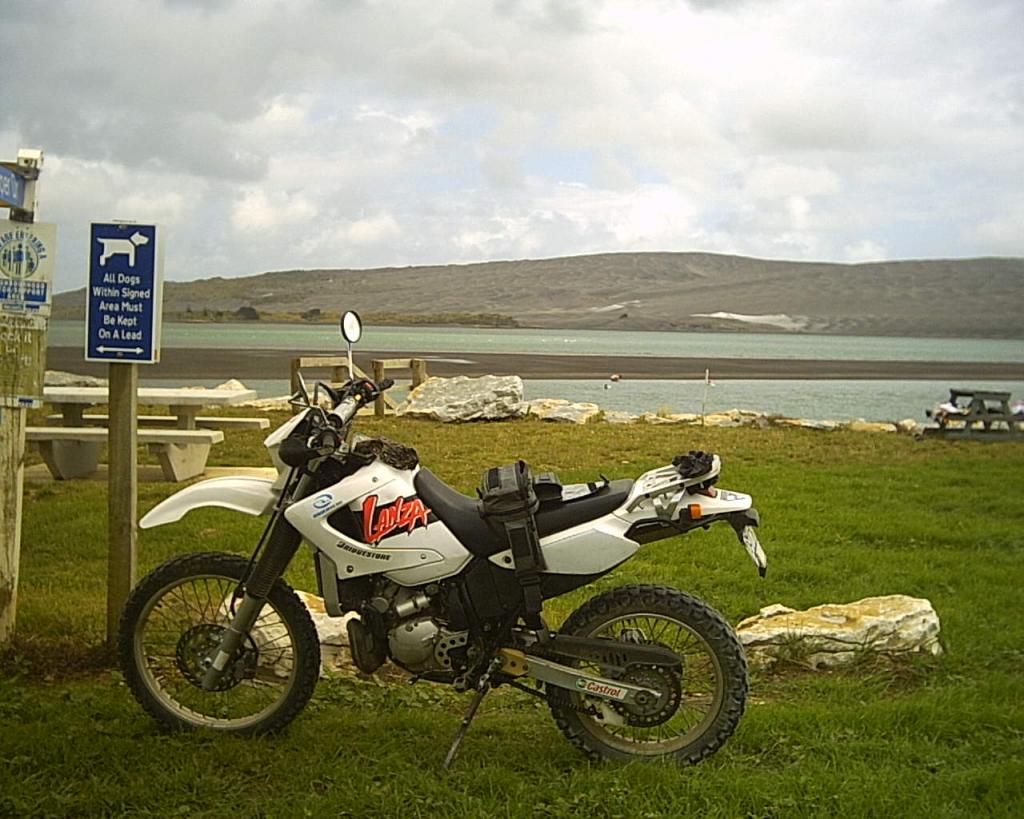 Turn 180 degrees, and there is my old place, with a nice bach on it now, my ute was parked where the caravan is now. 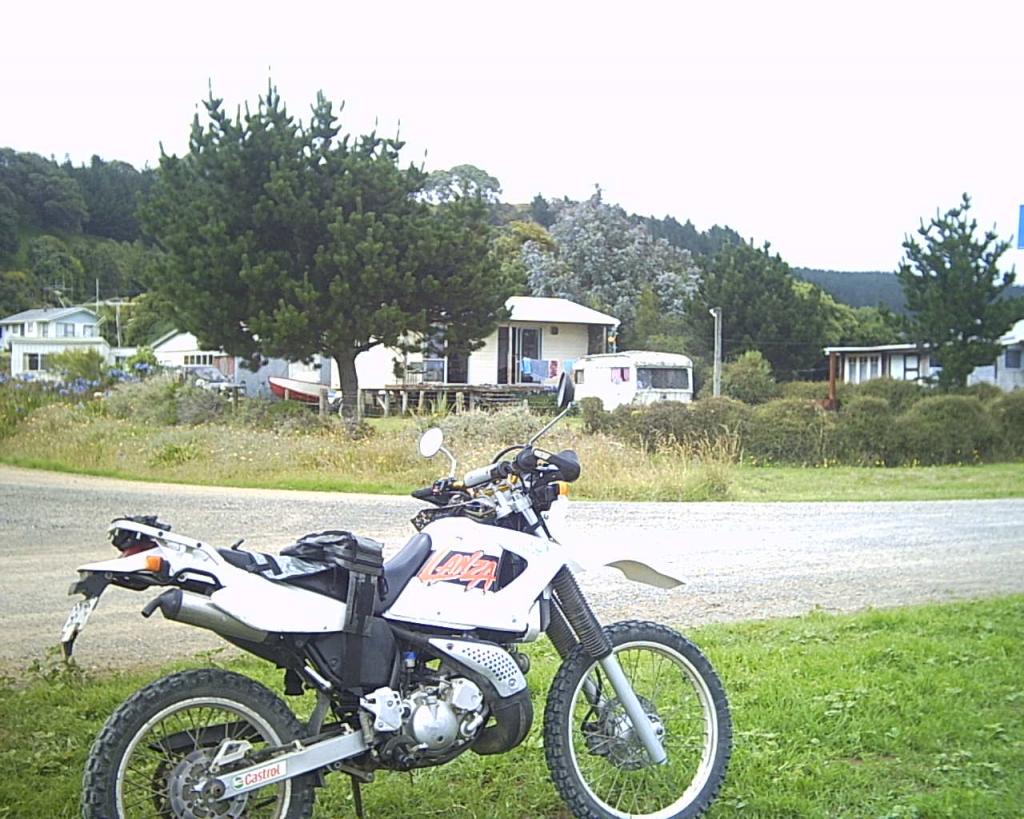 A few years later and the Airhead turned up here too. 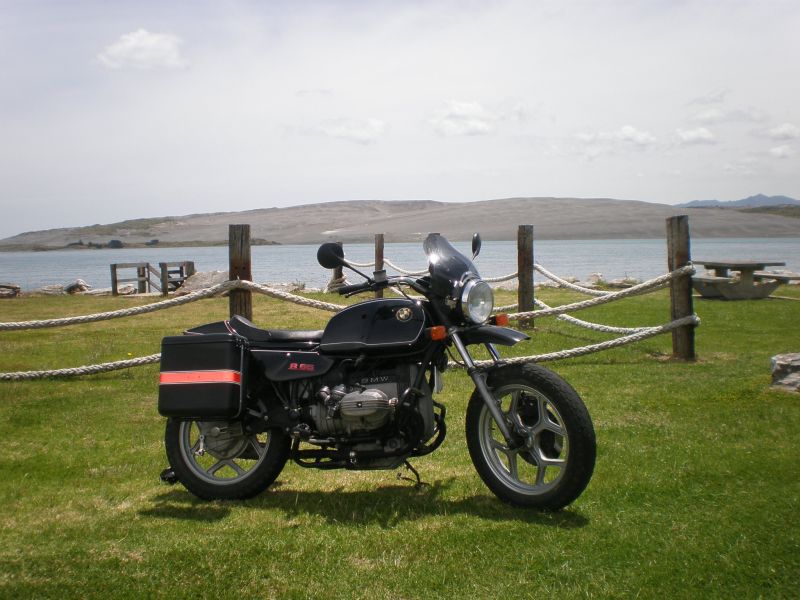 To the west of Auckland city are the Waitakere Ranges, to the east, the Hunua Ranges, both remnents of ancient volcanic activity, much older than the current Auckland volcanic field. Both are reserves and serve as catchment areas for Auckland's water supply. Several dams and lakes both sides. You used to be able to drive to the top of the dams...good gravel roads. The XLV750 at Mangatawhiri Dam. 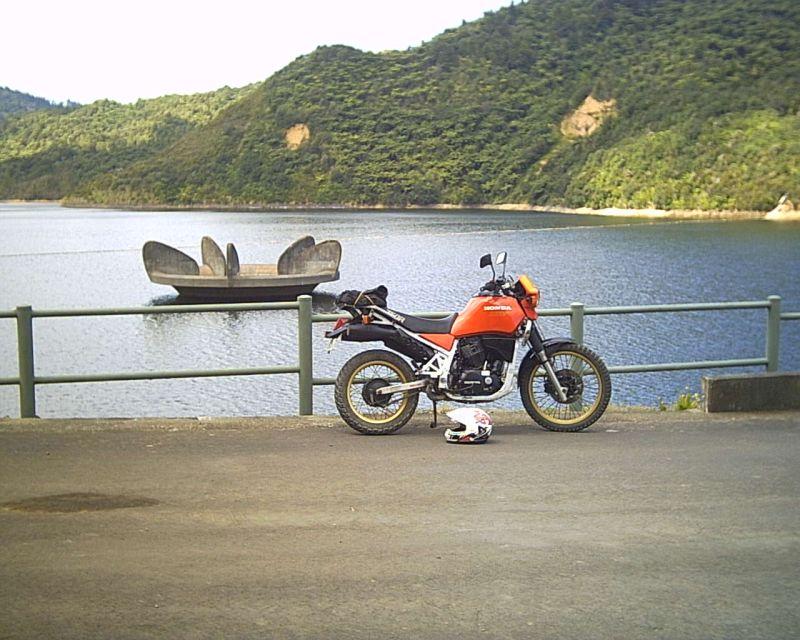 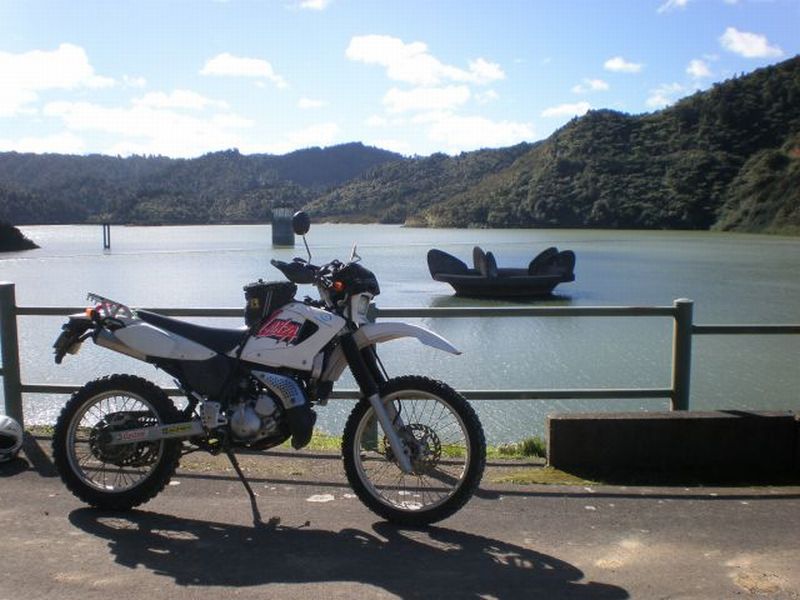 I don't have a photo of the XT600 there, although it was, so here is one from the lower Huia Resivour in the Waitakere Ranges. Can't show a BMW at the dams as they stopped road traffic getting to the top. 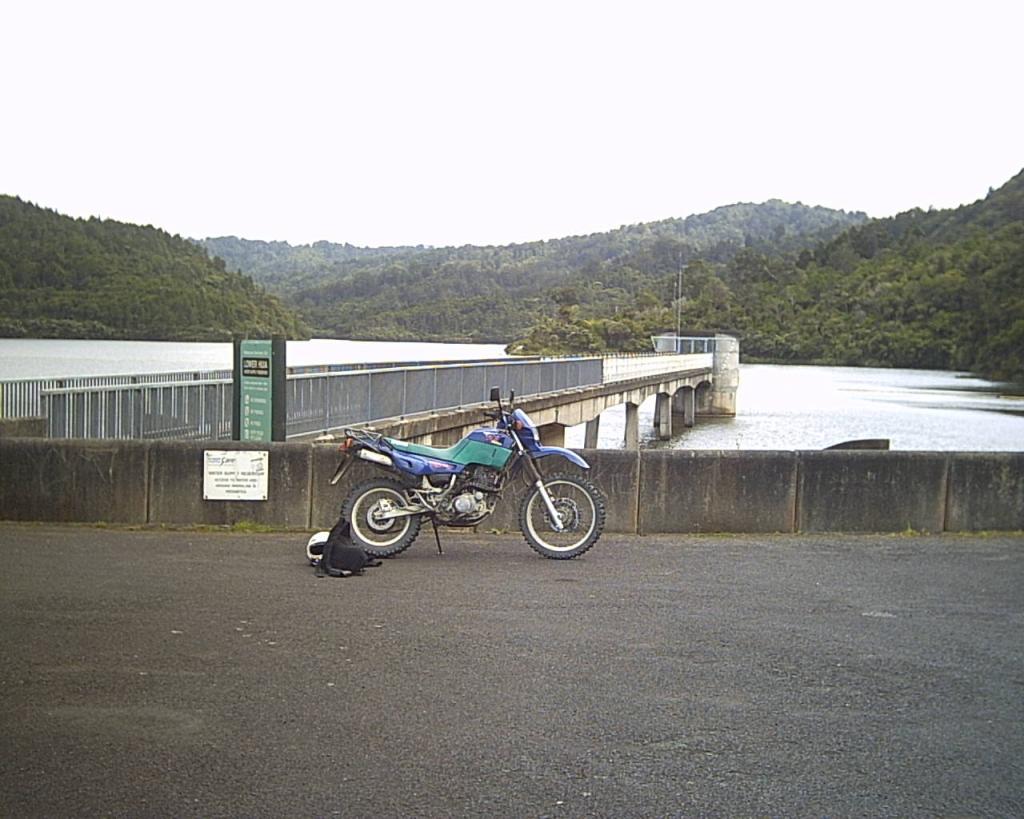 State Highway 43, these days called The Forgotten World Highway, travels through remote country in the North Island. After WWI returned servicemen were gifted land in there as a ''thank you'' for serving their country...gradually they walked off, the country is just too rugged to farm. The road climbs 4 saddles, one with a tunnel, and the rail line which follows the same route has 24 tunnels and 91 bridges...in about 150km. In 1977 I travelled the road for the first time in my A40 pickup with a girl who is now my wife. Back then a narrow gravel road, it's sealed now, but still a rugged road. The Moki tunnel sits on the top of the Tahora Saddle, the tunnel has been lowered since I first went through in 1977, to allow stock trucks to get through. There are a lot of tunnels in Taranaki, I think I've been through about 10, most are on real back roads. The XLV750 at the south end of the Moki Tunnel. 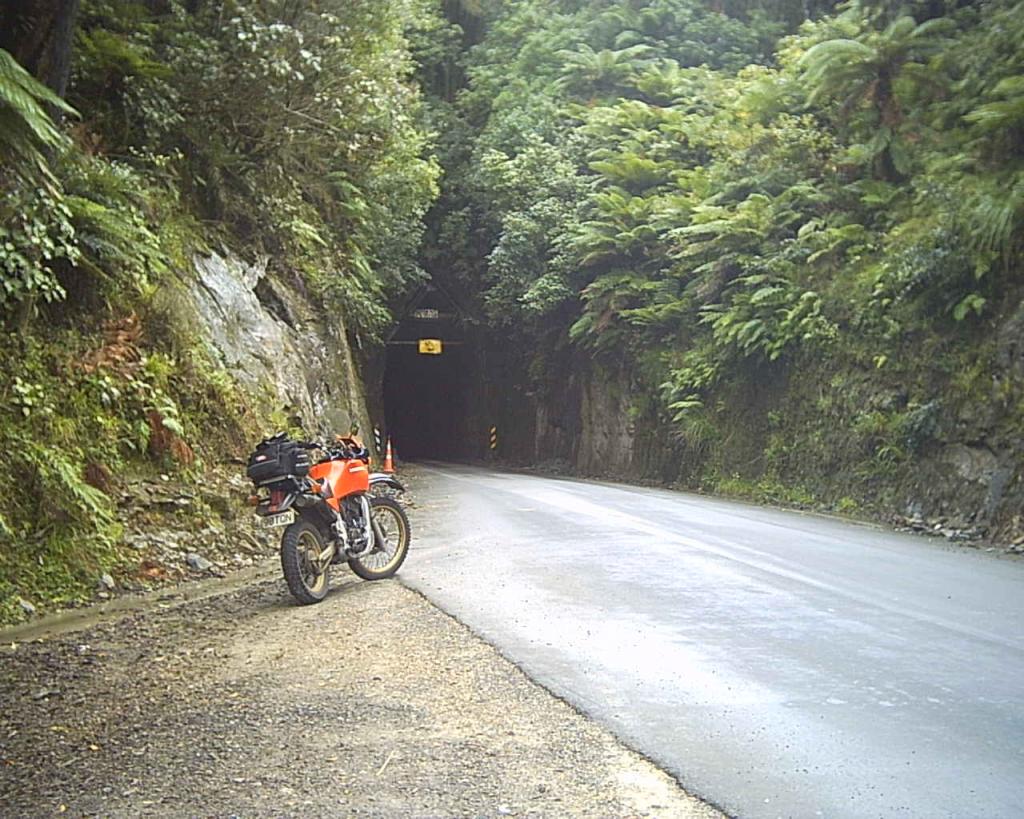 The XT400 on the north end. The grey rock is called Papa...nasty stuff. 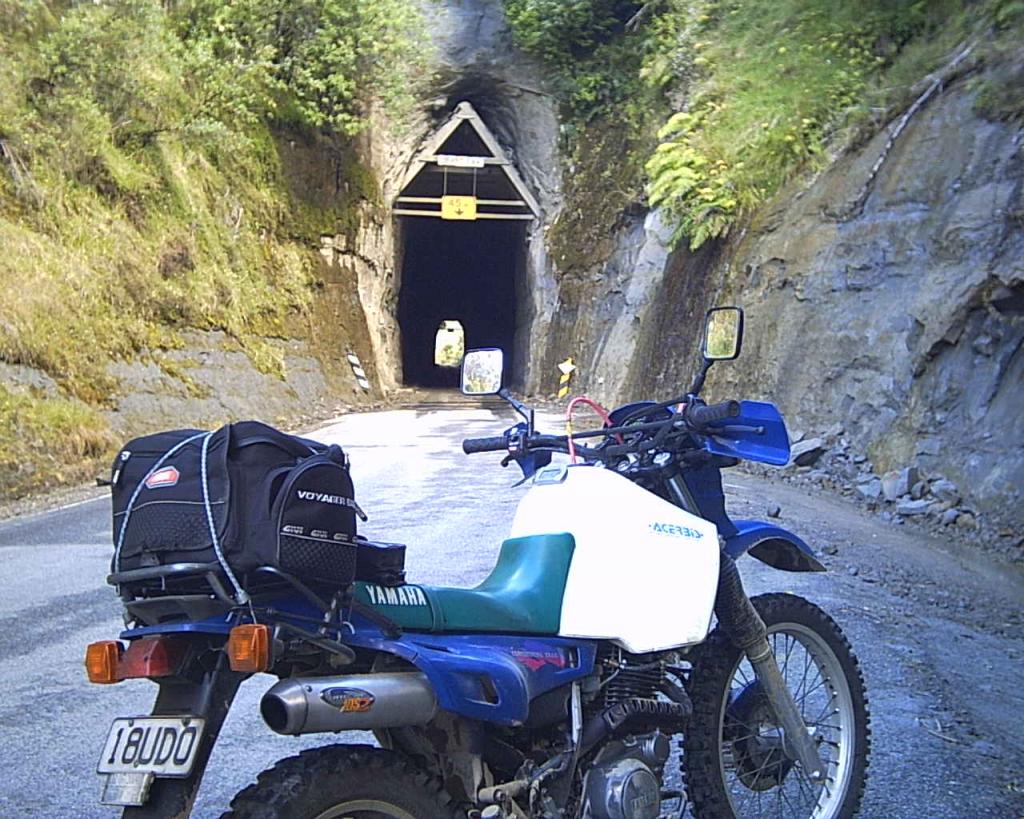 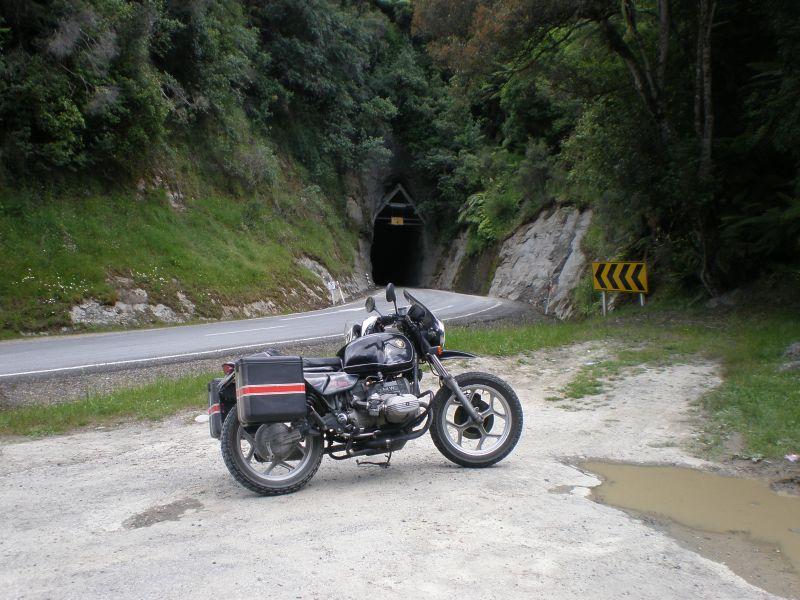 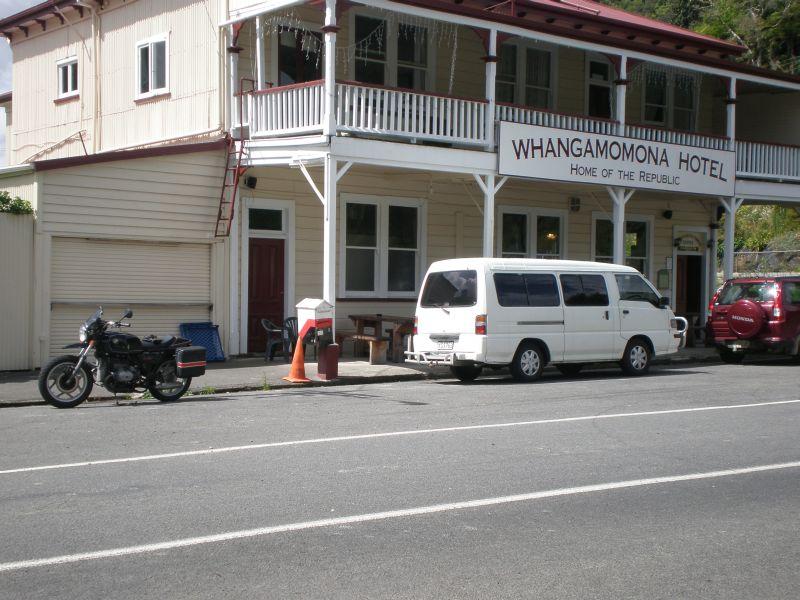 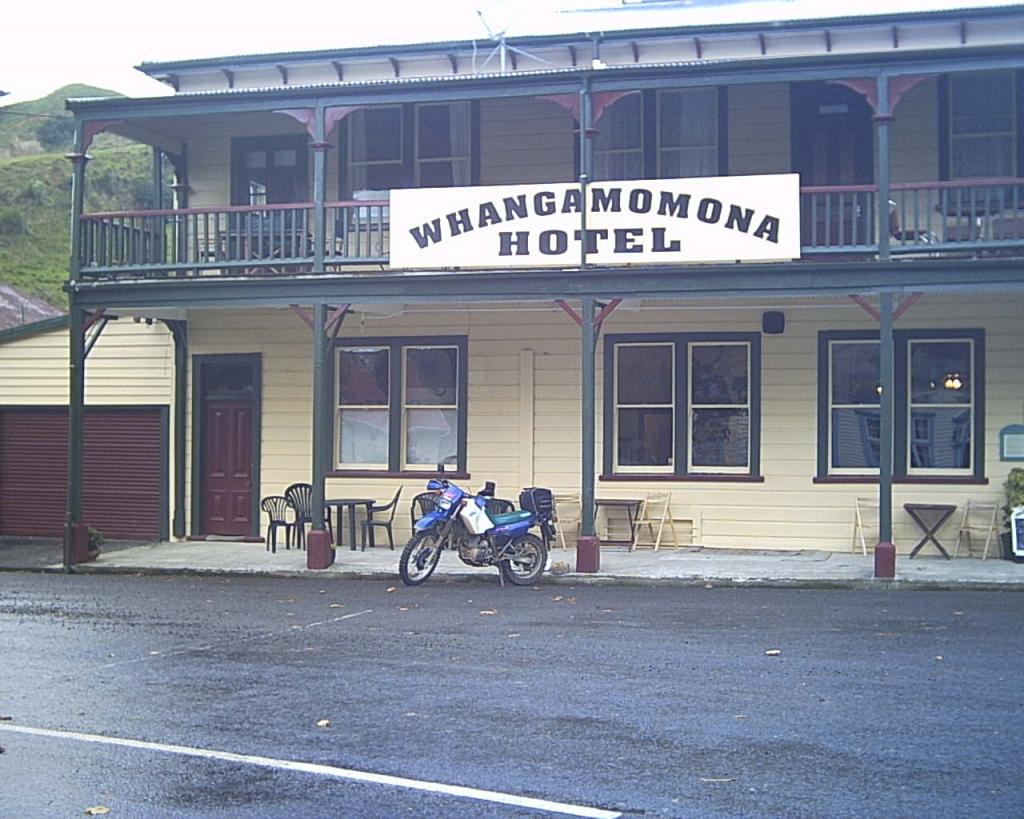 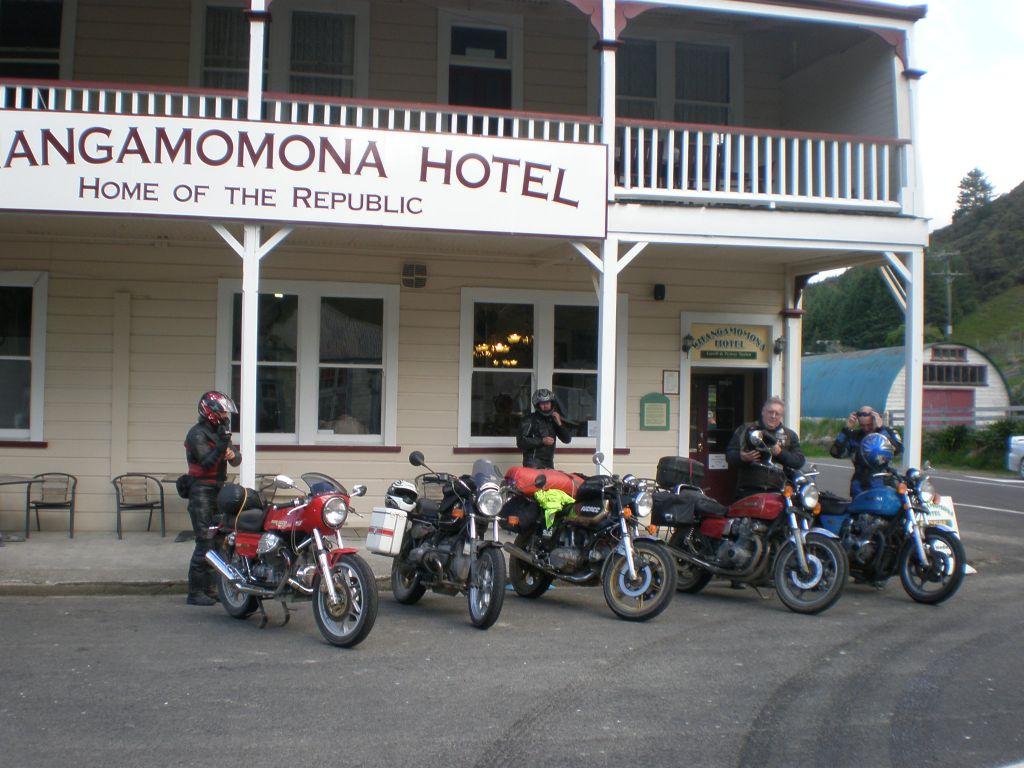 The rail closed a few years ago, and now they do tours with golf carts on the rails. What was a nice quiet area is now crowded with tourists...can't even get a park outside the pub anymore. I'll be down there in a few weeks, on the Airhead.
Last edited: Jan 16, 2017
You must log in or register to reply here.