I have done some searching and reading of what seemed to be pertinent discussions here. I am somewhat cowed by the knowledge of oil I see. So I am very hopeful that you will help me resolve my question. Which is:

I have recently acquired a 2001 Saab 9-5 2.3t with 4 spd automatic. I don't know what ATF is now in it. It is med - drk brown and I want t change it. Saab specified for this car Texaco dexron III and specifically said not to use synthetic. Other forums, specific to Saab, have not really provided the level of trust in their take on this issue, with advice coming down on both sides of the question.

I am probably over thinking this and am caught in my own loop, but my 17 yr old g-granddaughter is the "owner" of the car. I want to know with reasonable certainty what I put in is not going to deal a death blow, quickly or slowly, to the transmission.

What can I safely use from today's ATF market - considering the original specs, and that I don't know what is now in it? Thank you.

DEXRON-III is an obsolete license and has been superseded to DEXRON-VI. Any fluid with that license is the correct replacement. But a lot will work in that car including Valvoline Maxlife (what I use in my old cars) and Walmart Supertech ATF or any variety of DEXRON-VI that's on sale.

And ignore the synthetic "warning", nearly anything you purchase today is at least semi-synthetic.
Last edited: May 21, 2021
J

That transmission is an Aisin 50-42LE 4 speed that was also used in a lot Volvos of that same time period and those guys have been using Maxlife for ages.
S

Maxlife will work great in it.
Castrol Full Synthetic is another great choice.
Any Dexron VI will work fine. You can use synthetic with no problem.

Maxlife will work great in it.
Castrol Full Synthetic is another great choice.
Any Dexron VI will work fine. You can use synthetic with no problem.
Click to expand...

Also,
I used to own a 2002 Saab 9-3SE 5-speed. I would be just as concerned with the quality of the motor oil you are using with that engine as you are with the ATF.

I believe the turbo and the oil pan are really close to each other, hence, a ton of heat on the oil pan.

Were you planning on a drain and fill of the tranny or a fluid exchange?
K

Oils which can handle turbocharger heat is part of why I began reading here. dkryan is right.
So many Saabs my friends looked at had goosey flashing oil pressure lights due to globs of crud on the pick-up screen.
See if Saabnet is still around. It is a good source of info.

I used Mobil1 0W-40 European Formula. It's an ACEA A3, B3 oil. There are improved (better) specs out there today but the M1 0W-40 is available easily and cheaply at Walmart.

I used Maxlife in all the 5 and 4 speeds successfully. My TS (Total Stash) was over 15 gallons through the years....7 Saabs, 3 Volvos

One good thing to MAKE SURE OF is coolant. Dex-Cool was FF in that car. It's a red color. It's good stuff but mustn't contain any other coolants and it can only be used in an air-tight system. Odd gelling can happen with mixing.
FYI: Misuse (installation into non-airtight systems and contamination) and the bad aftermaths got the stupids to nickname it "Death-Cool".
Don't get involved with their foolishness. Dex is good stuff.
If your granddaughter's car has funky looking coolant I urge you to flush it out.
Our '02 Saab 9-5 Linear and '05 9-5 Aero had mixed coolants.
Also, the coolant bypass valve (heater control gizmo on the heater hoses) will, at some point, leak. It'll leak on the exhaust and if you're driving you'll think the car is on fire due to the smell. Locate one online and keep the order form handy.
Get a cable style hose clamp squeezer. It'll speed you up.

Saab or Wahler thermostats only. I have a coolant temp sender I could mail you.

See if the CAF has been changed. It gets overlooked. If it's factory you need to break away the plastic frame to get the filter AND huge, carbon pillow out of the airflow. It's not a difficult.
One of the Saabs was "dealership maintained" and it still had the original CAF. Lazy, dishonest slobs, that's all.

The cup holder is cool to look at but anyone who puts a drink against and above all those electronics is asking for trouble.

Those Saabs ran so well. Everyone who's owned one looks back and glows with warm, fast reminiscences.

I replaced all the long, underhood vacuum lines with blue silicone ones as it looks great.
CAREFUL when working the old stuff off as some nipples can break off. The turbo bypass vacuum control valve is a prime example. I fixed mine with PC-7 putty applied externally.

Your '02 might not have "PCV #6" update. It's a $100 collection of parts which reroute crankcase fumes. It includes a new drip box, hoses and filler neck. It's easy to do. I bought my kit from a guy who bought it and destroyed his car before installation so I got it cheap.
FYI: There's a small "L" shaped hose (5' X 6") back there (between engine and firewall) which just pops off occasionally. It'll stink your granddaughter out. You just shove it back on. You can do it by feel easily the first time.

This is the car which was my exposure to ADBVs which work. The ADBV would hold oil it the engine's upper regions. You'd have to unscrew the filter slowly to let the oil drip out in controlled manner.
SO MANY filters let the oil drain back into the pan it wasn't funny. It really showed me how bogus product claims can be. What else is new?
ACDelco filters ALWAYS held the oil back. Others did too but I failed to note them....sorry.

Ha, the oil pressure sender switch (FOR THE IDIOT LIGHT) is on the engine's backside. The starter blocks it. Undoing the turbo cooling lines (EZ fittings etc.) is necessary and an 18mm stubby ratcheting box is what you want for the starter's bolts. The switch is inexpensive (of course).

I put heavy duty Bilsteins (B6 or H6, I forget which name) on the Aero and it was the BEST. One day the car's shocks/struts just began making BIG grunting noises. Highly recommended.

I'm new to pictures. One is a water pump (you can reuse the chamber half).
The other is of the turbocharger's cooling lines.

I'm sure there's more in the dusty, desiccated corners of my brain but it's Jeopardy time. 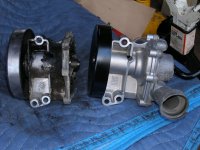 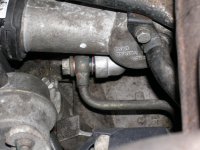 I use Castrol Dex/Merc in these and never had any trouble. Maybe Clinebarger will see this and chime in, he is the man you need to ask, he really is a transmission guru and a dam good one.
G

Thanks all. I knew this would be the place.
I'll use MaxLife with easy mind. I intend to do the drain and fill routine.

As to the motor oil, the problem with at least some of these engines (so I read) was sludge build up due to design issues at the oil pump pick up, hindering or stopping lubrication. I have no idea if the after market fix for that has been applied, don't believe there was a recall as Saab tried to blame owners for the issue. Saab did begin recommending synthetic oils to help address the issue. I don't know about the turbo/pan issue. Anyway, I'm using "full synthetic," though not Mobil 1. May do that next time. 5k miles/6 mos is my target interval for motor oil changes.

I have two cars (85 325e & 78 Spitfire 1500) with oil retention problems. I don't use synthetic in these because I read or heard sometime that they likely make worse any existing leak or use issues. They're on 3k/3mo interval.
You must log in or register to reply here.