If I still had my Dad I would get my cans together and take them to him and fill them up somewhere in Georgia so as not to get watered fuel. I know my Dad would have done the same for me. It's just a family thing that you will never regret.
G

I'm not a prepper but I've been caught without fuel during an outage so I try to have SOME on hand. You'll never have enough...and it's a PITA to keep stored fuel fresh.
I keep 20 gals around in this, but having fresh fuel in a vehicle that's designed to GO GET MORE... well it just makes a lot of sense to access it.

Recently repaired a botched job on a 2015 GMC Savanna Van that had all the Carpet Cleaning equipment transferred to it from a wreaked Van, But they didn't transfer the Filler Neck mounted Draw Straw from the wreaked van, By the time they realized they needed the Draw Straw....The Van had been scrapped. The correct draw straw in on back order from the very few companies that sell it.
They cut a hole in the filler neck hose & ran a 1/4" fuel hose down in the tank. This caused EVAP leak codes & the hose would collapse after @30 minutes of run time.
I installed a 1/4" Barbed Bulkhead Fitting in the top of the tank, Ran 1/4" ni-copp hard line into the van all the way to the fuel pump on the Kohler Command 25 engine.

Don't see why you couldn't do something similar.....But stub the hardline up behind the fuel cap door (With a cap to seal it when not in use)

Then you can either use a small 12vdc transfer pump with leads & clamps to reach the battery to fill the generators tank, Or install a Pulse Pump on the Generator where you don't have to transfer fuel at all. 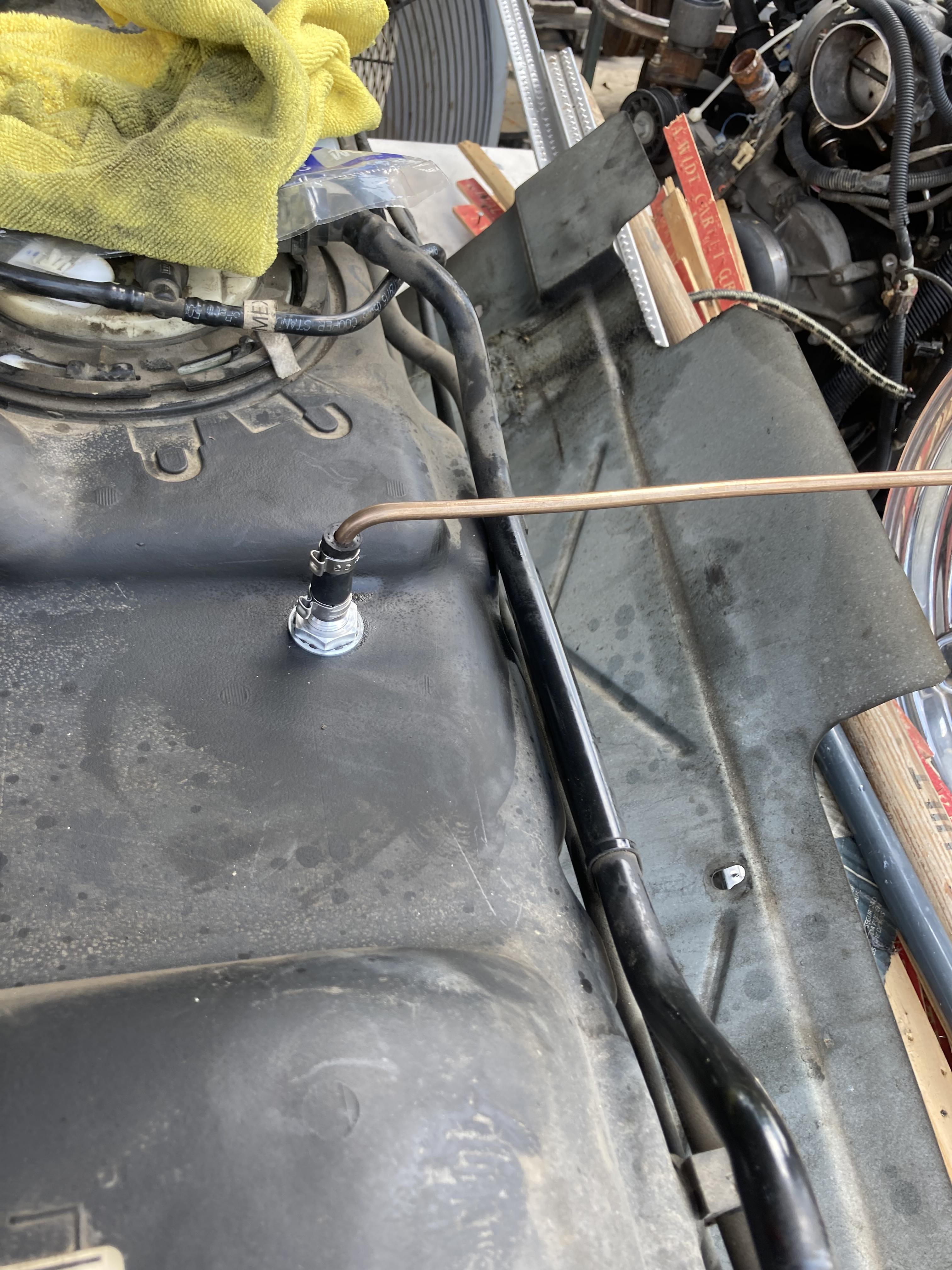 I live on the SW Florida coast. The eye went right over me. Had 30 minutes of calm before the terror started again.

I bought 50 gallons of gas before the storm and felt silly for doing so. Now… I dont feel so silly. A week later and the gas stations STILL don’t have gas or if they do, lines are 4 hours long.

The best option is to drive an hour north or south out of the hurricane impact zone and those gas stations are open with no lines. Grab a meal at an open restaurant, fill your gas cans, enjoy the normalcy because it is anything but normal here.

I am a prepper and felt pretty prepared. Generators, radios, flashlights, gas, food and water. We did well. Only problem is the food went faster than we thought it would because we had power and all the friends didn’t so we’ve basically had a large pool party at my house every night and grilled hotdogs/hamburgers/chicken for 15-20 people every night since it began.
V

atikovi said:
He ain't getting a hose down past the roll-over valve.
Click to expand...

Still unlikely to get you past the rollover valve - unless I am doing something wrong. I have tried everything - down to 3/16 inch fuel line. I store gas for my generator but would really like to find an easier way to tap my vehicles, because then I could just keep all my cars full and not have to cycle gas in cans.
W

RooflessVW said:
Hanstringing your functioning transportation to remain in a situation where you need to run a generator for power is idiotic.

Get in the car and drive to where there is power.

Don't need critical thinking when there is a Tv to tell me what to do!

wrcsixeight said:
He got power/internet/cable back, an hour ago.
Easier now to amuse the wife, who is suffering dementia.

Were gonna install a propane / 3 fuel conversion kit for the generator over the holidays.
Click to expand...

Not for nothing especially with the large propane tank as you mention why not consider a hardwired whole home unit?

He basically has to do absolutely nothing if the power goes out. Just wait 30 secs and bam, full power. I am sure cost is an issue but it's worth looking into and it today's housing market definitely will add value to the home.

Also yes before you say it, he'll dismiss and say his smaller generator is perfectly fine I know.
Last edited: Oct 4, 2022
B

So if I was looking into trying to run an aerosol thru-rail injector cleaner like Berymans Thru-Rail (1120) or Napa Pro-Cleen (2-18489) on my GM vehicle all I need is just an R12 can tap and hose and I should be able to run it straight into the fuel rail without the need for any additional adapters, I was looking this weekend for a setup to use one of those cleaners without having to buy a $500 professional kit, I could only find one video where some guy used that, but he just the original fitting off the end of the r12 hose and ran it in a barb into a ball valve then another hose out of the ball valve but apparently the hose he used wouldn't engage the schrader valve so he removed the valve core from the service port, which is something I wouldn't want to do.
B

blufeb95 said:
So if I was looking into trying to run an aerosol thru-rail injector cleaner like Berymans Thru-Rail (1120) or Napa Pro-Cleen (2-18489) on my GM vehicle all I need is just an R12 can tap and hose and I should be able to run it straight into the fuel rail without the need for any additional adapters
Click to expand...

SC Maintenance said:
Still unlikely to get you past the rollover valve - unless I am doing something wrong. I have tried everything - down to 3/16 inch fuel line. I store gas for my generator but would really like to find an easier way to tap my vehicles, because then I could just keep all my cars full and not have to cycle gas in cans.
Click to expand...

What are the vehicle models?

Vern_in_IL said:
What are the vehicle models?
Click to expand...

The ones I would like to access are my Nissan's 2008 Xterra and 2011 Frontier. There a little different but similar. In an emergency I can access the fill hose at the tank pretty easily - it enters from the side - highlights below are mine - so one hose clamp and I am in. I need to purchase a fuel transfer pump. I have tried a bunch of different hoses from the actual fill end but its a hose with a hose and lots of bends - so no luck so far.

Also been meaning to pull a fuel rail from the junkyard so I can harvest the proper connector fitting - and I could simply attach to the fuel hose and use the truck's fuel pump.

I've been playing around with the "gas tapper" idea. I bought an inline electric fuel pump of eBay for $25, 6 feet of 1/2" and 1/4" poly tubing, and a small funnel. Got maybe $40 into this plus some wire and hose barbs I had on hand.
It does work. Kinda slow but that's not a surprise when your sucking fuel thru 4' of tiny tubing.

I tried & tried but just couldn't feed the suction tube past the rollover valve in my Traverse, but it slid right by that valve in my Durango.

Using 4 feet off 1/2" tubing on BOTH the inlet and outlet sides of the pump for the purpose of testing, I got 1gpm flow.
Switching to the small 1/4“ inlet tube, through an even smaller hose barb, the flow dropped to 3 minutes to transfer 1 gallon. It would take an hour to fill my 20gal gas caddy. That's pretty slow but I suppose in an emergency it's acceptable.

There are faster fuel pumps available but they cost more. There are much slower ones too so you really need to check specs if you're going to DIY something like this.
G

I still need to explore getting the gas via the fuel test port + jumpered fuel relay to see if it's any quicker or easier.
G

My version of a 'gas tapper' kit.
I cobbled on a power switch so I don't overfill a container while I juggle the hoses & power connection.

Jun 2, 2022
TeamZero
J
Does anyone know the fuel consumption per hour when idling a 2016 Honda 2.4 Liter Earth Dreams engine?
2

The real cost of wind and solar: Why rates don't match the claims
4 5 6