A day in Newport, IN at the Newport Antique Auto Hill Climb.

First of all... some background on the Newport Indiana Hill Climb.

Unfortunately, the weather wasn't optimal. A wet track at times limited what the cars could do. Practice runs began at 8am local time. I arrived at the start line at 8:45am, only to find nothing happening. There had just been an accident at the top of the hill, and runs had been stopped. Around an hour later, practice runs resumed. Only for it to then start raining around 10:30am, but runs continued. For some of vehicles, a wet track created lots of wheel spin and times suffered.

Finally, around 11:45am, the rain became too much, and they closed the hill 15 minutes early for an already scheduled one hour lunch break from 12-1pm. One of the local Churches was hosting a Chicken and Noodle Dinner (likely Indiana's #1 comfort food) in the basement of the courthouse on the square. That's where many people went to get out of the cold rain... a hot meal in a warm and dry building. I found myself eating at a table, surrounded by Hill Climb drivers.

The hill was opened back up at 1pm, and runs continued until I started back to the truck at 4:15pm. Practice runs were delayed by a loose dog on the hill, along with a few vehicles that stalled out towards the top. Practice runs were scheduled to end at 4:30pm anyway, and another round of rain was quickly rolling in. After a 10 minute walk to my truck, I found the exits from the parking lot to be around 6 inches deep in mud. Not the best day to drive the truck that wasn't a 4x4. Oh well. I put 800 miles on the 4x4 last weekend, and wasn't in the mood to add to that number this weekend. However, I did stop at the Covered Bridge Restaurant in Eugene, Indiana for an early supper, for even more Indiana comfort food... and a piece of homemade Peach pie to go.

The highlight of the day was a 1911 Brush one-cylinder car, taking on the hill. I was too busy watching to get any pictures. There were also many early speedster cars as well, most of them being Ford Model T's. Since this was Indiana, there were also many Studebakers, Cords, and Auburns there as well.

A lot of the fun here is that the vast majority of these are not over-restored museum quality cars, these are cars that are driven. Cars that can be rained on. One Studebaker in the competition wasn't even a barn find, it was a shade tree find. It looked like it had been sitting under a shade tree for about 10 years. It had green algae and black mildew all over it.

There was also a car show, but the number of vehicles that showed up was limited by the weather. I was planning on taking the '52 over for the car show, but the weather just prohibited it. I had zero desire to drive it that far, in the rain, without a chase vehicle... for a car show that I wasn't even sure would take place due to the rain.

I thought that I had taken more photos and videos, but I hadn't taken any while it was raining... so that limited what I did take. Attendance was a small fraction of what it usually is... due to the cold and rainy weather, and likely due to continuing China virus concerns. Lots of hidden gems across our great country. Thanks for sharing!
Last edited: Oct 3, 2021

Videos won’t work for me.

During lunch, I sat across the table from the owner of the fire truck in picture #2. His Dad (a fireman) and a fireman buddy of his, bought it from a fire department in 1970, just as it was being retired from service. He said it came from near Keokuk, Iowa. They pulled out the water tank, and put in benches in the back. Lots of use in parades, and lots of helping with Santa.

He got involved in the ownership of the truck when he bought out the buddy, and became 50/50 owners with his Dad. As time went on, his Dad wanted to hot rod it. He didn't want to, as it was too good of an original to do that to. Eventually, his Dad gave up and handed him the title and told him it was all his. He's had it for 25 years, and did one repaint on it.

He brought it in, just to run the hill... a bucket list thing.... not to compete.

In case you were wondering, they set up the competition to keep the entire day from being nothing more than 55-56-57 Chevy's running the hill. The newest possible vehicle that can qualify is a 1955, AND it has to be from a defunct manufacturer (e.g. Studebaker, Hudson), that ceased production prior to 1970. Vehicles from current manufacturers are allowed, but they have to be pre-WW2.

Thanks for sharing. So the black pickup truck behind the Packard is either a Studebaker or a Hudson ?
C

RhondaHonda said:
Videos won’t work for me.
Click to expand...

OK... let me work on the videos. I posted that all at 3am, so I was bound to mess something up. 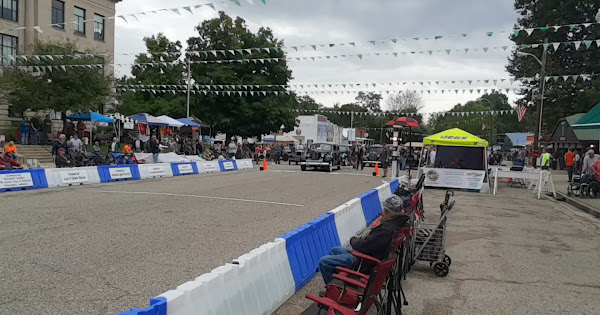 andyd said:
Thanks for sharing. So the black pickup truck behind the Packard is either a Studebaker or a Hudson ?
Click to expand...

It had to been a Studebaker pickup. I recall only one or two Hudsons, and neither was a pickup. The only Hudson pickups that I've seen were up at Auburn, Indiana at the Sotheby's Labor Day weekend auction.
You must log in or register to reply here.

Jul 28, 2022
TiGeo
J
The quality of mechanics that work on your vehicles and the quality of their work is a crapshoot now days.
2 3 4