A bizarre lesson to learn on Hyundais.

I learned a lesson the hard way this weekend. I was working on a 2013 Elantra. Very intermittent no-start condition. I noticed the positive battery terminal had a chewed up shim. I also noticed the terminal was warped, which I quickly discovered was from a previous owner's amp cable. This has been a difficult diagnosis over several weeks, so the customer agreed to a new OEM terminal (due to the strange setup of the positive connector) in order to eliminate the shim...and the variable. I had to order the part, so as a temporary measure, I used a new shim from Hyundai with the old terminal. This is what the terminal looks like (ignore the red outline): Here is a picture of the terminal isolated from the rest of the unit: The circumference of the inside of the terminal loop is self-tightening. When the nut pictured above is tightened, it also pulls that 'claw' piece that runs perpendicular to the terminal toward the nut, which shrinks the circumference and tightens the terminal to the post. I was hoping that the combination of a new battery and new battery terminal would fit perfectly together. Nope! The Hyundai positive battery terminal for these Elantras (Hyun/KIA part number 91980 3X010) are larger than the post by the tiniest measure, just enough to aggravate you and spin around the post. Also beware, that particular Hyun/KIA part number actually retrieves two completely different terminals. They got the correct one the second time around. No this was not counter guy malfunction, and yes I gave the VIN both times.

Long story short, I spent two hours trying to get the new terminal to work, removing, replacing, both a second time (there are about nine steps to get the terminal disconnected from the unit, then the same nine in reverse to reconnect), even installing the same terminal to another battery of the same size (different brand)...all to come to an aggravating conclusion. A shim is absolutely necessary. That also means the old terminal is perfectly capable of a secure connection with a proper shim (which I now have to get again, because after so much removing and replacing it's now sabotaged).

So 6 total hours of wasted time: four trips to the dealer (30 minutes one-way), plus two hours of frustration installing it. All to end up reverting to the imperfect parts and earning zero money. After all, why should the customer pay for what he already had?

I hate shims, but in this case they're the lesser of two evils. Hopefully this helps someone contemplating buying a new terminal or already in-progress and frustrated.
M

Sounds very irritating, thank you for the detailed write up on your findings though.
B

i would guess many things are designed to be a PITA + make $$$$, also deter DIYers!!
S 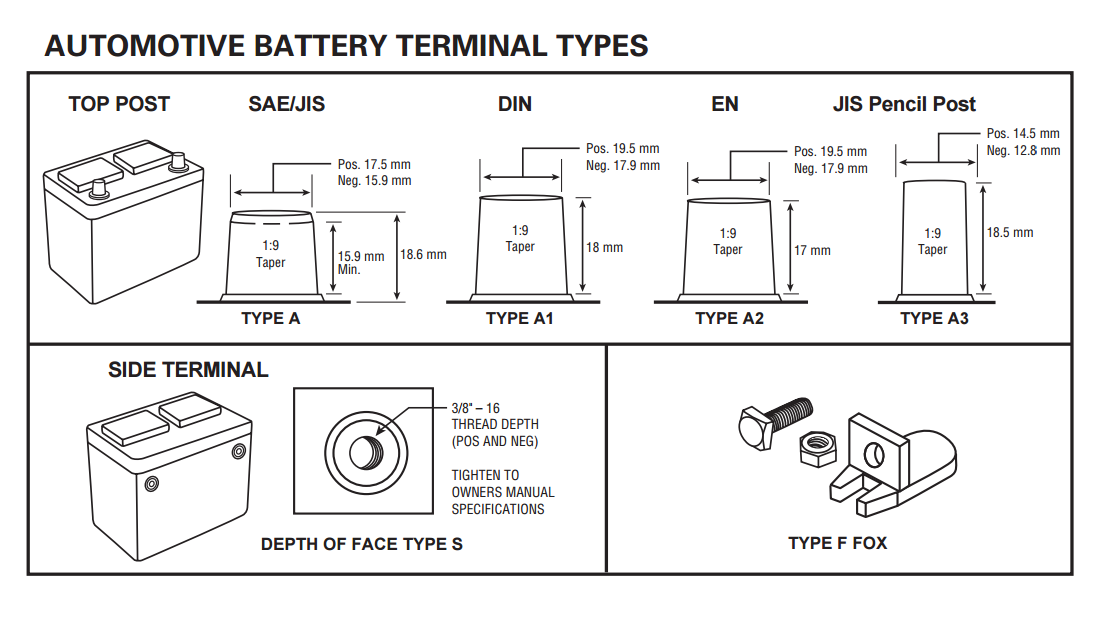 For some writing I'm doing, I'm trying to clarify the standardization, or lack thereof, of battery posts. Traditional top posts are usually referred to as SAE posts. There's an SAE spec for this, published and apparently unambiguous, calling for a 1:9 taper, and a top post size of 17.5mm (positiv...

Not unique to Hyundai. Too bad the OP did not post dimensions of battery posts. They do vary.
Last edited: Jan 25, 2021

Good to know in case I ever have to deal with one.
J

I often get these in the workshop where someone changed a battery but didn't slide the terminals down enough on the posts.
M

Yes if that plastic cage combined with the shape of the top of the battery won't let the terminal go all the way down it's not going to tighten properly.
T

What brand of battery? I have found small battery posts on many Johnson Controls/Clarios batteries over the years on asian vehicles.
M

Timmastertech said:
What brand of battery? I have found small battery posts on many Johnson Controls/Clarios batteries over the years on asian vehicles.
Click to expand...

That is the exact problem that I had with the Walmart EverStart Max (JCI) on my 2013 KIA Optima. Why the Motorcraft 124R battery had slightly larger posts is anyone’s guess. According to the drawing above, the DIN posts are slightly larger. I would assume that the OEM battery comes with the DIN posts.

Interesting, just replaced batts in both cars - 124R and H5, bought both at Costco, zero issues with installing them.
J

We had the same problem on my wife's 2010 Elantra. It caused a number of interesting electrical problems before turning into a no start.

The OE battery had been replaced with a Johnson Controls (now Clarios) Hyundai branded battery from the dealer. No matter what you weren't getting that terminal tight without a shim. That battery died an early death, possibly from being undercharged or maybe just bad luck. It happens.

The replacement was a East Penn made battery from NAPA and the OE terminals fit fine without a shim. It may have more to do with the tolerance that happens in any manufacturing than any significant difference between manufacturers but I found it funny that the aftermarket battery fits better than one form the dealer in our case.

I'm guessing the real issue is due to differences in battery specs between countries, but you would think they would accommodate for that in the 121R and 124R sizes that are common in Hyundai/Kia and not much else.
B

a good day as i learned something new!! now if i could figure how to send the pics in my new to me sony android phone!!

I've changed the battery once on the SFS 2.0T with a Walmart Everlast Maxx. It's lasted 4 years and was pretty straight forward in application. I'll save this information when i need to do it again in either car. Thanks OP.
You must log in or register to reply here.

Time for upgrades and maintenance for the Elantra! + Questions