So, I had quite the excitement today. I'm a department head at work, and I go into work today, start reviewing yesterday's production records and catching up on emails, and out of the blue, BOOM! Then a split second later, my office is flooding from above like steerage class on the Titanic. [censored]?!? So I run around the corner to my department, and there is literally 6+" of water covering the entire workspace which is roughly 30'x40' and water is POURING out into the plant from both sides of the work area. I peek my head towards the back where I see the water coming from, and it looks like a torpedo strike on an aircraft carrier belowdecks; maintenance guys are running around like headless chickens. I've got a couple half-million dollar pieces of equipment in my lab, and chairs, floormats, garbage cans are all making their own exits out the open doors. I walk over to the office next to mine, which has one of the rubber sound strips on the bottom, and push the door open to my coworker's office- there erupts a tidal wave out the opening door and there is around 14" of standing water plus more rapidly accumulating in his 12'x12' office. Walk back to lab, maintenance has finally figured out that an 8" fire riser coupling has decided to divorce itself, but they don't know why. Meanwhile, the tide is rising. 60% of the ceiling tiles are now making their way after the garbage cans and floor mats, one of my pieces of test equipment is directly in the path of this gushing fire riser, light fixtures have been knocked from the overhead and the exposed wires are flapping in the deluge. Lights in this area have gone out, and I realize both my feet have a feeling like you get when you stick a fresh 9V battery on the tip of your tongue... not good! So I chase everyone outside of the tsunami and its ever-spreading infringement on production areas. Guess what? The majority of this area sits on a slab and, like magic, the lowest point is outside my lab where there is no drain. It's spreading to the maintenance areas, and is now across nearly a third of the production floor (which is 120k square feet BTW) by the time maintenance has figured out the root cause and has taken action by shutting off the jockey pumps and the emergency diesel pumps. Well, in my industry, one of the PMs is quarterly fire system "live" tests in the manufacturing area to validate proper fire system operation for insurance and safety purposes. The guy running the test told the maintenance supervisor he was ready to start the test, the maintenance guy said "OK, wait until I get back, I have to disable the diesel pump so it doesn't come online when the pressure drops for your live test". Needless to say, the guy running the test didn't wait for the supervisor to return. They activated the fire suppression system with the jockey pumps already on, so the system was already primed to 120psi, and when the suppression system was activated, the diesel pump kicked in. It was about that time the BOOM happened in my office, as the water hammer from the pressure spike found a weak compression fitting and blew the pipe apart, starting the deluge. In the aftermath, about 15 minutes later, I was able to see the pressure had pushed the downstream side of the pipe to the side by nearly 3' (there was a 90* down elbow nearby that rotated when it blew) and bent all the associated hangers for that pipe as it swung. It's been many, many years since I did the math in the Navy calculating flow rates in GPM based on pipe sizes, but from the sheer volume of water that went through the lab and out into the plant I'd estimate it was easily 35-40,000 gallons, or somebody's in-ground pool. Lo and behold, other than the light that was located directly under the busted pipe and all of the missing ceiling tiles and associated flotsam that washed out, ALL of my equipment emerged unscathed! It was a Monday miracle, something entirely unexpected based on the buffoonery that led to this incident. So, while there was definitely some carnage, I was immediately drawn to think of Isaiah 43:2. It truly was a blessing that nobody got electrocuted (there are two 480V, 15kW water heaters right where the water came in as well), and that none of the equipment was ruined. And that was the first 35 minutes of my Monday morning!

Wow, that's quite the epic!
K

Hopefully the idiot that caused this got fired.

Dramatic. Had one of those go just after I'd started as a network engineer for Royal Bank of Jockland Treasury Dealing rooms. Flooding was mostly contained to the building riser but it took the power out. My supervisor went over to bring the Contingency Dealing Room online, so I had the job of bringing the network back up when power was restored. I was still fairly clueless, so I followed the procedures in the manual, which turned out to have been written by someone who didn't have a lot of big ego dealers losing big money shouting at him, and was unecessarily slow. Lost some gear, probably due to spikes as the power was interrupted (everything was off when it was restored, which took a couple of goes) and had to do a bit of emergency reconfiguration. I re-wrote some less anal procedures later when I'd acquired some clue.
Last edited: Apr 30, 2018
G 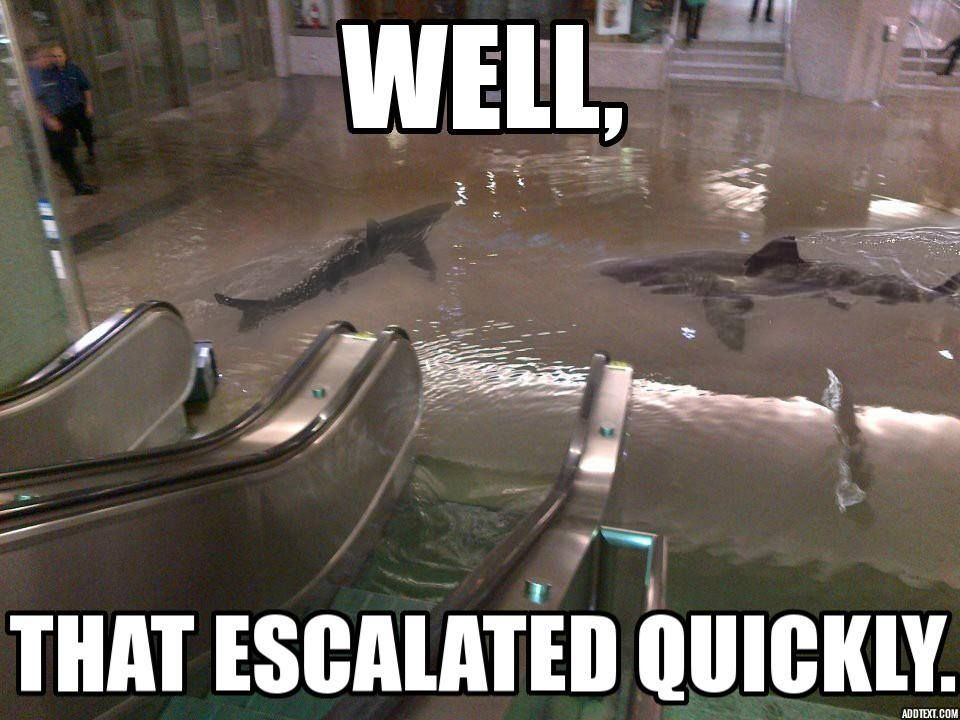 Maintenance is ripping out all of the ceiling tiles and other "soft" materials. Thankfully, the walls are cinder block with the white shower-stall plastic sheeting. A couple spray bottles mixed up with 10% bleach should kill anything left on the hard surfaces.
P

Reads like a screenplay, I had the feeling of both Chernobyl and Fukushima nuclear disasters the whole way through with the botched test and flooding. Glad it wasn't as detrimental as it could have been and equipment was not wasted.

That was a heck of a Monday! WOW! We've had some city water system breeches at the plant over the years, but most of our water woes stem from our river water cooling system. Our pumps circulate about 32000gpm at ~70psig at the pump(s) discharge. I've been soaked many times helping repair leaks associated with it.
P

Ah hah, Murphy is alive and well. I understand that an outside contractor has been brought in to run the test on the fire system. I would expect that any company involved with safety equipment would be liable for damage done by negligence. Time for your company's legal department to get involved.
You must log in or register to reply here.

Another issue with apartment complex
2

The hits keep coming for TEPCO
2