Originally Posted by RDY4WAR
Is there a white paper on this? I'm bored and need something to read.
https://www.swri.org/sites/default/files/sequence-iva-test.pdf Seems none of the specific types of engines used in the many tests I've seen actually spec xw20 oils, yet they run the tests with 0w16, 0w20, 5w20 oils.
B

Originally Posted by oil_film_movies
The Sequence IVA, part of SN, is run on a '94 Nissan KA24E 4 cylinder spec'ed for 5w30. 0w20 and 5w20 oils qualify on this engine. Other tests run Buick V6's and other engines meant to run a 30 weight too.
There we go ^^^^^^^^^ And given it's a naturally aspirated motor, non GDI, no turbo boosted motor, not being driven hard on a track... And driven by a nice older man... The 5w20 is just fine.

Originally Posted by oil_film_movies
Originally Posted by RDY4WAR
Is there a white paper on this? I'm bored and need something to read.
https://www.swri.org/sites/default/files/sequence-iva-test.pdf Seems none of the specific types of engines used in the many tests I've seen actually spec xw20 oils, yet they run the tests with 0w16, 0w20, 5w20 oils.
I already have that one.

I was wondering if there's one with results. 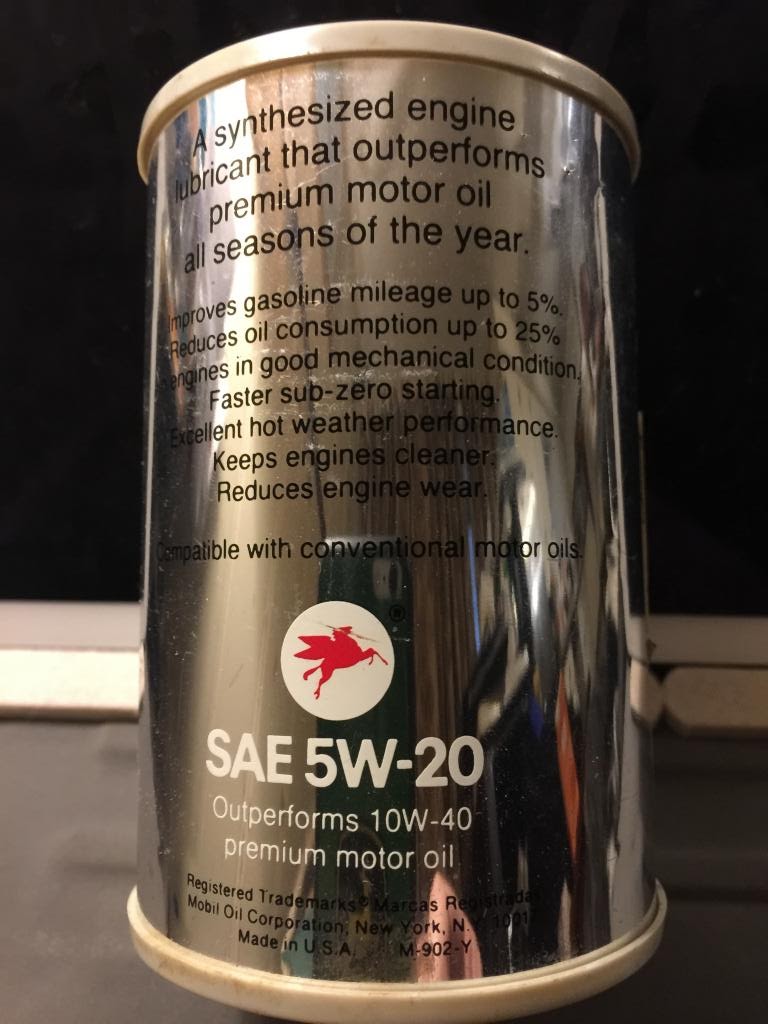 Dang, a $3 bottle of STP would be a real cheap and easy way to end the lingering doubt.

Originally Posted by gfh77665
Dang, a $3 bottle of STP would be a real cheap and easy way to end the lingering doubt.
I'd honestly dump the oil before I'd put that bottle of wax in there.
C

(Image courtesy of 4WD) In the past, they advertised the virtually VII-less 5W-20 as being thicker than a premium conventional 10W-40 loaded with VII. It looks like not much has changed today: M1 vanilla 5W-20: HTHSV = 2.75 Base-oil viscosity = 1.91 VII content = 4.2% M1 vanilla 5W-30: HTHSV = 3.1 Base-oil viscosity = 1.77 VII content = 7.8% M1 EP 0W-20 (PAO-based): HTHSV = 2.7 Base-oil viscosity = 1.92 VII content = 3.8% So, among the three M1 oils, the PAO-based M1 EP 0W-20 has the thickest base oil and least viscosity-index improver (VII). That's the power of the the high-viscosity-index PAO base oil. M1 5W-30 is the worst among the three as far as the base-oil viscosity and VII content is concerned. The base-oil viscosity is probably more important than the HTHSV in TGDI engines or engines with fuel-dilution problems. For example, see this Nissan paper on timing-chain wear. They compared a 0W-16 (HTHSV = 2.3 cP) to a 0W-20 (HTHSV = 2.6 cP) and found out that the timing-chain wear is controlled by the base-oil viscosity, not the HTHSV: Development of low-viscosity API SN 0W-16 fuel-saving engine oil considering chain-wear performance (Nissan study) Excerpt: "Second, it was found that the base oil viscosity and molybdenum dithiocarbamate (MoDTC) had a significant effect on chain wear in rig testing that simulated silent chain wear. For the same base oil viscosity, the new oil maintains the same oil film thickness under high surface pressure." PPPP 5W-30: HTHSV = 3.1 Base-oil viscosity = 2.47 VII content = 2.3% That's the power of GTL used wisely. The same doesn't hold for the Pennzoil Ultra Platinum (PUPPP). PYB 5W-30: HTHSV = 3.0 Base-oil viscosity = 1.82 VII content = 6.5% The conventional Pennzoil 5W-30 outperforms the synthetic M1 5W-30 in base-oil viscosity and VII. Estimated base-oil dynamic viscosit... improver (VII) content of selected oils So, M1 5W-20 is fine unless your car really cares about the 10% higher HTHSV of M1 5W-30. It very likely doesn't. If you need a thicker oil, go with the PPPP 5W-30. If you need something even thicker, go with an ACEA C3 5W-30 or something even thicker. Otherwise, there is no reason to worry.
^^^^^^^^^^^^ This validates in my mind what tig1 has stated. Many times in fact.. And that the need for new standard testing for viscosity came about. SAE J300... His old school Mobil 1 was likely a legitimate 5w30... And performed great in his vehicles. Due to what gokhan makes clear here too.
K Originally Posted by RDY4WAR
Originally Posted by gfh77665
Dang, a $3 bottle of STP would be a real cheap and easy way to end the lingering doubt.
I'd honestly dump the oil before I'd put that bottle of wax in there.
I does not bother me at all if you want to waste perfectly good oil. Knock yourself out.

And yes I know John Force is up there in his age... He is still doing pretty well in NHRA. I'm glad he survived that terrible accident just a couple of years ago... That was scary when I saw it happen.
A

He put it through a pretty good test yesterday. He drove the car 330 miles round trip to North Carolina. He said it didn't miss a lick and drove fine. Sustained 65-70 mph down the highway so it definitely got to tempature and stayed there a long time. He's not worried about it so neither am I.
D

We're gonna see how well this stuff does in a qr25, although mines an 09 and Midwest winter is coming. I cleaned out meijers 5w20 PP at $1.92 a quart and changed it out last week and sent my son back on his way to college in Illinois. I gotta believe PP in 5-20 is tough enough for an engine that calls for 5-30.

Well I just put 5W-20 in by 2004 Corolla but it wasn't an accident I did it on purpose. It'll be just fine trust me!
You must log in or register to reply here.