I had another rust belt belt victim today. My daughter's 2015 Versa sedan with 56K miles on it. I had noticed some oil stains on my driveway where she parks . Popped the hood as soon as I could and noticed ATF all over the place. I got it up on ramps in the garage to find where it seemed to be seeping from the steel portion of the ATF cooler supply line where it runs along the radiator support and snaps into place on the lower fan shroud. When I wiggled it it really let loose and ATF began running out of it. This would have stranded her for sure.

These are cheap cars and the underpinnings, even though being painted/treated rust unbelievably quickly. Especially any fasteners. There's spots on the transmission pan that are rusted/bubbled so badly I don't think the pan would last another year. The bolts that hold the engine oil pan and trans pan have some bolt heads that are rusted mostly away. I've treated this vehicle with fluid film and woolwax over the past 2 years we've owned it, but given the underside is fully exposed, it all wears off quickly. I did not treat the ATF cooler lines.

I replaced the cooler line assembly with a section of 5/16" ID rubber hose I got from Napa. It took 3 parts stores to fine this size, which sucked and they all want ~$30 for a gallon jug of maxlife ATF, so I had to make a trip to wally to get a jug for $17. Napa charged me almost $14 for 3 feet of Gates 5/16" oil line/hose. This 2015 Versa has the old school 4spd AT as opposed to the CVT. Either model uses the same transmission fluid cooler lines FWIW. 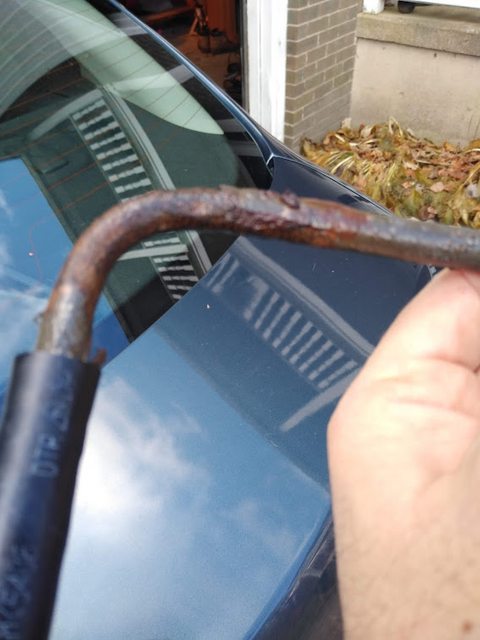 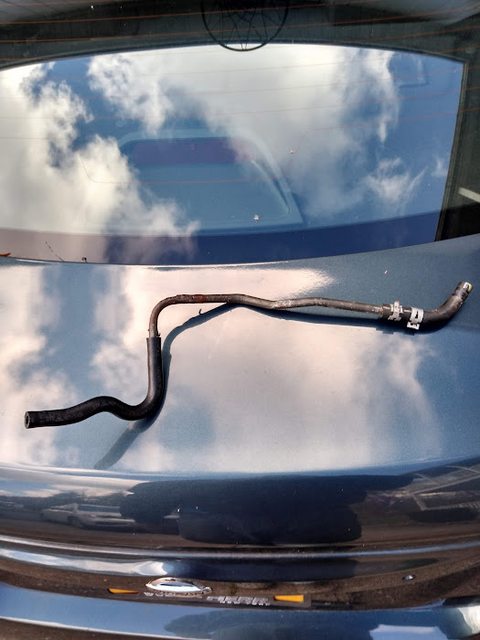 I guess they drove on the interstate, in the winter right behind the plow truck? That is crazy deterioration.

That's amazing, They should have used Stainless Steel lines for such a critical area

MolaKule said:
That's amazing, They should have used Stainless Steel lines for such a critical area
Click to expand...

For sure. Even plastic or all rubber hose would be better. The hose I replaced the assembly with doesn't look too hackish. I did mail-order the OEM Nissan assembly with the steel portion off the FleaBay for $30 shipped a few days ago, but I'm quite sure I won't be using it. It might even be just the metal portion. The pic from the listing showed the two end hoses as well, but who knows. The car had been laid up since Friday. I didn't have a chance to fix it until today (4 days later).

I slathered some Rustbullet rust converter paint on the trans and engine oil pans, bolts, and the ATF cooler return line where I could.

I guess they drove on the interstate, in the winter right behind the plow truck? That is crazy deterioration.
Click to expand...

Does your 2014 Note have any plastic shielding under the engine? It's all wide open under there on the 2012-2019 sedan version of this vehcle. Salt spray winds up everywhere. Things like the battery tray even fill up with dirt/grit. I forgot to mention it above, but the steel on the lines above rusted right where it snapped into to plastic channels on the lower radiator shroud. Apparently those areas hang on to the salt. You'd never know this was going on unless you have the vehicle in the air and your looking right at it.
J

be careful you don't let that rubber line pinch or rub. I lost a trans with a pinched rubber cooler line before.

JustinH said:
be careful you don't let that rubber line pinch or rub. I lost a trans with a pinched rubber cooler line before.
Click to expand...

Thanks Justin. I'll keep an eye on it. It's about a 2ft run of hose. I used a zip tie right about in the center to help keep it from rubbing on the starter. Left some slack to account for engine movement as well. At ~$4/foot that hose better be gold. LOL
D

I just replaced the trans cooling lines on my sisters 2011 Fusion because of rust. Absolutely no room on that car with the 3.5l engine so it was easier to pull the front bumper and bar to get to the one connection

Dan that's one thing this job had going for it. Easy access. The hose barbs on the right side of the radiator are a bit of a squeeze, but other than that, most things aren't bad to get your mitts onto on these cheap little cars.

The OEM replacement steel line assembly came the other day. p/n 21634-3HC3A in case anyone needs it. It comes with the short section of hose that goes to the radiator barb. It does not come with the section of hose pictured to the left on the above pics.
You must log in or register to reply here.