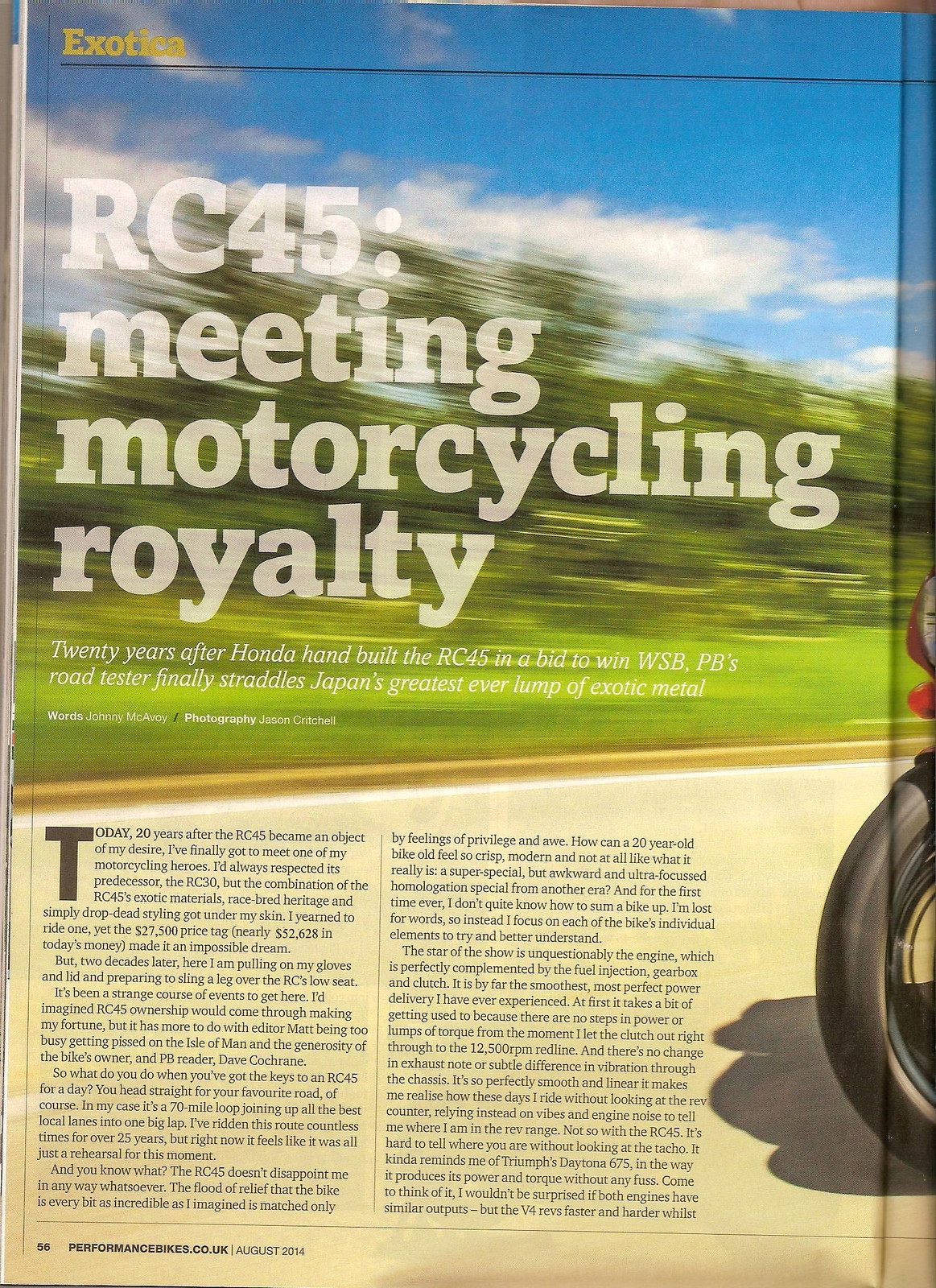 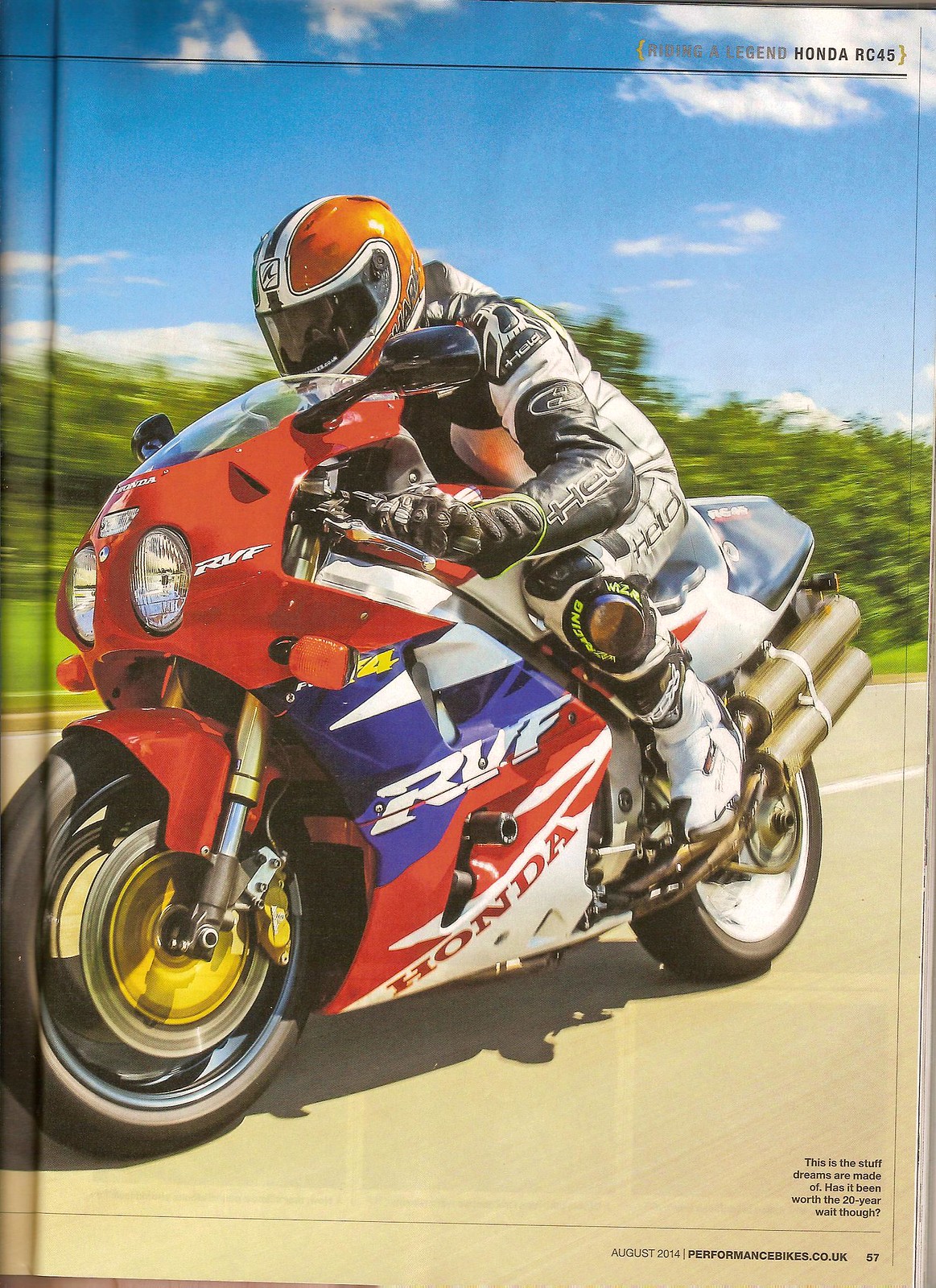 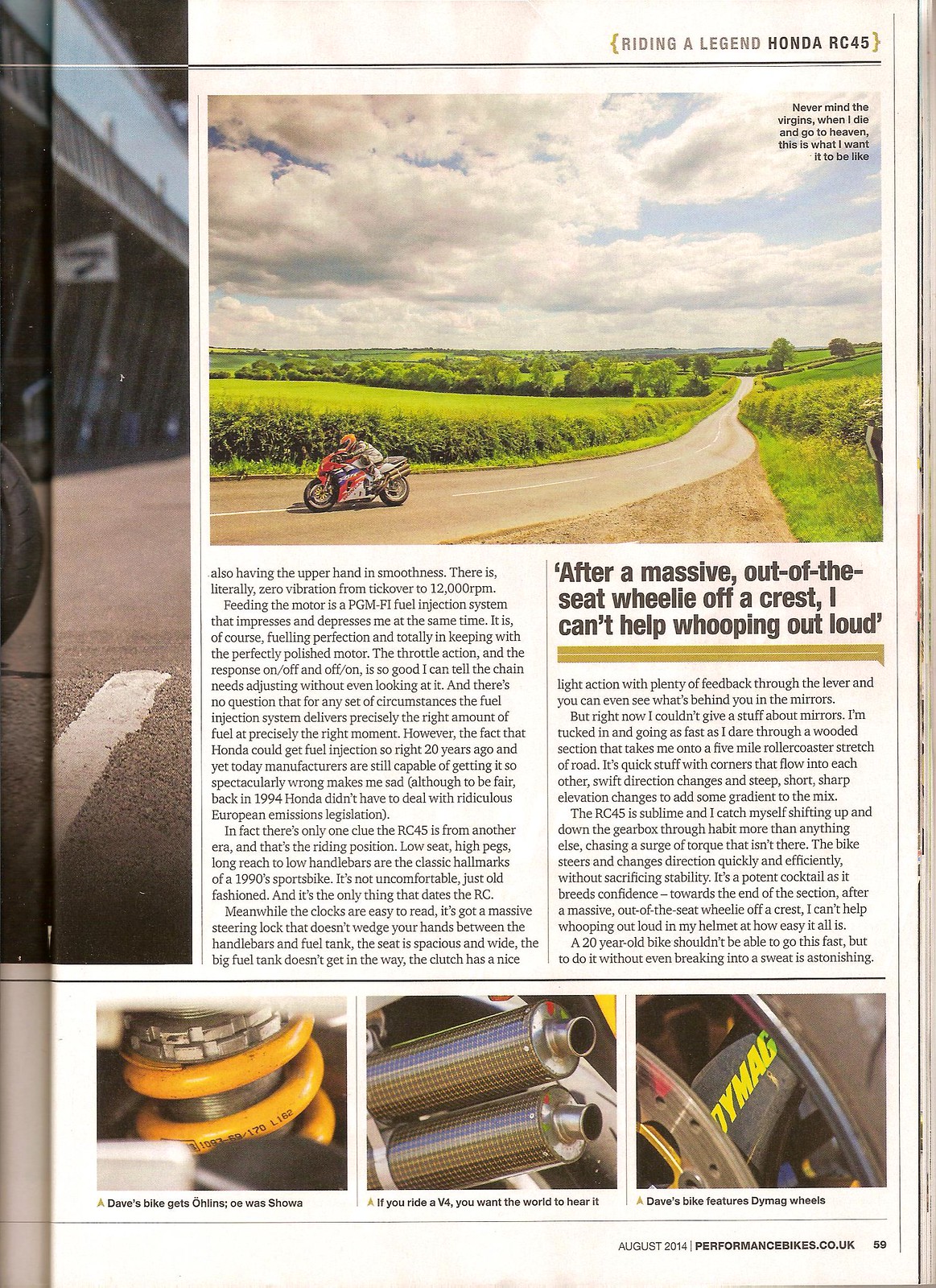 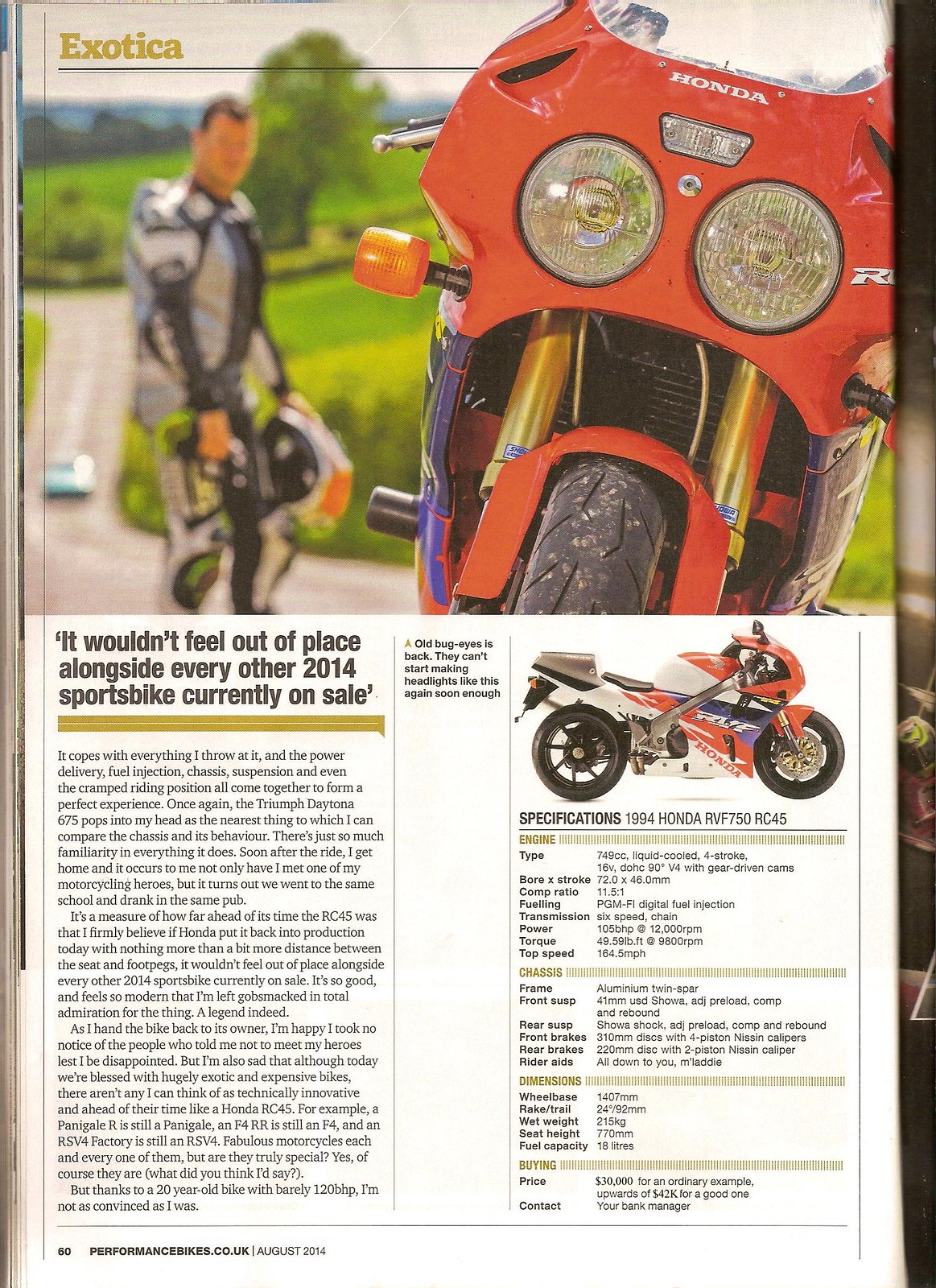 105hp. I remember the Cycle world test. Beautiful bike but a 600 back then would out run it.
R

This makes me miss the Honda of old. Yamaha too. In days past, they could let the engineers do their magic. When was the last time a seriously innovative bike came from Japan?
R

This last year Yamaha brought out an innovative idea in their SR400....the kick start only fuel injected bike. haha!!!!
W

I actually like the idea of the SR400. It's not exactly the pinnacle of engineering, but one set up like a cafe racer or a scrambler would be fun.
S

Originally Posted By: Robenstein
Originally Posted By: eddy21
105hp. I remember the Cycle world test. Beautiful bike but a 600 back then would out run it.
The Yamaha fzr600 of that time had 89hp The Kawasaki Ninja 600 had 77hp The Suzuki GSX 600 had 89hp A 600cc sportbike of today would outrun the 20 year old honda, but back in 94 from what I have seen of the specs of its 600cc competitors, it outclassed many 600 sport bikes. The Suzuki GSXR 600 did have comparable HP though...was not able to find the torque specs.
Are those HP numbers at the rear wheel ? What year did they change where HP is measured ? My 81 KZ has 100HP but I think that's at the engine. I like the older 90's sportbikes.
Last edited: Jul 28, 2014
R

On cars they changed to net HP in 1972, not sure on the bikes. I know Triumph still lists HP at the crank on their bikes. But I gleaned the info from one place when I googled around for 1994 600cc sportbike specs. As for the SR400...it is neat, but look at the MSRP. It is wayyy too high IMHO.

Originally Posted By: eddy21
105hp. I remember the Cycle world test. Beautiful bike but a 600 back then would out run it.
I've got the 94 Cycle World test and all 56 North American RC45s were limited by American Honda to 89HP but owners where encouraged by an HRC memo that spelled out how to cut and splice 3 wires leading into the ECU for a power jump to 108HP... I think if you were lucky enough to compared an RC45 to a 600 it would be clear that power band on Mr.Honda's race bred V4 offers it all... bottom end plod... mid range grunt... top end rush whereas the 600 would mainly offer top end rush... Quote Superbike "All parts of the RC45 gel into a totally user friendly package, the V4 motor has stacks of low and mid range power, perfect for bombing out of corners at 6000rpm and lugging it all the way through the gear and 140mph before you know it. Strong mid range gives way to a strong top end and keep the RC45 above 10,000rpm for any length of time in any gear and you'll be snapping at 1000cc bikes the whole way. Speed comes quickly, but more telling is that speed comes in places where you didn't think it was possible." Quote Fast Bikes "In view of the modest stock HP claims, we didn't expect particularly startling grunt from the engine as most of the manufactures have been claiming 125BHP as a matter of course for their 750 replica superbikes. Quite unexpectedly, the RC45 forced us to think again; it's HP combined with formidable torque in the middle gears and the extraordinarily clean and rapid response provided by the fuel injection system make an explosive mixture which measures more like 130RWHP through the only barometer which really counts- the seat of your pants."
R

Most of the 600's I saw also must have much different gearing as their top speed was also less. A very linear power curve is a very nice thing to have in a bike.
W

Originally Posted By: sunruh
Originally Posted By: whip
This makes me miss the Honda of old. Yamaha too. In days past, they could let the engineers do their magic. When was the last time a seriously innovative bike came from Japan?
oh you mean like the 2014 YZ250F or the 2010 YZ450F or the 2001 YZ250F or the 1998 YZ400F in '98 and '01 Yamaha ***TOTALLY*** changed the face of motocross.
At the risk of highjacking this thread, I'll admit to being somewhat ignorant of MotoX bikes. What were the innovations that Yamaha developed that were game changers on these bikes?
S

first a little history: Facing tightening emissions regulations, in 1997, the A.M.A. increased the allowable displacement capacity for four-stroke engines, in an effort to encourage manufacturers to develop environmentally friendlier four-stroke machines.[3] In 2006, the 250 cc division was renamed the MX Class, with an engine formula allowing for 150–250 cc two-stroke or 250–450 cc four-stroke machines.[4] The 125 cc class was renamed the MX Lites Class, allowing 0–125 cc two-stroke or 150–250 cc four-stroke engines. In 2009, the MX class was renamed the 450 Class and the MX Lites class was renamed the 250 Class, to reflect the fact that all the competing manufacturers had adopted four-stroke machinery. in 1998 Yamaha brought to the SX/MX world the first true competition worthy 4stroke racebike that could not only run with the 250 2strokes, but beat them. in 1998 Doug Henry won the AMA 250 MX Championship on the YZ400f...the 1st 4stroke to do this and used the 5valve patented technology off of the fzr750 streetbikes. it would take the other brands several years to even produce the same bike. in 2001 Yamaha stunned the world again. Doug Dubach had been testing the yz250f in public by putting yz400f stickers on it. nothing says secret quite like doing in the open public! using the R1 street bikes 1 cylinder, the YZ250F totally took over the AMA 125 SX competition and Ernesto Fonseca won that title. the first 4stroke to win that class title. the Yamaha YZ250F was the only 4stroke in "racing" form from any brand until the 2004 year. totally alone for 3 full years. while cannondale (defunct) may have started the reverse motor, for 2010 Yamaha introduced the YZ450F with the intake in the front, exhaust out the back, rearward slanted motor. yes, husaberg had also done this, but show me one that won something with it. http://www.yamahamotorsports.com/sport/products/modelgallerylib/209/1/0/gallery.aspx now in 2014 Yamaha did the same with the YZ250F...rearward slanted motor, intake in front, exhaust out the back. http://www.yamahamotorsports.com/sport/products/modelgallerylib/12/1/0/gallery.aspx when the other brands finally caught up to the revolution that Yamaha started, all factory teams where on 4 strokes and have been since. not a single 2stroke has won an AMA MX/SX event since 2006. (maybe even 1+ years earlier than that i cant prove the exact date). when you completely change the face of an entire sport, you are clearly the leader and innovator! steve
W

Steve, I'm not taking anything away from Yamaha. There's a reason Toyota has them build their high performance engines. The 98 YZ400F was a great bike, but that was 16 years ago. That's my point. The Japanese haven't had a lot of innovative bikes in a long time. Look at the Cycle World 10 Best List. 7 European bikes, 2 Japanese, and 1 American. Just 10 years ago, the Japanese dominated it.
J

For Yamaha, Other than the reversed cylinders on the MX bikes, Most recently there is the FZ09 triple that is selling pretty good. Maybe not inovation, but different. Also in 2009 was the cross plane crankshaft in the R1. The economic downturn has been rough on the Japanese.
You must log in or register to reply here.

at least it missed the bike...