Previous owner said it was Castrol Edge 5w40 505 oil. He was fueling up exclusively with this stuff they sell in the SF area which is B20 and Renewable Diesel blend. This hippy fuel is expensive at nearly $5 a gallon. He had about 3K on this fuel and I started filling up with D2 for 3K. I guess this is the reason the soot was so high. I usually see a soot value 1/2 from this UOA on Cali D2 or pure Renewable Diesel as fuel. He was also only averaging 32 MPGs while I'm at 44.3 with D2. Car History: New to me 2003 Jetta GL. Alaska Green w/ Beige interior 272K 5MT Stock except for Bosio PP357 injectors installed about 50K miles ago. Long Beach wheels Bilstein B8 Yellow struts and lowering springs Car has many new parts including wheel bearings, N75, MAF, Alternator, Stoptech Drilled/Slotted rotors and ceramic pads, Re-sealed injection pump, Cooling fans, etc.. I found this car on craigslist for $1500 with 269K. I thought it was a scam because it was so cheap. The guy selling it was the original owner who lived in a very nice house, like 4-5 million dollar pad. He had all the maintenance records and an excel file of repairs. He had VCDS and was kinda a shade tree mechanic. He ran this car exclusively on a B20 & Renewable Diesel blend sold in the SF bay area. Tires were gone and it had a disclosed coolant leak. Also was throwing a coolant level or over temp chime alarm. It drove OK though and passed smog so I bought it anyway as I believed the guy was genuine and it was a great deal even with the issues it had. My mechanic replaced the CTS and expansion tank. Flushed the coolant and Brake/clutch fluid. He noted some wetness on the power steering hose but couldn't find an actual leak, so minor issue not needing attention. He did not recommend any other work at that time, other than replacing the tires and radiator due to their age. It has the original injection pump and turbo. I've driven it for about 3K miles. I replaced the tired Battery with an H7 AGM. It has 4 new Yokahama Avid Ascend 215/50R17 tires. I'm into it for now for about $2500. It's averaging 44.3 MPGs on fuelly. I just did my first maintenance, changed the oil to M1 TDT 5w40 + Ceratec and replaced the gear oil with 50/50 Redline MT LV and Superlight shockproof. Enjoy! 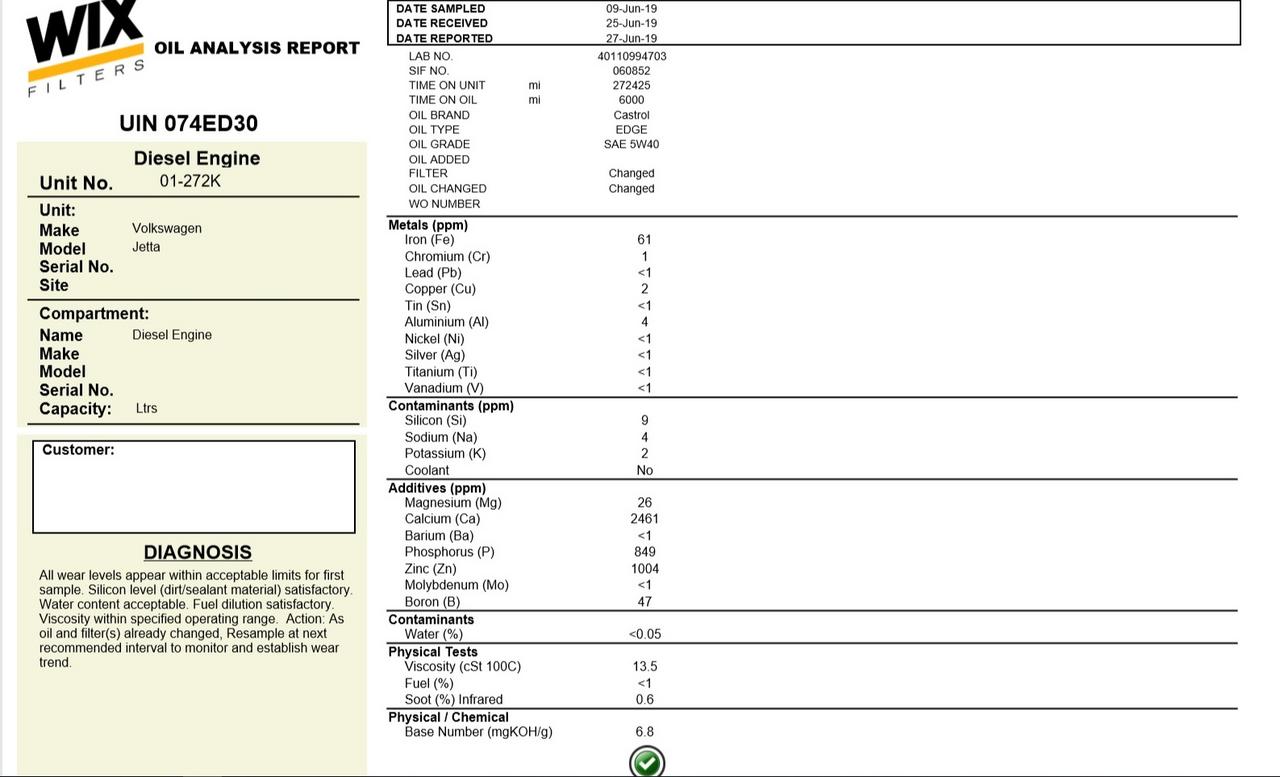 That's a decent UOA. Wonder why so many people say this oil is bad?
C

Originally Posted by Bailes1992
That's a decent UOA. Wonder why so many people say this oil is bad?
I don't know about "Bad", but the UOA isn't very impressive. The VW 1.9 ALH doesn't shed iron like the later 2.0 does. 10ppm/1k isn't very good. Could be related to the higher soot. With the M1 TDI in the sump it should be half that much iron or less now.
D

No; all these VW little diesels shed Fe. It's just their nature.
C

Originally Posted by dnewton3
No; all these VW little diesels shed Fe. It's just their nature.
I don't think that's an accurate statement. The last UOA I ran with TDT on my '03 Golf TDI, the iron value was 2ppm/1k miles. This sample with Edge is 5x as high. It's a different car but they have the same engine. I suspect the iron will be significantly less at my next interval.
A

Mine was also high with nozzles, I have a feeling the exhuast was a pretty big choke point and sooting things up. I added a 2.5" high flow turbo back exhaust with high flow cat, hoping that brings it down. Im going to recheck after the next change to see, but I believe mine was in the 80s as well.

Originally Posted by edyvw
Originally Posted by Bailes1992
That's a decent UOA. Wonder why so many people say this oil is bad?
There is Castrol Edge 5W40 Turbo Diesel with specification VW 505.01 And there is Castrol Edge 5W40 with VW 505.00 and VW 502.00 specification. Turbo DIesel should be more stout. Even if Edge 5W40 that is considered subpar s sued, in this application is not that relevant.
The maintenance spreadsheet I got with the car says "Edge 5w40" VW 500.00, so I think it is the oil in the black bottle, VW 505 stuff.
Originally Posted by Audios
Mine was also high with nozzles, I have a feeling the exhuast was a pretty big choke point and sooting things up. I added a 2.5" high flow turbo back exhaust with high flow cat, hoping that brings it down. Im going to recheck after the next change to see, but I believe mine was in the 80s as well.
My other 2003 TDI, The Golf, actually has bigger nozzles and a malone stage II tune w/ stock exhaust. Both cars have the EGR system intact but turned down to minimum flow using adaptation in VCDS. The Golf had 2ppm/1k miles of Iron and soot was 0.03%/1k miles. No issue with soot at all the Golf, it will create light smoke over 3000 RPM, but it usually burns extremely clean on California D2 + fuel additive. If you have soot problems I'd be looking at your fuel quality or possible air/fuel issue. I think the higher iron wear in the Jetta is due to the oil choice and questionable fuel causing higher soot which is 0.1%/1k miles.
Last edited: Jun 30, 2019
P

This oil could have easily gone over 10k miles. Look at the Base Number!
C

Originally Posted by Provi
This oil could have easily gone over 10k miles. Look at the Base Number!
Yeah but he was running on Biodiesel. Biodiesel migrates into the oil so it must be changed earlier than necessary.

Originally Posted by Kamele0N
If its PD (pumpe-duse) engine it needs either vw505.01 or vw 507 oil....otherwise that iron is coming from its camlobes...
It's an â€˜03 ALH which is the last year for the rotary pump TDIs in North America. I don't think I'd ever buy a any VW with a PD 1.9. M1 TDT works great with both VE and PD 1.9s. It's a good value too.
You must log in or register to reply here.