I have a 1996 Grand Prix I purchased with a bad head gasket-- had a bunch of coolant in oil, coolant burping from overflow tank, overheating issues. Was probably abused something hard, previous owner had the cooling fans jerry-rigged to run 100% of the time, so was likely overheated a bunch. I tossed the heads and put re-manufactured heads from Rockauto on there, replaced head gasket and every other gasket I came across. Engine runs fine afterwards but at the time of this sample I was very concerned it might still be getting coolant in the oil-- oil appeared to be getting brown very quickly and I was seeing a lot of what appeared to be steam under the oil cap. Could detect combustion gas / exhaust smell in coolant overflow. I've since driven it another 500 miles or so since this sample and haven't lost a drop of coolant, so my fears of the new head gasket not taking have mostly subsided. I suspect the "steam" I'm seeing under the oil cap is normal oil mist and/or possibly excessive blow-by. The coolant still smells a bit "off," but I think it just needs another flush or two, perhaps due to how long the engine operated with the bad head gasket. I should note that prior to this sample I changed the oil twice-- new oil immediately after the repair, then again after 5-10 miles with this fill in an attempt to flush all the residual coolant out. So I consider this UOA to be a baseline-- I'll have another UOA performed after about 2k and if there's no coolant contamination in that sample (or numbers are still declining) then I should be able to put the head gasket issue to bed. Presently the engine runs just fine, no overheating and has been returning 26-27 mpg mostly highway miles. I was probably just being paranoid, but if nothing else you can treat yourself to a near virgin analysis (VOA) of Rural King's Harvest King All-Fleet (CK-4 rated) 10w-30 oil. I like what I see in the oil, lots of phos & zinc, always thought that CK-4 oils were neutered in that regard, but I guess not. 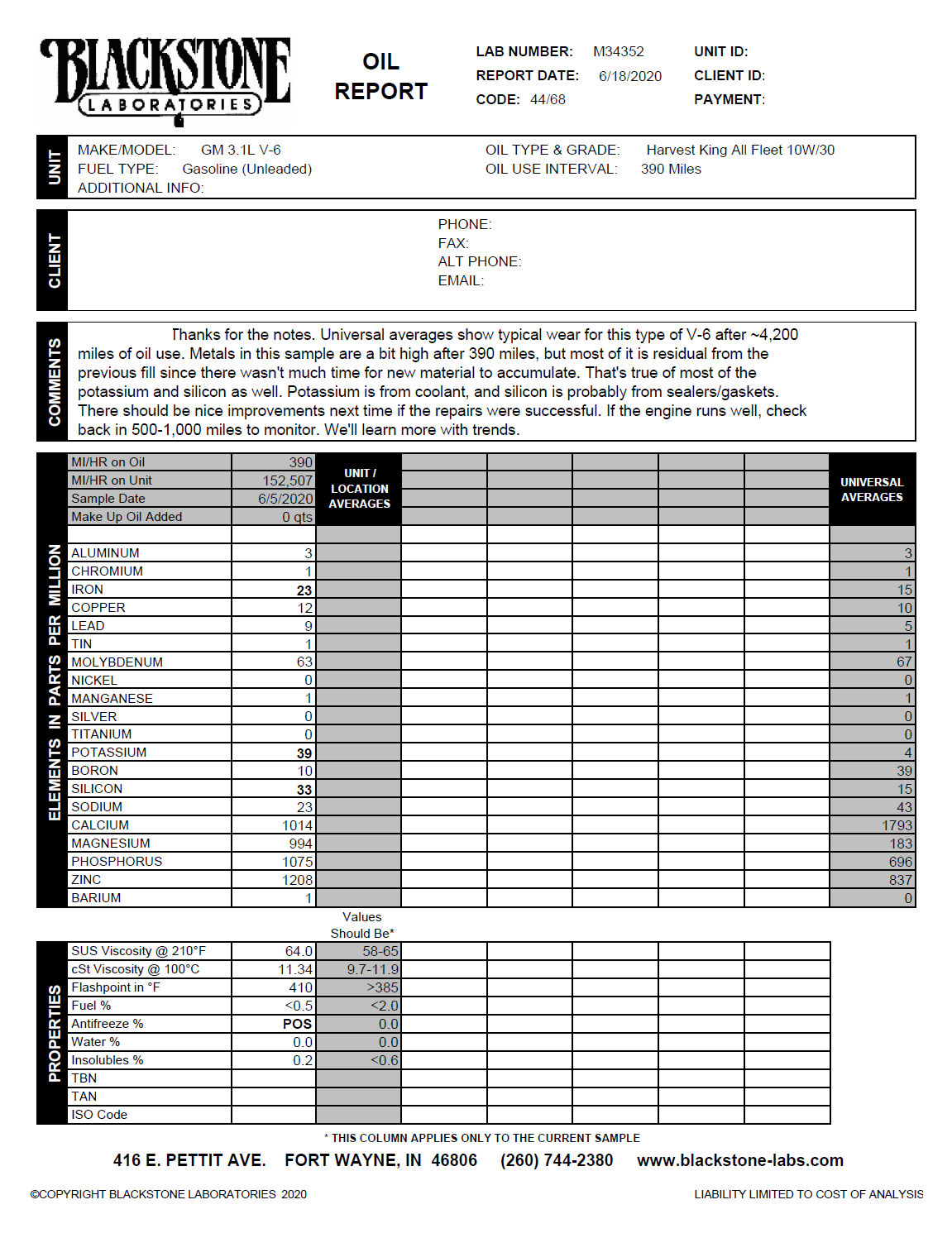 You've made quite an investment in that grand Prix. I always liked their look vs the next generation. Hopefully it gives you plenty of trouble free miles. Also, something I've done, save the oil from another car for these short flush runs. I have a jug of Pennzoil with 3k on it from another one of my cars just for this purpose
T

One of my ex's had a 94 years ago. It had really bad piston slap and needed intake gaskets but otherwise ran and drove like new. I kind of miss that car. They weren't exactly put together really well (fit and finish) but it had a unique interior and comfortable seats. Always started.
D

Location
Ice Box of the Nation

They were good cars...back when GM could still make em good
S

Originally Posted by 92saturnsl2
I have a 1996 Grand Prix I purchased with a bad head gasket-- had a bunch of coolant in oil, coolant burping from overflow tank, overheating issues. Was probably abused something hard, previous owner had the cooling fans jerry-rigged to run 100% of the time, so was likely overheated a bunch.
That's like picking up a stray cat with one eye and one and one half ears. Good on you.
Originally Posted by 92saturnsl2
a near virgin analysis (VOA) of Rural King's Harvest King All-Fleet (CK-4 rated) 10w-30 oil. I like what I see in the oil, lots of phos & zinc,
Yes strong zinc at 1200 ppm, a nice drop of Moly at 60 ppm, and a modern Ca + Mg LSPI friendly detergent package. It should be shear stable too, being a 10W30 HDEO. Looks like a good oil for an old school car. I bet you paid a good price for it too.
You must log in or register to reply here.